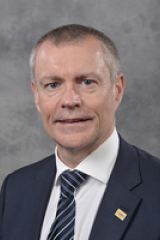 Matthew Smith served as Alltech’s vice president of Asia-Pacific from 2011–2019. Working in the feed industry for more than 27 years — 22 of which have been with Alltech — Smith has traveled extensively in Asia, Europe and North America.

Smith relocated from the U.K. to become the general manager of Alltech New Zealand in 2009 before being promoted to his regional role. In 2018, Smith returned to live in the U.K., taking responsibility for Alltech E-CO2, the global rumen function platform and Alltech U.K. He also continues to oversee parts of Alltech’s Asia-Pacific network.

Smith began his working career on a dairy farm in the U.K. before receiving a business law degree from Coventry University and then a solicitor’s final qualification from the College of Law, Chester.