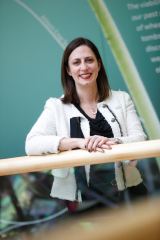 Orla McAleer is chief marketing officer at Alltech and is responsible for overseeing the company’s global marketing efforts across its more than 120 markets. She also oversees the company’s marketing activities, including brand building, corporate and digital communications, customer programs and corporate events.

McAleer held several marketing and communications roles before joining Alltech at its European headquarters in Ireland in 2003 as European public relations manager. She was promptly promoted to communications manager for Europe and Asia in 2004. In 2008, she relocated to Bangkok, Thailand, for her role as Asia-Pacific marketing manager, covering 17 countries. She returned to Ireland to head up the European marketing function in 2010. She was also heavily involved in the corporate brand sponsorship of the Alltech FEI World Equestrian Games™ in 2010 and 2014. In 2016, she became responsible for Alltech marketing globally.