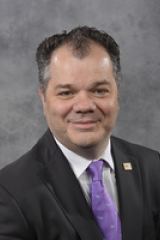 Vice President of Europe at Alltech

Patrick Charlton is vice president of Europe at Alltech, overseeing all of the company's European business. Previously, he was CEO of Alltech Coppens, a specialist aquaculture feeds company, which was acquired by Alltech in 2016.

Over the 30 years he has worked for Alltech, Charlton has held a number of roles, both regional and global, giving him a broad overview of the company and its global business.

He graduated from the University of Nottingham in the U.K. and joined Alltech U.K. in 1991, becoming the technical manager in 1995. In 1998, Charlton moved to Cape Town, South Africa, to become technical director for Alltech in Africa and the Middle East, working with customers throughout the region.

Charlton took on the role of general manager of Alltech Canada in 2000, working with customers, consultants and researchers across Canada. In 2005, he was promoted to global Bioplex® manager, responsible for all activities relating to the Bioplex series of organic minerals.

Charlton currently lives in the U.K. and received a master’s degree in fermentation and distilling from Heriot-Watt University in 2006.