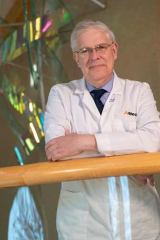 Dr. Ronan Power is vice president and chief scientific officer at Alltech. Since 2002, Power has been based at the Alltech Center for Animal Nutrigenomics and Applied Animal Nutrition in Nicholasville, Kentucky, USA. He maintains a broad range of research interests related to the application of Alltech products in animal nutrition and human health, with an emphasis on preventing syndromes and diseases associated with mitochondrial dysfunction and gastrointestinal stress.

Power joined Alltech in 1991 as European director of research, initially based on the campus of the National University of Ireland, Galway, where he was an adjunct professor in the Department of Biochemistry. During this time, he also directed Alltech’s regulatory affairs division in Europe. In 1998, he re-established Alltech’s European Bioscience Centre at its new headquarters in Dunboyne, County Meath, Ireland, where he maintained an active graduate student program through which many Ph.D. and Master of Science candidates have successfully obtained their degrees.

He received a bachelor’s degree in microbiology and a Ph.D. in biochemistry from the National University of Ireland. Afterward, he completed his postdoctoral training in cell biology at Baylor College of Medicine in Houston, Texas, where he studied aspects of steroid hormone action in reproductive physiology and disease.