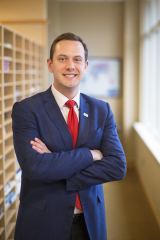 As chief operating officer, E. Michael Castle brings integration to Alltech’s operational and support teams globally, ensuring that they work in alignment and collaboration toward the company’s ambitious goals for growth and Planet of Plenty™ vision.

Most recently, Castle served as executive vice president at Alltech and CEO of the Alltech Feed Division, which comprises several recently acquired companies that specialize in premixes, complete feeds, nutrition blocks, specialty products and technologies. Appointed to the position in May 2016, he was responsible for the division’s focus on delivering greater efficiency, productivity and sustainability to the farm and ranch, and improving companion animal nutrition. Castle also assumed leadership of Alltech’s North American commercial efforts in 2018.

He received a bachelor’s degree in chemical engineering with a minor in mathematics from the University of Kentucky and a Juris Doctor from Washington University in St. Louis.

Castle serves on the Kentucky Chamber board of directors and executive committee.