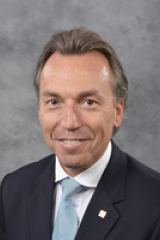 Dr. Marc Larousse is the vice president of business development at Alltech and manages partnerships and merger and acquisition strategies for the company. He graduated from the National Veterinary School of Maisons-Alfort and later received his master’s degree in business administration at the Groupe HEC in 1993.

Additionally, Larousse served as vice president of Europe for Alltech from 2008 to 2011. He has been involved in the merger and acquisition activities of the company since 2011. During this period, he also took on regional responsibilities in the Middle East and for Alltech Crop Science in Brazil and Europe.