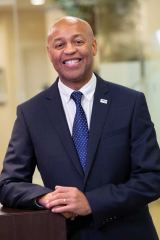 As vice chairman of Alltech, Alric Blake chairs the executive committee. Prior to his current role, he served as chief operating officer and also spent four years as CEO, appointed by Alltech’s founder, Dr. Pearse Lyons. In this capacity, he was the highest-ranking officer outside of the Lyons family.

Upon joining Alltech in 1996, Blake had direct responsibility for the launch of the global ERP system as the associate director of finance. In 2003, he was promoted to director of finance for Europe and Asia, and, in 2007, he became responsible for the development of group financial and strategic planning. In 2011, Blake became vice president and CFO, with direct responsibility for Alltech’s global finance activities as well as managing directorship of the Alltech U.K. office. He was responsible for mergers and acquisitions globally until 2018.