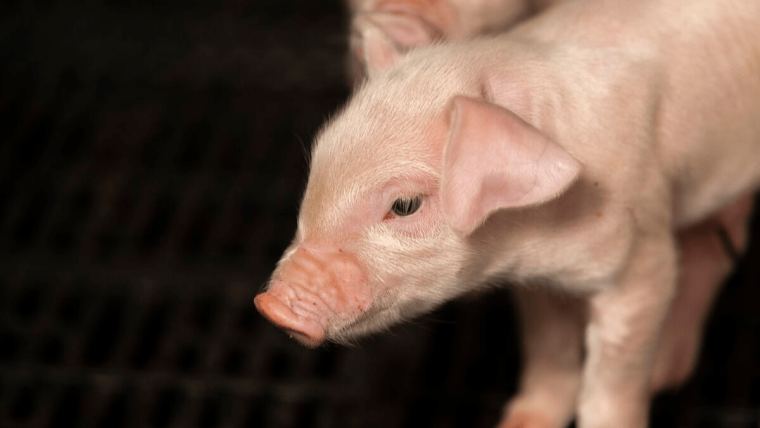 Dr. Henrique Cemin, senior swine nutritionist at Hubbard Feeds, speaks about the role of nutrient sources in caring for sick pigs at the Alltech ONE Conference 2022.

Pig mortality is one of the biggest challenges the swine industry faces today. Data from the USDA (2015) shows that in the United States, the average post-weaning pig mortality is 3.6% in the nursery and 4.1% in the grow-finish stage. Combined with an average pre-weaning mortality of 10–15%, it is not uncommon to observe overall mortality rates of 15–20%. That represents a significant inefficiency in our system that must be addressed if our industry wants to become more profitable and more sustainable.

The first point that must be addressed is understanding the causes of mortality. As part of the Improving Pig Survivability project, Gebhardt et al. (2020), a team effort from Iowa State University, Kansas State University and Purdue University, conducted a review of the most relevant data and observed that the vast majority of pigs die because of respiratory disease (caused by agents such as PRRS virus, influenza A virus, circovirus and Mycoplasma hyopneumoniae), followed by scours/diarrhea (caused by E. coli, PED virus and rotavirus, among others).

A few strategies have been shown to produce a significant positive impact on pig survivability. Management tools such as biosecurity, pig care, temperature and ventilation control, water availability and quality, cleaning and disinfection, and increasing the weaning age can drastically change mortality and removal rates (Main et al., 2005; Faccin et al., 2020, Gebhardt et al., 2020). Additionally, novel technologies such as feed mitigants (Dee et al., 2021), microbiome modulation and gene-edited pigs are promising tools for the future. However, as nutritionists, we must ask ourselves: Are there any strategies that we can implement through the feed to help alleviate the losses in performance or reduce the number of pigs our customers lose to any given challenge?

Crude protein is probably the most researched and consistent nutritional tool against enteric challenges in pigs. The newly weaned pig — at around 21 days of age — has a relatively limited digestive capacity, as its gastrointestinal tract is adapted to digest milk exclusively. When piglets are fed a high crude protein diet, in addition to all other stressors of the weaning process, there is a good chance that a significant portion of that protein will not be digested in the stomach and small intestine and, as a result, will reach the large intestine, where it can be used as a substrate for bacterial growth. Consequently, that may lead to diarrhea, poorer performance, increased mortality and an increased need for antibiotics.

Research shows that feeding a diet with 18% or less crude protein can:

It is important to acknowledge that performance can potentially be impacted by feeding low crude protein diets. It is critical to ensure that the pigs’ amino acid requirements are being met. If diets are formulated with synthetic lysine, methionine, threonine, tryptophan, and valine, the next limiting amino acid is likely isoleucine. If synthetic isoleucine is also being used, then histidine likely becomes the limiting amino acid. Research suggests that nursery pigs require around 32% histidine:lysine (Cemin et al., 2018), and a typical nursery diet can easily go below that value.

Protein for the synthesis of non-essential amino acids can also be a limiting factor. It is important to use a lysine:crude protein ratio in the formulation software to understand the maximum inclusion rate of synthetic amino acids. Finally, pigs have a remarkable ability to compensate for poorer performance in the nursery during later stages (Menegat et al. 2020). Feeding a low crude protein diet may result in a slower start, but given the appropriate time and diet formulation, in the later stages, pigs will exhibit compensatory growth and can achieve excellent overall performance.

Carbohydrates can generally be classified as storage or structural carbohydrates. Storage carbohydrates typically refer to starch, which is easily digested by the pig and readily available as an energy source. Fiber, therefore, can be defined as all structural carbohydrates that resist digestion and are fermented in the hindgut (Kerr and Shurson, 2013). Additionally, fibers can be further classified based on several characteristics, such as viscosity and fermentability, but the most common way they are discussed in swine nutrition is based on their solubility in water.

Soluble fibers are rapidly fermented by the pig to produce volatile fatty acids: acetate, propionate, and butyrate. These components can be used as energy sources by the enterocytes, resulting in the proliferation of the epithelium. They also have a prebiotic effect by enhancing beneficial bacteria fermentation while reducing the pH to eliminate pathogens. However, soluble fibers do increase digesta viscosity, which, in turn, reduces the passage rate and predisposes colonization by pathogens. Insoluble fibers, on the other hand, are more resistant to fermentation and do not contribute significantly to the production of volatile fatty acids. However, the main benefit of insoluble fibers is that they increase the digesta passage rate, therefore preventing the colonization of pathogens in the gastrointestinal tract (Agyekum and Nyachoti, 2017).

Considering the differences between fiber sources, what exactly should be fed to the newly weaned pig? Some research suggests that soluble fibers can increase the incidence of diarrhea in early nursery pigs (Pluske et al., 1998). However, it is important to note that this negative effect is driven by the increased viscosity of the digesta and not because of the fermentability of soluble fibers. Therefore, it appears that insoluble fibers are a better recommendation, particularly for weaned pigs (Molist et al., 2010). However, some reports suggest that a combination of both soluble and insoluble fiber could provide a synergistic effect as long as the soluble source has no impact or only a small impact on viscosity (Wellock et al., 2007; Molist et al., 2014).

The effects of soybean meal on PRRS-positive pigs have been previously demonstrated by several researchers (Johnston et al., 2010; Rocha et al., 2013; Rochell et al., 2015). Their studies generally agree that pigs challenged with the PRRS virus have improved performance and/or a reduction in serum viral load when fed high levels of soybean meal. The reasons for the benefits of this ingredient are not fully understood, but one of the hypotheses argues for the presence of bioactive components, such as isoflavones and saponins. These components have several beneficial properties, such as anti-inflammatory, antioxidant and antiviral properties (Smith and Dilger, 2018). Recently, Smith et al. (2020) observed that PRRS-infected pigs fed high levels of isoflavones had a significant reduction in mortality rates. When considered altogether, the data suggests that soybean meal or components of it have the potential to provide some protection, especially against respiratory challenges.

It is generally accepted that pig diseases may cause a repartition of nutrients from growth to their more active and demanding immune system. It is also recognized that certain amino acids have important functions in the immune system, and as such, their requirements can increase during a health challenge. This group of amino acids is known as functional amino acids. For instance, threonine is one of the main components of mucin in the gastrointestinal tract (Wang et al., 2010), methionine is a methyl group donor and tryptophan has the ability to impact the inflammatory response and improve the intestinal barrier (Liang et al., 2018).

Rodrigues et al. (2021) challenged a group of nursery pigs with Salmonella and provided diets low or high in crude protein and with two different amino acid ratios: 1) control ratios or 2) control ratios with 20% higher threonine, methionine and tryptophan. The authors observed that in a situation where there is no health challenge, pig performance was not affected by increasing functional amino acid ratios. On the other hand, when pigs were challenged with Salmonella, those fed the increased functional amino acids saw a significant improvement in performance regardless of the protein level. Therefore, it appears that health-challenged pigs may benefit from significantly higher ratios of certain amino acids, although more work is required with different pathogens and stages of growth.

As part of the Improving Pig Survivability project, Wensley et al. (2021) conducted a series of trials to identify and quantify the benefits of on-farm tools. The authors evaluated mat feeding, a strategy that consists of spreading a small amount of feed on a mat near the feeders with the objective of stimulating feed intake. Utilizing this strategy for 10 days after weaning resulted in a significant decrease in the mortality and removal rate in the nursery. A second study was conducted to evaluate the effects of creep feeding, which consists of supplementing the piglets’ diet by offering feed while they are still with the sow. The authors found improvements in the overall nursery mortality and removal rates by offering creep feed for four days before weaning, particularly if provided in a large pellet format. These two studies show that simple tools can be effectively used to improve pig mortality, although it is important to consider the extra labor involved in implementing these strategies correctly.

Pig mortality is a tremendous challenge for our industry. It is a complex issue that will require a concerted multi-disciplinary effort and that must include swine health, management, nutrition and new technologies to obtain the best possible outcome. As nutritionists, we do have tools available; it is critical that we understand and reevaluate crude protein levels, the utilization of fibers, the potential benefits of soybean meal and the use of higher levels of functional amino acids. Additionally, practical strategies such as mat feeding and creep feeding should be considered. Finally, it is important to consider that each system is unique in its challenges, requiring a complete understanding from the nutritionist to tailor solutions for individual situations.

Pluske et al., 1998. Confirmation of the role of rapidly fermentable carbohydrates in the expression of swine dysentery in pigs after experimental infection. J. Nutr. 128, 1737-1744. 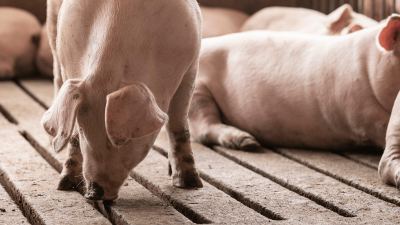 While swine productivity and efficiency continue to increase, gases and odors from livestock operations persist and have become a severe problem, with social implications for many countries. Swine facilities are intrinsically associated with air pollutants and the emission of gases, such as ammonia (NH3), hydrogen sulfide (H2S) and carbon dioxide...