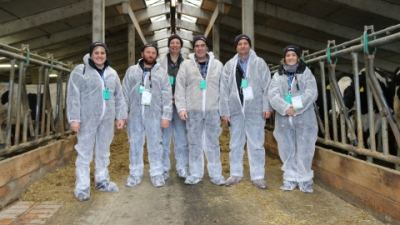 Several of the Irish delegates enjoy a visit to Milsana dairy farm, which has 3,600 cows, in Germany.

[DUNBOYNE, Ireland] – Last week, during Nov. 20 to 24, a group of 130 dairy farmers from seven countries embarked on a European tour of dairy farms with Alltech to learn about new innovations and different approaches being adopted by farmers.

Visiting seven different dairy farms in Germany, the Netherlands, France and Ireland over the four-day journey, the tour also provided a networking opportunity for farmers to discuss and share ideas about the future of dairy production.

The host farms included a German farm near Berlin called Milsana, which has 3,600 cows. Herd health and performance are paramount at this large-scale operation, and it currently achieves 12,000 kilograms per lactation and 27.5 kilograms of dry matter intake. In the Netherlands, the group visited two family farms, one of which is outsourcing heifer rearing and calving at 22 months as well as placing emphasis on excellent silage management and quality to drive farm efficiency and performance.

Farm diversification was a common theme in each country, with biogas plants present on several farms in order to generate alternative sources of revenue and sustainable energy. In addition, a German farm showcased how it is developing its own brand of milk and selling it on-farm as well as a Dutch farm that welcomed the group to it’s very impressive new B&B facility.

In France, the group had the opportunity to visit Drakkar Holstein, a well-known genetics specialist selling high-genetic value animals, embryos and semen around the world. It also hosts an annual on-farm auction. On the final day of the Alltech Euro Tour, the group learned about Ireland’s unique grass-based system and seasonal calving at John Wynne’s impressive unit in County Wicklow, which is currently achieving a 72 percent conception rate to first service.

In addition to farm tours, the group heard presentations on the global dairy market outlook from Dr. Markus Fahlbusch from the University of Göttingen in Germany as well as the impact of digital technologies on dairy farming from David Hunt, CEO of Cainthus.

“The Alltech Euro Tour is a clear reminder of the desire for farmers to meet with, learn from and share experiences with neighbouring farmers across Europe,” said Julien Martin, Alltech regional director for Northwest Europe. “With many changes and uncertainties across the agricultural industry, the benefits of travelling to see what other farmers are doing, engaging in group discussion and idea sharing on occasions such as this are so invaluable.”

The tour experiences made a strong impression on the participating farmers, with one farmer in his 60s admitting that, instead of looking to retirement, he is now eager to take on some new projects, including a biogas plant, on the family farm.

“Alltech is extremely proud to have brought together this fantastic group of seven different nationalities,” added Martin. "We hope each attendee has walked away with at least one new idea to improve or change their business for future sustainability.”