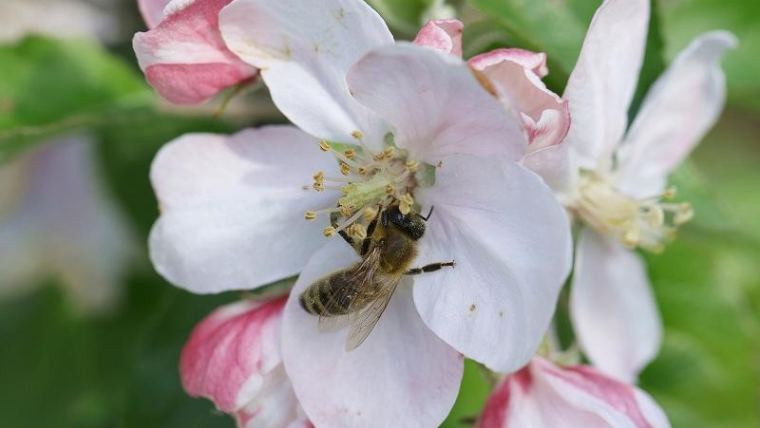 The buzz of the beehive is growing silent. A mysterious grim reaper has been killing off large percentages of the insect population responsible for the majority of the food we consume.

Colony Collapse Disorder is the term scientists have coined for the little-understood cause of an approximately 30 percent annual reduction in the number of bees on our planet. The trigger of such “beecide” may be multifactoral, possibly involving pathogens, parasites, pesticides and environment stressors such as climate change and habitat loss.

The potential impact of this perplexing problem could sting much more than the bees’ own memorable pokes. Seventy-five percent of all cultivated crops are unable to produce without pollination!

Morehead State University in Kentucky is already beginning to feel that sting. The university is home to Browning Orchard, a 250-acre farm that produces 23 varieties of apples. The apples are processed by several local cider mills, are used by the University of Kentucky for hard cider research and also serve as the centerpiece of the university’s much-loved Apple Festival held each autumn.

“We use bees to pollinate our trees. For the past three years, we have lost some of the bees — not all of them, but some of them,” said Amy Poston Lentz, then-horticulture supervisor in the Department of Agricultural Sciences at Morehead State University and team advisor to the 2016 Alltech Innovation Competition undergraduate winners.

Each time they experienced bee losses, a new hive needed to be started, driving up their production costs at the orchard.

So they decided to craft a plan B.

The Pollinizer: A drone alternative to real bees

An undergraduate team of Morehead students, representing a collaboration between the school’s agriculture and business programs, designed “The Pollinizer,” a drone attachment capable of mimicking the pollination activities of a real bee.

Not only does The Pollinizer present an alternative should worst fears be realized and more of the bee population is decimated, but the team noted that their drone attachment can increase and improve yield by working in conjunction with the bees.

After winning first place in the undergraduate category of the 2016 Alltech Innovation Competition in Kentucky, the student team — Jordan Bach, Tessa Combs, Adam Lyon and Dalton Shepherd — is still considering their next steps but plan to pursue a patent. The team is being advised by Janet Ratliff, assistant professor of management/entrepreneurship, director of the Center for Economic Education and advisor for the student organization Students in Free Enterprise at Morehead State University.

Most importantly to them, they say, is the impact this project could have on their school’s orchard as well as the surrounding community. Morehead State University is located in eastern Kentucky, a region that has been hit hard economically by the decline of coal. Lentz noted that reclaimed mountain tops in the area are now becoming apple orchards and small farms.