4 reasons why dairy cows have the luck of the Irish 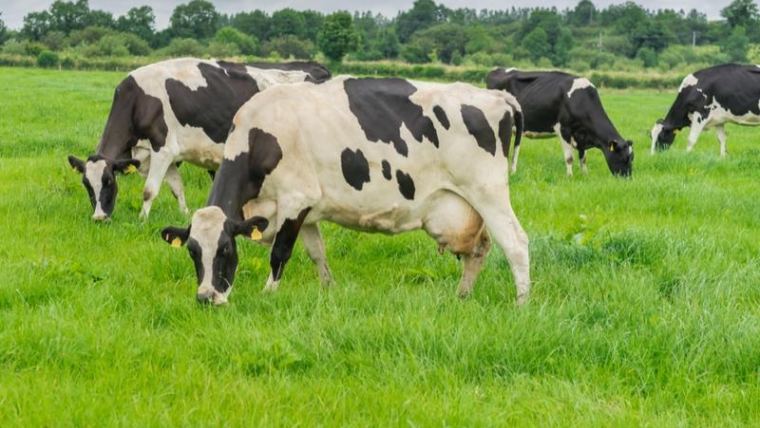 If you’ve ever slathered your bread with rich Irish butter, you may have wondered if the Emerald Isle’s grasses impart some sort of magic to its grazing dairy cows.

And perhaps there is a sort of magic. We’ve put together four reasons why Ireland is a promised land for dairy cows, a place where blessings flow out to the world in the form of butter, milk, infant formula, yogurt and cheese.

Rainfall is common on the island. The east typically experiences 30 to 40 inches of rainfall per year, and the showers are even more abundant in the west, which receives between 40 and 50 inches. But the mountainous regions of Ireland top them all, literally; rainfall there can exceed 118 inches per year!

Generous rainfall, mild weather conditions and rich soils contribute to an abundance of grass for pasture.

In Ireland, the dairy farming schedule is dependent on this grass. When cows calve in the spring, they eat as much grass as they can during their 300-day lactation period. More than 80 percent of Ireland’s agricultural land is devoted to pasture, hay and grass silage for this exact reason! The land area of Ireland is 6.9 million hectares, of which 4.4 million hectares is used for agriculture (DAFM, 2014).

In 2014, the Irish dairy industry had an estimated value of €3.06 billion ($3.61 billion) in exports to 140 countries, and its milk production is expected to increase approximately 50 percent by 2020!

According to the Central Statistics Office in Ireland, 2016 domestic milk output checked in at 6,654 million litres, which led to the production of:

4. There is more than one cow for every four Irish people!

In 2016, the total number of dairy cows in Ireland hit a record high of 1.39 million cows. Comparing this to the population of Ireland of 4.773 million, this means there is just about one cow for every four Irish people.

Come see Ireland for yourself on our Great Green Getaway. U.S. dairy producers with a minimum herd of 50 cows are invited to enter our sweepstakes for a trip to Ireland during St. Patrick’s Day week 2018.

The Irish Times. March 7, 2015. There’s one cow for every four Irish people: the milk facts. Retrieved from https://www.irishtimes.com/life-and-style/there-s-one-cow-for-every-four-irish-people-the-milk-facts-1.2129270

World Trade Center Dublin. March 16, 2016. The Emergence of the Irish Dairy Industry: a Success Story or a False Hope? Retrieved from http://wtcdublin.ie/the-emergence-of-the-irish-dairy-industry-a-success-story-or-a-false-hope/