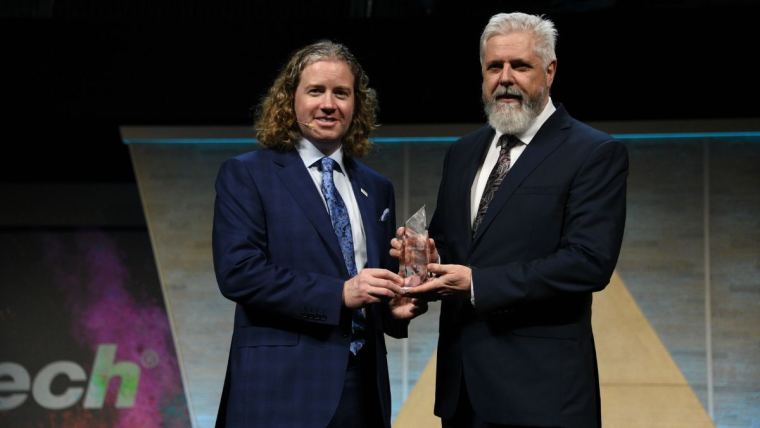 ​Owen Roberts (right), president of the International Federation of Agricultural Journalists (IFAJ), accepts the inaugural IFAJ-Alltech International Award for Leadership in Agricultural Journalism on behalf of Denene Erasmus, editor at South Africa’s Farmer’s Weekly, from Dr. Mark Lyons (left), president and CEO of Alltech, during ONE: The Alltech Ideas Conference (ONE19).

This is a new award that recognizes excellence and leadership by young journalists and honors Alltech’s late founder, Dr. Pearse Lyons. Erasmus was announced as the recipient of the award during ONE: The Alltech Ideas Conference (ONE19), held May 19–21, 2019, in Lexington, Kentucky, USA.

She is a member of the alumni network of the Bloomberg Media Initiative Africa, and holds a master's degree in languages from Stellenbosch University, an honours degree in Media Theory and Practice from the University of Cape Town. She is currently studying towards a degree in economics.

Her writing covers a broad range of topics related to agriculture, agribusiness, African development, rural development and conservation. She has a special interest in stories that examine how global and regional developments within the agriculture sector affects the sustainability of family-owned farms and farming businesses.

She grew up on a family-run sugar cane farm situated along the east coast of South Africa and while she is now based in Johannesburg, she still visits the farm as often as possible.

The award marks a long tradition of celebrating journalistic achievements, as Dr. Lyons was a storyteller himself, and had a great respect for agricultural journalists and appreciated their ability to share the stories of agriculture. He also understood the importance of mentorship and education and in 2005, Alltech co-founded a young leader program with the IFAJ.

“It is more important than ever to give agriculture a voice and communicate our stories to the world,” said Dr. Mark Lyons, president and CEO of Alltech. “Through our continued partnership with the IFAJ, we are able to support future leaders in agricultural journalism who are passionate about connecting our industry to a global audience.”

Samantha Townsend, a freelance journalist from Australia, was the runner-up for the award. She is a multi-award-winning journalist that has been sharing stories for more than 20 years and is passionate about being a voice for agriculture. Her extensive experience ranges from reporting for main-stream and agricultural media, newspaper editor, agriculture media consultant and at times can be found behind a camera.

For more information about the IFAJ-Alltech International Award for Leadership in Agricultural Journalism, contact press@alltech.com.

Video: Watch the video prepared by Denene Erasmus, recipient of the inaugural IFAJ-Alltech International Award for Leadership in Agricultural Journalism.