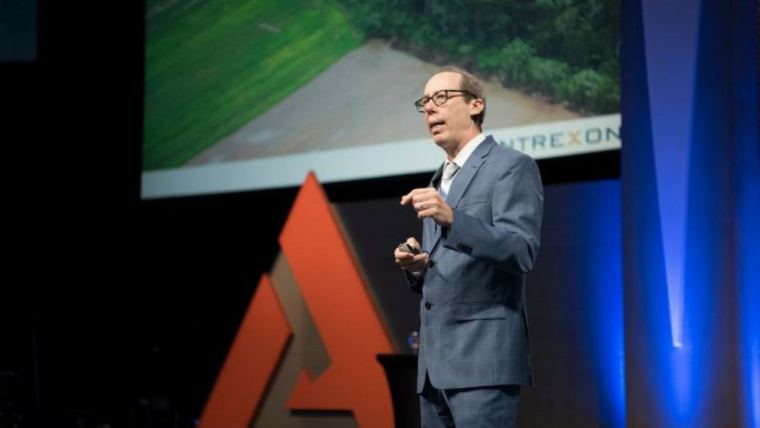 The SoundCloud content at https://soundcloud.com/alltech-1/jack-bobo-can-agriculture-save-the-planet-before-it-destroys-it is not available, or it is set to private.

To listen to our entire conversation with Jack, click on the player.

Tom:              Can agriculture save the planet before it destroys it? That's the question addressed by Jack Bobo, senior vice president and chief communications officer for Intrexon, a synthetic biology company focused on food, energy and health. And we thank you for being with us, Jack.

Can agriculture save the planet before it destroys it?

Tom:              So, “Can agriculture save the planet before it destroys it?” That's a heavy and somewhat ominous question. Let's begin with the destructive nature of agriculture. What do you see?

Jack:               Well, in many ways, there's nothing we do that has a bigger, more negative impact on the planet than agriculture. And yet, there's nothing more critical for our daily survival. The challenge that we have is how to minimize those negatives and grow the benefits.

In terms of land, 40% of all the land on Earth is already devoted to agriculture, and that's a huge amount. The amount of crop land is the size of South America; the amount of pasture land, the size of Africa. So that is a really, really big footprint. If we were talking about water, well, 70% of all the freshwater we consume goes to agriculture. So, again, a huge demand on the planet. We can talk about greenhouse gases and all the other things.

Tom:              We hear an awful lot about the "rising billions," the rise of the middle-class in Asia, in India, in those areas of the world, meaning more demand, which means the need for more capacity.

Jack:               Yeah, so on one hand, we're going from 7 to 9 billion people, and so that's adding a couple billion more people. But perhaps even more important than that is the fact that their incomes are increasing, and so it's not that they're just more mouths to feed, but they're people that want more protein and better nutrition and better products. All of that means that we're not just going to need 30% more food, but we'll need 60% to as much as 100% more food in many places.

Jack:               Well, one thing that can save the planet is innovation and new technologies. Because we need to produce all of that new food using the same amount of land or less, the same amount of water or less. We need to do everything better tomorrow than we're doing it today. But our rivers and lakes are already running dry, and so it's a huge challenge. But the only way we will ever be able to do it is to have science and technology help us to solve these problems. We need to get to 2050 without screwing up the planet and sustainably feed those 9 billion people.

Tom:              As food shoppers, consumers, have we become disconnected from the origins of what we're eating and feeding our families?

Jack:               Absolutely, and it's inevitable. If you go back 200 years, pretty much everybody was a farmer or engaged in farming or knew a farmer, and today, it's 1% of the population is involved in farming, and most of us, it's a very distant activity. It's not really surprising that people are less aware of what goes into our food system today.

Disrupting the discussion about food

Tom:              We're in an era of disruption. In fact, the theme of the conference is "Disrupting the Disruptors." What are the consequences of not being able to roll with those changes?

Jack:               I have a lot of confidence in the science and technology that we will in fact be able to address these challenges, if given the opportunity to do so.

What I was really talking about is disrupting how we communicate about food and agriculture, and that's really the challenge that we all have: figuring out how do we bridge the divide between those who think we should produce food the way we did a hundred years ago and those that think we need to produce food more intensively, because they all have something to contribute to this conversation.

Tom:              What about the emerging technologies that are bringing data to the platform and data that could be accessible, even all the way down the food chain to the consumer?

Imagine if you're an organic farmer today. For the last 50 years, you’ve probably been planting something called cover crops, which you plant in between growing seasons to maintain the soil and add maybe some more nutrients back into the soil. You've been doing it because you believed in your heart it was the right thing to do. Well, today, big data allows us to tell what's the return on my investment of planting a cover crop? And for the first time, a lot of big conventional farmers are planting cover crops because big data told them, yes, in fact, you get a return on your investment. That's just an example of how organic practices become mainstream practices as a result of this data.

Jack:               Well, it's certainly not very high. And that's really unfortunate. Because the only way we're going to save the planet is if the food companies are part of the solution. And there's no way we can do it without them. And if we make them the bad guy, if we make them the villain in the story, why are they going to work with us to try to solve these problems? Why are they going to care what the consumers think if the consumer just thinks that they're out to somehow undermine them?

The reality is that we need to gain the trust. It's not the consumers' fault. As a food company, you need to be trustworthy in order for people to trust you. That's something that is earned. It's not something that's given.

Tom:              What have you observed the industry doing that, if you were given the opportunity to change it and to improve it so that it became more credible, “it” being the industry, you would make that change?

Jack:               Well, I mean one of the things I worry about is food fads. There's always a new fad coming along — a new superfood or a new diet or other things. And food companies tend to just jump in, and that's because the marketing guys are saying, "Hey, everybody wants gluten-free. We need to produce a gluten-free product." Even if the company itself doesn't believe that product is going to benefit the consumer.

So you can actually find gluten-free water now, and you can find non-GMO water. Well, as far as I know, there's never ever been any water that's had gluten in it or was GMO. They're really selling a concept to the consumer, and consumers no longer understand. What is gluten? Most people don't even know. Unless you have celiac disease, you probably don't need to be avoiding gluten at all. And yet, when people go to the grocery store and they choose between two products, one is gluten-free and the other isn't, they think that contributes to their health. And the company knows it does not contribute to their health, and yet, they're willing to take that premium.

I really think that when consumers have a false belief, it's more often in the interest of industry to cater to the belief than to try to eradicate it. And that's really short-term thinking. The companies that are going to be around a hundred years from now are those who are in it with the consumer, not out to get the consumer.

Tom:              What, in your estimation, is the best, most effective way to deliver important, complex information to the public?

Tom:              Here's a question for the times. It kind of has little to do with what we've talked about so far, but you're a communicator and I'd like to get your opinion on how we go about, in these times, engaging people who have different opinions about things.

It doesn't really matter where you are on the political spectrum or on the food spectrum, you probably worry about the negative impacts of agriculture, you care about the future of our planet, you want people to be healthier and better fed, and so there are a lot of things that we have in common. The question is how we get there. The only way that we're going to figure it out is by talking to each other, not talking at each other. Ultimately, what will determine whether or not agriculture can save the planet is, do we have a conversation that allows us to make those choices?

Tom:              Back to the food industry, are there any particular trends that you have your eyes on these days?

Jack:               Well, one of the exciting ones that my company is involved in relates to something called the Arctic Apple. It's a non-browning, genetically engineered apple. I'm hoping that it will actually change the nature of the conversation around GMOs. Because what we haven't had up until now is a product that people choose because it's a GMO. Once you choose a product because it's a GMO, you're not really going to think very much about soybeans and corn and other things like that. And people often say, "It's just an apple," but the apple is the third most wasted food item in the United States.

Jack:               Well, we don't really have a choice. When apples are bruised, they're not going to fit the quality demands to go to the store. I've talked to some people and they'll say, "I still eat bruised apples." And that's fine, but do you buy bruised apples? You're not intentionally going out there and looking for them. And so it just undermines the quality, and at the end of the day, the apples that have slight bruising are going to get tossed.

Jack:               Well, I'm passionate about trying to figure out how are we going to solve this huge problem that we all face, and do it in a way that actually makes everybody better. I'm hopeful that we have some of the tools. Now we just have to find the right dialogue that allows us to get there.

Tom:              Jack Bobo, senior vice president and chief communications officer for Intrexon. We thank you for joining us, Jack.

Jack Bobo presented at ONE: The Alltech Ideas Conference (ONE17). To hear talks from the conference, sign up for the Alltech Idea Lab. For free access, click on the button below.