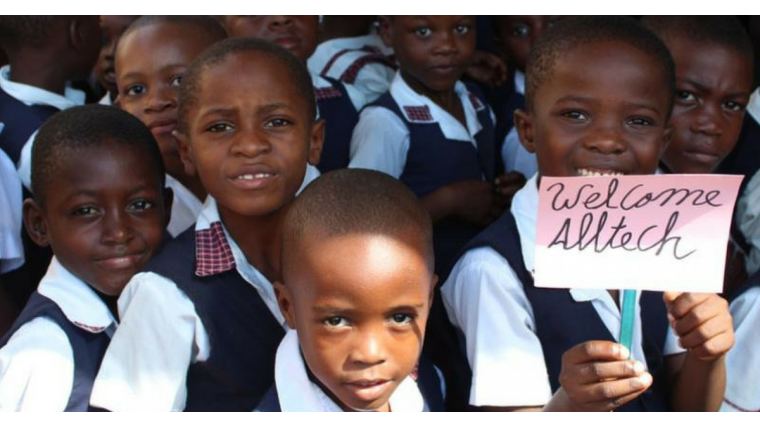 Haitian children welcome visitors to their school, which is funded through the Alltech Sustainable Haiti Program.

The following is an edited transcript of Tom Martin's interview with Dr. Jorge Arias, global director of aquaculture and country manager for Chile and Argentina at Alltech, and Avelyne Saint Hilaire, the local administrator of the Alltech Sustainable Haiti Project in Ouanaminthe, Haiti.

What's happening in Haiti? Alltech is there, having arrived in the aftermath of the devastating earthquake of 2010 to a nation in need of much more than immediate disaster relief. There was, and remains, a need for sustainable economic growth, jobs, agriculture and education. Joining Tom Martin for an update on the Alltech Sustainable Haiti Project are Dr. Jorge Arias, global director of aquaculture and country manager for Chile and Argentina at Alltech, and Avelyne Saint Hilaire, the project’s local administrator in Ouanaminthe, Haiti. Dr. Arias served as Ms. Saint Hilaire’s translator for this interview.

Jorge:                          We went to Haiti about 10 days after the earthquake. That was in January 2010. We went with Dr. Lyons (Dr. Pearse Lyons, president and founder of Alltech) and a couple of friends. We went directly to the Dominican Republic and then by helicopter to Port-au-Prince. We wanted to check on the situation there and to see what we could do.

Port-au-Prince was the main area suffering from this earthquake, but actually, the whole country is in a continuous crisis situation. Dr. Lyons said, “What if we try to help Haiti through another region?” Through contacts and friends, we connected with people in the north of the island — in the Ouanaminthe area. People were arriving in Ouanaminthe from the critical area of Port-au-Prince. We found a school there, and that’s the beginning of the story.

Tom:                           This struck a country that already had long been suffering from entrenched problems of all sorts. Could you carry on that description? How would you describe what you found?

Tom:                           Alltech’s involvement in Haiti extends beyond coffee production to educating and inspiring the next generation of Haiti. Tell us how the coffee connects to children.

Jorge:                          The first thing we started with was sponsoring a school. There was an elementary school in Ouanaminthe, and in one of our visits with Dr. Lyons, we knew there was another school (also in need of help). So, we took Dr. Lyons to see this second school. He immediately said, “Oh, we need to do something about this school also, Jorge.” That was the beginning of subsidizing and helping the other community. The students receive special education. We keep sending volunteers to teach the kids music, language, art and many activities.

We also prepare lunch for the whole community of students. And we have some parents coming every noon to enjoy good food in both schools.

We have more students now, to the point that we are planning to move to a new school in Ouanaminthe. We need to grow because we ran out of space where we are.

Avelyne:                      This is an experience where I’m growing every day because Alltech gave me the opportunity, not only to work with the community, but also the possibility to help the needy people in my area. The kids and the parents are enjoying and learning. They are evolving.

Avelyne:                      In the last seven years, the parents have received significant help. We started with 150 students in Ouanaminthe. In Dondon, we had fewer than 100 kids. Right now, between the two schools, we have 652 students. There are around 500 families that receive help and this education. That’s not only helping the students at the school, but also beyond school. And the kids are receiving quality education.

Jorge:                          The First Presbyterian Church in Lexington is associating with the effort that we started in 2010. They started buying the coffee first. That was the first activity. They did it for more reasons than to simply transfer the profits back to Alltech in order for us to sustain the project. They decided to use that money to go to Haiti and do some work with us. So, they have taken two or three trips to Haiti in these last few years, and one of those projects was to set up a water purification system for the whole community.

We bought a piece of land where we are setting up this purification system. We can sell the water at a reasonable price and that, in turn, will also subsidize the growth of the project and help us to build a new school.

Jorge:                          Water quality is an issue in Haiti — in the whole region. We can decrease the influence of different diseases and we can guarantee the quality of the water we use for our kids, but also for the community. We don't know how far we can get with the (water) project. We know from experience that in Dondon it became the water well of the whole community. It’s interesting to see all the community getting involved. Sometimes what the community needs is for somebody to kick off a project and people will follow.

Jorge:                          Yes. On one of my trips, I met a group of doctors visiting the Ouanaminthe area, and I had been told that they were coming from Lexington. I met them and we became very good friends, and remain so today. They’re going to Haiti every year to work on another project with Southland Christian Church. We basically formed a “joint effort” with these guys. They’re still going every year, and they are visiting our kids at the school. One of the doctors created a foundation to sponsor kids coming from Haiti to study at the University of Kentucky.

We are trying to educate those guys and send them back to Haiti to work in their communities. We have one good example in James Blanq. He’s actually producing chickens now in Ouanaminthe, and he came through this program.

Tom:                           Another part of this project has been the important recognition of the healing and enriching power of the arts. What sort of connections have been made, and how have they developed?

Jorge:                          Dr. Everett McCorvey (University of Kentucky professor of voice and director and executive producer for UK Opera Theater) helped us, not only through the UK School of Music, but Everett is also a member of the community of First Presbyterian Church. We’re taking their volunteers to teach our kids music. We also invited a person that was giving a lesson in painting.

Every time that somebody approaches Alltech and our group of people working on the project and they say, “I know how to do this, I know how to do that,” they are more than welcome to come along and join us in the effort.

Tom:                           I have one question for each of you: I’ll start with you, Avelyne, and ask what positive changes have you seen occurring as a result of the efforts of the Alltech Sustainable Haiti Project?

Avelyne:                      Now the parents are much more involved in the education of their kids, and they're more conscious about the importance of education. As an example, Mondays and Fridays are marketing (shopping) days in Ouanaminthe. There is marketing on the border between the city of Dajabon in the Dominican Republic and the city of Ouanaminthe in Haiti. In the past, parents directly involved in the trading process were taking their kids. So, on Mondays and Fridays, the school was empty. The big change now is that the kids are going to school from Monday to Friday and their parents are doing their thing in the market.

I have noticed that the government is aware of the project and is approaching the school to look at what we are doing, and they are getting more involved in all this process. That didn’t happen before.

So, we’ve been doing that through Dr. Lyons. We are taking different people to visit the project. Those people are getting more involved in the project some way or another. I took part of my family on my last trip. I took my son and he wants to go back.