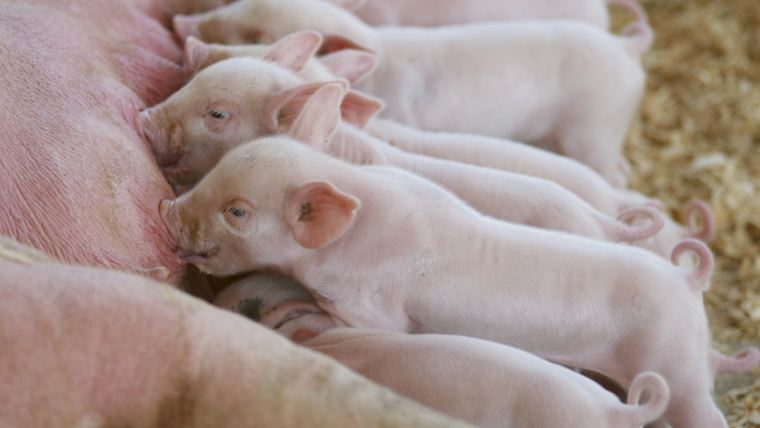 U.S.-based startup SwineTech is using artificial intelligence and sensors to mitigate the problem of piglet mortality due to crushing.

Among the challenges faced by the swine industry, this one may not be on the radar. In reality, deaths due to sows crushing their young costs producers billions of dollars a year. SwineTech, a U.S. based startup, is solving the problem using artificial intelligence and sensors to prevent piglet deaths. Can the next generation of ag-tech increase efficiency and improve profitability on the pig farm?

The following is an edited transcript of Tom Martin's interview with Matthew Rooda, co-founder and CEO of SwineTech. Click below to hear the full audio.

Tom:              I'm talking with Matthew Rooda, co-founder and CEO of SwineTech, one of the Pearse Lyons Accelerators presenting at ONE19. Rooda graduated from the University of Iowa with a degree in enterprise leadership and went through the pre-medicine track. In 2015, he founded SwineTech, Inc., to solve the global issue of piglet deaths on farms. Thanks for joining us, Matthew.

Tom:              I understand that you grew up in the pork production business. Tell us briefly about that background.

Tom:              How has that experience resulted in the development of the company that you now head, SwineTech?

Matthew:        It's had a lot to do with it. When we look at what is a farmer — a farmer is a little bit of everything. He's a contractor. He's a plumber. He's an electrician. He's a caretaker. It's a little bit of everything, and you really come up with anything you can to solve a problem. They're problem-solvers. Growing up, I had always been encouraged to solve problems in creative ways. Ultimately, in my experience as a farrowing manager on the South Farm in Northern Iowa, I ran into the problem of piglets being crushed. Ultimately, there was nothing at our disposal to solve this problem, so I started brainstorming with my co-workers and with other individuals — veterinarians, production managers — and, ultimately, came up with a solution that could save a lot of piglets' lives.

Matthew:        SwineTech is an animal health company really focused on reducing piglet mortalities while also driving more efficient and effective management processes to make things better on the farm on a production level. We are located in Cedar Rapids, Iowa. We were founded in 2015 by me, Abraham Espinoza and John Rourke, and, together, we have driven the company to right around 18 employees — and a revenue-driving business.

Matthew:        This problem is huge. When we look at what it is over the entire world, we're talking over 116 million piglets that die from this problem, of all piglets born. It's resulting in the waste of more than 34 billion pounds of pork and, because of that, really, it's costing the producers and many stakeholders billions of dollars every year.

Matthew:        Our technology leverages advanced acoustic engineering, some machine learning and various sets of sensors to identify when a piglet is getting laid on by using a microphone that sits in the pen and listens to those wavelengths of frequencies of the piglet's squeals. When we look at a piglet's squeal, it's very consistent, very rhythmic, when they're getting laid on; it's pretty much a cry for help — breath, squeal, breath, squeal, “Help, help, help!” What we can do is we can identify that and then pinpoint exactly what pen that's in and then alert the correct mom to stand up and save that pig's life. How we alert her to stand up is with a chiropractic vibration and impulse.

Tom:              Wow, so you're using artificial intelligence and sensors. Tell us a little bit about that technology.

Matthew:        Yes, it's amazing what we're able to do today with technology. What we're doing right now could never have been done in years prior. What you really can do is you can tailor your technology to each individual environment by allowing it to train itself and to learn. What that allows us to do is it allows us to provide a custom application for each producer and for each genetic line of pigs. It's just a great opportunity for us.

Tom:              What kinds of management tools do you offer, and how do they increase profitability?

Matthew:        The management tools we offer today are around the temperature in each of the pens. Right now, the temperature that we see on a reporting basis is the room temperature, when, really, there are drafts to the room, so we should be understanding that on a more in-depth level. We report on how active the mother pig is — so, how often is she standing up and sitting down. This can allow us to understand maybe what sows are sick, what sows are eating enough, what sows may have some complications, and then, we also report when sows are a crushing risk to their piglets.

As we move forward, what we continue to find is that, by displaying this information, we can correct certain management practices. We can reduce labor because, if we know that all these sows are getting up multiple times a day, we don't necessarily need to staff somebody to walk around the whole farm to get pigs up three times a day. So, there are ways that we can really make things a lot more efficient, and as we keep moving forward, we're looking at things like birthing, nursing, eating, drinking behaviors, piglet growth rates and, then, helping identify piglets that are falling behind and need more special attention.

Matthew:        We do; that's a huge core of our business. We constantly are working with some of the world's leading producers to continually research and identify future opportunities and to develop those technologies that can help support that. Our engineering team is phenomenal, having worked at NASA, the Pentagon, Boeing, Royal Air Force. What that means is that they're able to do some really cool stuff, and our relationships with producers and our engineers has allowed that to really gel and drive great innovation.

Matthew:        Identifications on what's new around African swine fever (ASF), what other companies in the technology space and agriculture are doing, and things along those lines.

Tom:              Let's talk about African swine fever — a huge, huge problem. I understand that it has now turned up in Asia, and there's even a global conference that's happened for years, and it's been called off this year as a result of ASF. Tell us more about this.

Matthew:        Yeah, African swine fever is a double DNA-stranded virus that can really, once infected, cause the pig to die within a week and is very contagious. We've seen a great portion of China's swine population die due to this issue. As we look at where it's spreading and how it's spreading, there's a big national alert on the biosecurity and the transfer of pork from country to country. It's a really big problem that everybody is aware of. It's very great, I guess, of the National Pork Board to hold off the world conference. I think that was a good idea; it's not worth the risk at this time. Everybody, right now, is just taking precautions at a biosecurity stage to make sure that we're at least preventing as much as we can, I guess, the infection of African swine fever.

Matthew:        It hasn't yet. There's just a lot of concern around airports and how it might come through there. I know the government is taking extreme precautions, which I know all the pork producers are very thankful for.

Matthew:        It's actually creating a lot of opportunity, when we look at the issue. When we look at what's going on, with China supplying over 50% of the world's pork, when they lose a quarter of all of their pork and growing, there's a huge need for more supply. So, you see a lot of countries — more specifically, Chile and Russia — who are able to take advantage of this and help export more to China, and it's, overall, driving up the price of pork considerably. It's a good time, right now, in the U.S. and around the world — if you're not in Southeast Asia and some places in Europe — to be in the pork industry, because there's a lot of profits to be made right now.

Tom:              A moment ago, we talked about research and development. Are you working on any new innovations?

Matthew:        We are. We're working on how we can evolve our technology to further help support farrowing staff and farm managers. Ultimately, we want to be the source of information for everything going on in the farrowing pen. We want to automate the whole process — so, how can we display information that is valuable to them to help them save time but, ultimately, to leave no piglet behind? As we look at this technology and where we're going, there's a lot of thought processes and time that's going into ensuring that that information we're collecting is also valuable to animal health, swine genetics and nutrition companies like Alltech.

I want to learn more about improving efficiency and farm management on my pig farm.