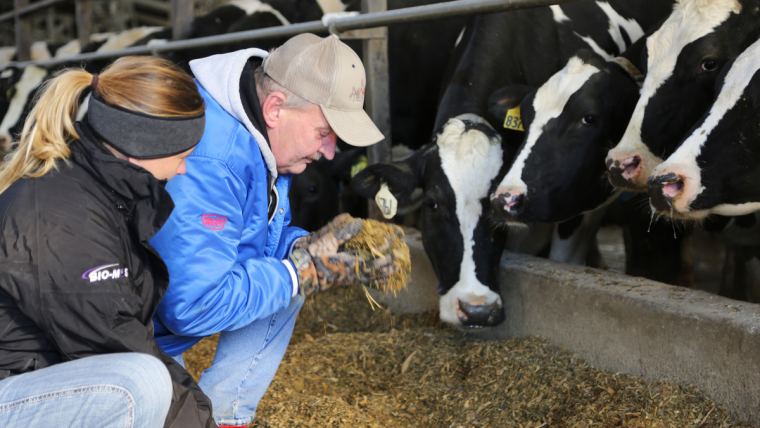 The following is an edited transcript of Kara Keeton's interview with Jorge Delgado. Click below to hear the full interview.

Kara:              I'm here today with Jorge Delgado, one of Alltech's elite dairy advisors. Jorge, tell me what that title means.

Jorge:             The elite advisors are all the on-farm advisors for dairy. We have a group that is called the On-Farm Team and, under that team, we have several consultants with different roles. Some specialize in forage management; some specialize in analytical housing. My role is specializing in assisting dairy producers with managing labor — so, human resources.

Kara:              Well, labor is one of the most important aspects of any dairy, as we all know. How is the labor force on today's dairy changing?

Jorge:             I think the supply is changing. There are less and less people looking for jobs, first, in agriculture, and second, the supply is just short. Before — if we go back 10 years or 50 years, back in time — there was a lot of supply coming from mainly Mexico and Central America. That supply is short now based mainly in immigration rules, and second, these people are filling spaces that people here in America are not doing, especially related to labor — so, hands-on jobs. Those jobs are being filled with labor from Latin America, so agriculture is competing with the rules put in place now with immigration and, also, with all the other companies where people are not able to do jobs by hand. Those are the two main things.

Jorge:             Yes. It's really hard, so that's the first thing that we have to take for this conversation. If you ask individuals in America what they want to do for the future, nobody is going to answer that they want to milk a cow. Even if you ask people that are coming to America to look for a job, they don't want to do that either. We all have dreams, and they only want to do a better job, find a better job, find a better place where they're close to community, where they're close to the cities. Nobody likes, or very few want, to work in agriculture — not only in dairy, but agriculture as well. That's why it's very hard to keep people and retain people working in agriculture.

Kara:              Now, this is not a new challenge though for the dairy industry. Labor has always been a challenge. As you were talking about immigration and so forth, that is really probably one of the bigger changes than previous generations. Is that correct?

Jorge:             It is. It is one of the biggest changes. It's always been there. Of course, we want to live in a country that is peaceful and safe and there's plenty for everybody, and we have to protect our borders. That is for sure. Generation through generation, every president worked around rules and regulations about immigration. There have been more ideas generated by this actual government, but those things are not new; they are the same. There are more and more people actually coming from Central America and Mexico, to come here and look for jobs, because the situation in those countries are becoming very hard to live with for those kinds of people. Again, the problem here becomes how we can attract people to work in agriculture, and how can we keep the people in agriculture working for the dairy industry and all the other industries.

Kara:              As you mentioned, retaining those good workers is difficult. As we find the talent we need, what are you seeing as the key to helping retain those individuals on the farm and in our dairy industry?

Jorge:             I think what we've seen today here in ONE (The Alltech Ideas Conference [ONE19]), I think, is a very good example of what are the things that you can do. What I mean by that is that you have to create a culture. You have to create a culture where employees feel that there are values, there's respect. Unfortunately, in the dairy industry, before, when there were plenty of workers, they were not thinking about creating a structure or creating an organization or creating a culture to retain people. Now that those times have changed and they're more difficult, the dairy industry needs to start thinking outside of the box and changing ideas and thinking of ideas or ways to be capable of keeping these people working for dairies.

Kara:              In your role with the Alltech Dairy On-Farm Support program, you're helping farmers to embrace this change and look at the solutions to help retain these people. Can you give me an example of a farm you've worked with or experience you've had in this role to express how farmers are embracing this change?

What they need to do is to create structures in the organizations about people. That's how we're going to help these guys, or where we're helping these guys. An example of what we do and how we do it is that we want to go to the farm, and we want to create a culture, build a culture based on surveys that we do on the dairies. What we do is we take a survey that is a very simple question, 17 questions, about the culture: how do they feel, if they know who the supervisor is, if they know the culture on the dairy, the team in the dairy, how they get along with the team. We gather all this information and we put a report together for the dairy farmers, so, with this information, we hit the strongest points and the weak points.

With the strong points, we're doing a good job already, but what we do is we work based on the information on the weakest points. In those weakest points, what we do is we try to build a structure of employee handbooks, job descriptions, create a culture, create anniversaries, create important dates on the dairy, so, then, people will want to stay working for these guys.

Kara:              So, you're not just doing an operational analysis; you're actually doing a hands-on project with the farm so that they can actually put these new implementations into place in their operation.

Jorge:             Correct. The information that we gather from these surveys is very valuable. They can create new conversations. They can create more feedback. They can improve based on that information, and that's where we help. Usually, what a dairy farmer is looking for is a short training for employees, but we want to offer more than that and go beyond that. We want to create a structure, organize what they want to do about their culture, and then, from that, create all the tools just to keep these guys on the farm, employees on the farm, and for the dairy farm to be successful.

Kara:              If a dairy manager wants to connect with you to learn more about Alltech's On-Farm Support program, what's the best way for them to do that?

Kara:              What advice would you give a dairy farmer that's struggling with the idea of moving in this direction and enhancing their worker relationship, their operations, on the farm? Is it worth it to their bottom line?

Jorge:             If you think about what happens on a dairy on a daily basis, everything is done by hand. There are a few dairies now that are moving to the robotic side of things, especially with milking cows, but if you think about delivering a calf, feeding a calf, taking care of that cow that just had a baby, feeding those cows, making sure that they're healthy, milking those cows — all those things that happen in a dairy, they are related to people.

Click here to learn more about how the Alltech On-Farm Dairy Support team can support your dairy farm needs.