The 20-somethings were from all over the world: the U.S., England, Ireland, Turkey, Brazil, Kazakhstan and Peru. And if they had one thing in common, it was their view of the supermarket.

“Do you think grocery stores are important?” they were asked by Alltech Chief Innovation Officer Aidan Connolly.

Leading Alltech’s Corporate Career Development Program, Connolly was hearing in this next generation of consumers a receptiveness for the sweeping, fundamental changes in the production, distribution, purchase and consumption of food heralded by the $13.4 billion Amazon acquisition of Whole Foods.

“When we buy our groceries, we mostly buy online,” one student told him.

The huge e-commerce company had already been dipping its toe in the food delivery market when it turned its eye toward Whole Foods.  AmazonFresh, a subsidiary of Amazon.com, is a grocery delivery service currently available in some U.S. states, London, Tokyo and Berlin.

The announced intentions of this mega consumer product distributor to take a step further into the brick-and-mortar premium grocery business has made waves all along the food chain, from retail to agriculture.

“I think it's an extraordinary moment,” said Mary Shelman, former director of Harvard Business School's Agribusiness Program. “This could truly be a disruption rather than a change."

“Disruption means you do something in a completely different way rather than just making some incremental changes to it,” Shelman continued. “Amazon, which had historically envisioned a world without brick-and-mortar stores, is now, in one fell swoop, making a significant run into that brick-and-mortar world.”

The deal, providing Amazon access to Whole Foods’ 466 stores in the United States and the United Kingdom, hasn’t yet closed, and there is plenty of speculation that competitive bids could materialize. But Amazon has its reasons to pursue the acquisition with determination.

“Food is the least penetrated category from the online shopping standpoint,” explained Shelman. “Amazon clearly wants to bring that into the fold. I think the realization is that it takes some different skills and infrastructure in food than perhaps they are set up to deal with, so this gives them a tremendous opportunity to learn from that, and to run with that.”

As Shelman sees it, “For Amazon, the biggest challenge in delivering fresh products to your home is what everybody always says: ‘Oh, I don't trust them. I want to go pick out my fruits and veggies and my meats myself.’ Whole Foods brings in that brand name that has value, so it’s: ‘I trust Whole Foods, so now I trust Amazon bringing me Whole Foods quality. Do I trust Whole Foods to deliver for me? I don't think they're very efficient. But Amazon delivering Whole Foods is like, wow!’ So both sides win from the opposite brand name.”

What might this mean at some key points along the food supply chain?

Producers and growers in an Amazon/Whole Foods world

The biggest obstacle for producers trying to access markets through the food retail industry today is the enormous power held by the supermarket and big box chains as gatekeepers to the consumer.

Control of in-store product positioning provides an enormous source of revenue for traditional supermarkets. So-called “slotting fees” must be paid to win premium space in order for a product to appear on the shelves of Krogers, Safeways and other major chain stores.

“Only big companies can afford to do that,” said Shelman. “Even if you are a small company and can find the money to pay a slotting fee to get on the shelf, the ongoing costs of the promotion and support that it takes to actually get your sales up to a level that is acceptable to that retailer is a staggering number — something like $100 million, $10 million to introduce a new brand today.”

A major casualty of this, she notes, is creativity.

“We see that in the big packet food industries: They just bring out yet another flavor, another line, another variation in that brand, and they keep blocking up that shelf,” she explained. “You really don't get any true innovation there.”

Shelman believes the evolution of the “Amazon marketplace” is providing new opportunities for smaller producers to bypass those costs and directly reach the consumer.

But Connolly believes “Big Ag” and smaller farmers alike have some concern.

“It's part of seismic changes taking place in the food chain,” he said. “The top 10 food companies have seen a decline in their sales, profits and share prices as consumers reject traditional famous food brands built around processed foods.”

Every day these shifts are reflected in the news: Nestlé being a $3.5 billion target by an activist investor; Kraft’s attempted takeover of Unilever; Amazon gobbling up Whole Foods; and Wal-Mart’s purchase of Jet.com

So, if traditional “Big Food” players are in trouble, how should agribusiness respond?

“It must adapt to the new reality,” says Connolly, listing the top three strategies food businesses must take to thrive in the changing landscape:

Connolly notes that “this is a new era with the food business re-fragmenting, and smaller brands will be faster to build and sell direct. Consumer sales over the internet offer an opportunity for ‘Big Ag’ that was not available 20 years ago.”

In this new coupling, who will take the lead? Shelman expects that Amazon will pull Whole Foods toward its brand promise and mass appeal: convenience and reasonably priced items across quality levels.

“I don't believe Amazon will broadly adopt the same positioning and values as Whole Foods across their broader food portfolio,” she said. “I can't imagine them not selling Cheerios or Kraft Mac & Cheese online. They may initially adopt a higher quality approach in fresh products — meats and produce, since those seem to require a stronger brand to sell.”

Consumers in an Amazon/Whole Foods world 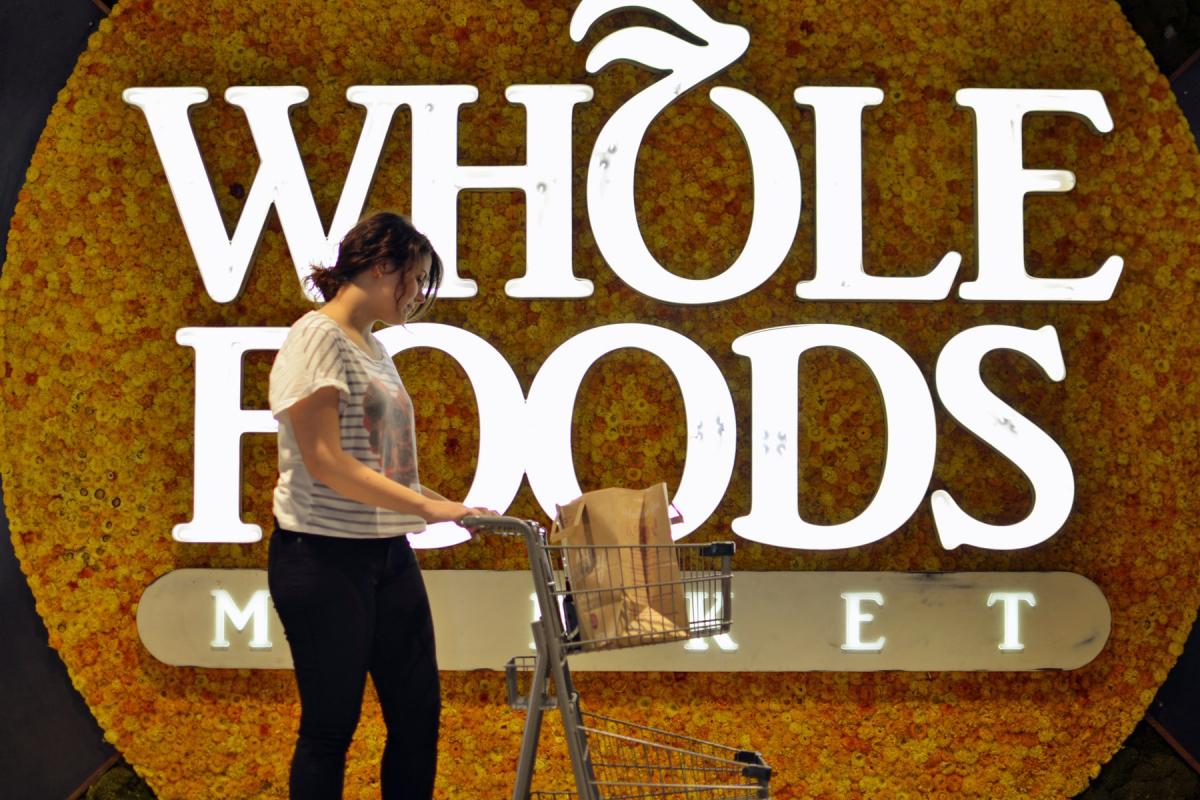 Today’s consumer is swimming in a sea of options and information. The innovation of the “food kit” has given rise to the home-delivered packages offered by Blue Apron, HelloFresh, Plated, Purple Carrot and Home Chef. Nestlé has invested in the prepared meal delivery service Freshly, and Sun Basket has attracted Unilever capital.

It takes time to complete a merger with all the complexities brought to the table by Amazon and Whole Foods. So what's going to happen to the rest of the food industry while t’s are crossed and i’s are dotted? Views differ about the extent to which the merger will cause change.

Speaking to analysts and investors at a conference in Boston, Kroger CFO Mike Schlotman said he doesn’t envision a major shift to people ordering groceries online for delivery to their homes.

“Part of me refuses to believe that everybody is just going to sit at home and everything is going to be brought to their doorstep and nobody is ever going to leave home to do anything again,” said Schlotman.

But, according to Connolly, “the United States has been slower to the party than other parts of the world,” and there is plenty of evidence that significant change is already well underway.

“Maybe there are some of us that take joy in walking up and down the grocery aisle and doing that as our chore, but what consumers are saying is that they're voting with their feet,” Connolly said. “They're saying, ‘If you give me a better alternative, I won’t go to the store.’"

Connolly recalls the observations of a friend who is involved in the food industry in the U.K., working with Marks & Spencer, Sainsbury’s and Tesco, who forecasts that we're in the last five to eight years of the big box model of the supermarket.

“What we're going to see in the future, according to him, is much more of a Starbucks version of a grocery store,where you can buy the small produce, organic, the pieces that you want to have hands on, but for the most part, you're going to pick it on your cell phone, ordering it directly, and it will arrive today by delivery in a half-an-hour increment,” he explained. “So if you say 4:00 p.m., it'll be between 4:00 p.m. and 4:30 p.m. In the future, that will be delivered by robots, which is already happening in England, and eventually it'll happen by drone.”

One of the world’s largest pork producers, Smithfield Shuanghui of China, has a strategic cooperation agreement to sell packaged Smithfield meats through JD.com, a Chinese version of Amazon.

“They’re creating a cold chain system from the warehouse to the customer, selling fresh chilled foods, including packaged meats,” says Michael Woolsey, senior strategic manager for Alltech China. “If a customer in the morning decides they want to have hotdogs from Smithfield for dinner that night, they take out their cell phone, dial up JD.com, order the hotdogs and the truck shows up later that afternoon. Chilled distribution the entire way to the consumer’s door. So, it’s a superior product. It’s what consumers want. It’s an exciting development.”

Shelman says today’s marketplace “is just fundamentally different” as consumers are being conditioned to a whole different set of solutions.

“I think for everybody now, the fun of thinking about these different scenarios and letting go of the old retail model is leading us all to be very challenged to think about what that future is going to be like,” she said. “How are we going to get our food 10 years from now?”

“If we think of machine vision, where you use a camera with artificial intelligence, you can teach your camera to recognize what you want in your meat, what you want in your produce,” he said. “It can learn to smell the produce. It can learn to recognize the color that you want. It can probably even, using these internet of things-type devices, give you all of the origins of and the pesticides used in the products, all of the things that might cause allergies.

“So, your drone, equipped with the right camera and the right artificial intelligence, can do these things,” continued Connolly. “And we are not talking about something that is going to happen in the next 30 years. This can happen within the next 12 months.”

And 20-somethings from Brazil to Kazakhstan can hardly wait.