4 steps to help you celebrate what's right in the world 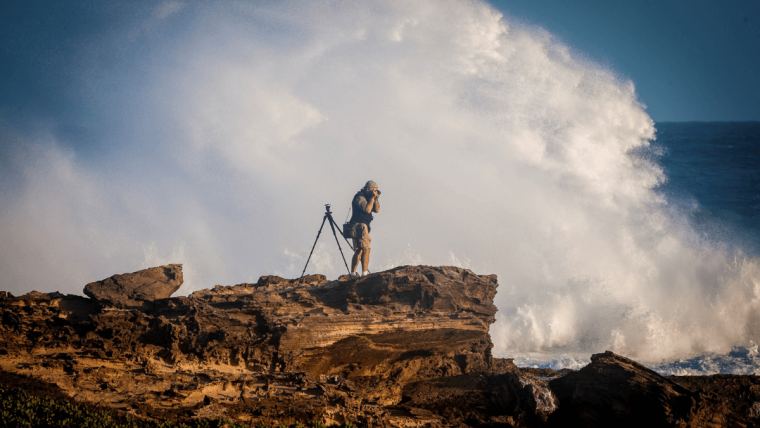 Photojournalist, filmmaker and former National Geographic photographer Dewitt Jones delivered a keynote address on celebrating the good in the world at the 2021 Alltech ONE Ideas Conference.

When he was 26 years old, Dewitt Jones walked into the headquarters of the famed National Geographic magazine as its newest photographer in what, amazingly, was his first professional photography job.

“I remember standing there in the lobby … surrounded by the most beautiful photographs I'd ever seen in my life,” recalled Jones in his keynote address at the 2021 Alltech ONE Ideas Conference. “How was I ever going to prove myself, (prove) that I was worthy of working there?”

Despite his fears, Jones did more than prove himself; his eye for detail and stunning images have made him one of the premier photojournalists in the world. He worked as a freelance photographer for National Geographic for 20 years, and his photography has also been featured in global advertising campaigns for such powerhouse clients as Canon and United Airlines.

And his talents don’t stop at still photography: As a filmmaker, Jones had garnered two nominations for Best Documentary at the Academy Awards before he turned 30 years old.

So, how did Jones overcome his fears and establish such an incredible portfolio of work? As he explained in his presentation, he believes that the key to success is following four steps that reveal the extraordinary in the ordinary and provide a fresh perspective on life:

“When I applied these four techniques, I made some incredible images,” Jones said. “I locked in those images by always beginning by celebrating what was best … and letting the rest fall away.”

“Vision without technique is blind,” Jones said. “It's fine to have a brilliant idea, but if you don't have the technique … to manifest it, you have nothing.”

As a photographer, for Jones, honing his technique meant taking thousands of photos in the quest to get the handful of images that would resonate most with readers.

“When I worked for (National) Geographic, the average article was shot in 400 rolls of film. That's over 14,000 images to get the 30 that go on an article,” Jones explained. “(But) I don't care how many shots it takes. We all know when those right answers come into focus … but you're not going to get (them) unless you're willing to press out on the edge of your own comfortable envelope to take the risk.

“It is not trespassing to go beyond your own boundaries,” he added.

Jones also emphasized the importance of focusing on perfecting your own technique, not on trying to be better than others or doing what everyone else is doing — a lesson he learned from Bob Gilka, who was the head of photography at National Geographic when Jones was hired.

“He said, ‘You know, Dewitt, the people who photograph for (this magazine) are the best in the world. And you're one of them now,’” Jones remembered. “‘You don't have to prove yourself … but by God, every day, you had better improve yourself. I want you to spend every day trying to be better than you were yesterday.’

“He changed the way I did everything from that day forward,” Jones said.

By focusing on improving our own techniques and strengths instead of worrying about how we measure up to others, Jones argued, we can free ourselves from our hang-ups.

“When we really are doing that improving, not proving, believing that there's more than one right answer (and) reframing obstacles into opportunities, that's when we'll begin to lose all our fear of mistakes or setbacks,” he said.

2. Put yourself in the place of most potential

No matter what your career or passion, Jones said, your chances of achieving great success are slim if you don’t put yourself in a place of great potential. For Jones, that meant literally traveling to locations with the most potential for finding the perfect shot.

“If nature is going to open up multiple windows of opportunity, where do I have the best chance of finding them?” Jones would ask himself. “There are 1,000 ways to come at any challenge to find that extraordinary view.”

Jones recalled one particular photo assignment where things weren’t going exactly as he’d hoped — but by being open to the location’s great potential, as well as to advice from someone who knew the place well, Jones was able to get even better pictures than he’d anticipated.

While on location in Scotland to shoot a campaign for Dewar’s Scotch, the weather wasn’t what Jones had planned for — but a local fisherman advised him that if he came back the next day, he might see something extraordinary, albeit unexpected.

“He said, ‘You know, laddie, there was mist on the water this morning. That's unusual for this time of year.’ And I climbed all over it,” Jones recalled. “I want to be in the place of most potential. So, I'm out there two hours before dawn, and when the light starts coming up, I got the boats, and I got the fishermen. … I got my first right answer, (and) they just kept coming.”

3. Be open to possibilities

Even if you do put yourself in the place of most potential, Jones argued, it won’t make a difference if you aren’t open to the possibilities and what the world has to offer.

“When the great photographer Minor White would go out to photograph, he would never say, ‘What will I take today?’” Jones recalled. “Rather, he would ask, ‘What will I be given today?’ And I would add: Will I be open enough to see it?”

For photographers, the possibilities are endless — but over the course of his career, Jones noticed that many people mistakenly believe that there’s only so much beauty to go around.

“Mother Nature never stood in front of a forest and said, ‘There is one great photograph hidden here. One photographer will find it, and the rest of you will be hopeless losers,’” Jones said. “No, nature says, ‘How many rolls you got, Dewitt? Bring it on! … I'll fill it up with beauty and possibility beyond your wildest imaginings, right down to my tiniest seed.’”

Along with being open to all of the possibilities, Jones argued that being willing to look for the next right answer instead of believing that there’s only one right answer is not only transformational — it is “the key to creativity.”

“So many things begin to change when you come at the world from that perspective,” Jones explained. “As you press on, looking for that next right answer, … you do so not in terror but comfortably knowing it's going to be there for you. And you really do begin to embrace change rather than fear it. You really do hit the day with a sense of possibility, not paralysis. And you just get more and more comfortable with reframing an obstacle into an opportunity.”

Jones saved his most important step for last, positing that how you see the world — and what you choose to focus on — will affect everything else in your life.

Jones began cultivating a vision of positivity when he was hired by National Geographic, who always encouraged him to focus his camera lens on the good instead of the bad.

Jones acknowledged that it’s not always easy to find — or even look for — the positive, especially in the midst of overwhelming struggles, like the COVID-19 pandemic. But he still encourages everyone to try.

“I'm not going to deny that there's very real pain and suffering in the world,” Jones said. “But if I'm in love with life, I've got a lot more energy to face (it). By celebrating what's right, we find the energy to fix what's wrong. And (it’s) so important … to have a vision that will give us energy at a time when so many things are trying to take it away.”

Even when focusing on the good doesn’t come easily, Jones believes that we can become champions of finding the positive in the world the same way we become proficient in anything: practice, practice, practice.

“Unless you … make it a practice, it's not going to change your life,” Jones acknowledged. “This means that, every day, you have to consciously say, ‘I am going to celebrate what's right in my life.’”

So, how do you begin celebrating the good? In Jones’ opinion, it helps to tap into your passions — that is, things that “fill (your) cup”. This can be anything from sports to music to good conversations, and everything in between. It’s just a matter of finding it in your own life.

“You're going to have to go out and say …, ‘I just had an amazing interaction with my friends. I just saw the sunset. I just read a good book,’” Jones suggested. “Whatever it is that fills your cup up to where you overflow (and) you say, ‘These are things that make me glad to be alive.’”

By taking all four of these steps in our lives, Jones truly believes that we can change our perspective — and, ultimately, change the world.

“We can celebrate the best in every situation and every person every day,” Jones said. “We'll have the tools and the vision to face any challenge … while celebrating, with gratitude and with grace, all that we've been given. That perspective, that vision, it will change your life, as it has changed mine.”