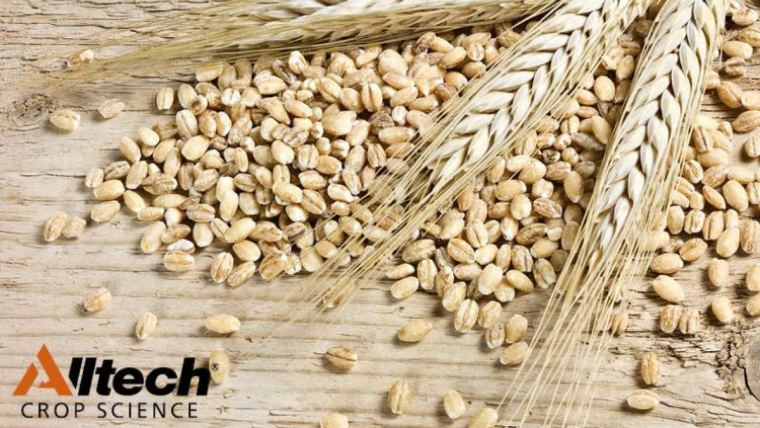 According to the University of Kentucky College of Agriculture, Food and Environment, a record $6.5 billion in agricultural cash receipts was reached for Kentucky in 2014. Yet, while wheat is a staple for Kentucky farmers, profitability remains challenging.

Alltech Crop Science has conducted trials on 82 crops in 34 countries, but they also believe in working with local universities to provide cutting-edge technology for the state’s grain crops.  The challenges faced with wheat in particular represented an opportunity for research to deliver practical solutions. Therefore, Chelsea Jacobson, Alltech Crop Science research coordinator, recently conducted a nearly yearlong trial in partnership with the University of Kentucky to study the effect of amino acids on soft red winter wheat production.

The research focused on the foliar application of nitrogen (25–75 percent protein) in the form of amino acids at two key stages:

The timing of the first application was important for several reasons, said Jacobson.

“Tillering begins in fall and will not be complete until early spring,” she said. “Head size is determined during this stage, as well as the number of spikelets per spike.”

Both of these play a key role in grain yield.

It’s important for producers to take measures to improve yield before Feekes 5, Jacobson noted, as the wheat plants emerge from the cold period of weather. The second application, at early boot stage, is just as critical.

“It’s important to protect the flag leaf from disease and other stressors during this time,” added Jacobson. “This supports grain fill and is crucial to high yield.”

The study showed a numerical increase in grain yield and test weight for the treated wheat compared to the control, reported Jacobson. One amino acid treatment showed a yield advantage of 4 bushels per acre.

Another benefit was a numerical decrease in grain moisture at maturity.

“This can help farmers get into their fields quicker and get their crops harvested,” noted Jacobson.

Organic nitrogen delivered to the plant in the form of amino acids provides a source of organic carbon to encourage soil microbial populations.

“Plants must synthesize their own amino acids,” reported Jacobson. “This technology can ultimately reduce the plant’s workload and allow for an optimized uptake of plant nutrients.”

While yield and return on investment are key to today’s commodity prices, natural nutrition can in many cases also help farmers reduce the need for synthetic inputs.

“It’s all about keeping plants healthy and taking a more natural, bioavailable approach,” concluded Jacobson. “Farmers are looking for alternatives to synthetic chemistry. This new research shows the benefits of amino acid technology.”

When growing soy, the ultimate goal is to maximize crop yield while maintaining crop and soil health in order to continue using that land for soy production or as part of a crop rotation schedule. Each step in the life cycle of the plant has its particular needs, but when focusing on the soybean flowering phase, some special care can result in...