What does the animal feed industry tell us about consumer food trends?

Media hype about food trends may indicate people are choosing to eat less meat, but are they?

For nine years now, Alltech has analyzed the animal feed industry through its annual Global Feed Survey, a yearly collection of data representing information from over 140 countries about feed manufactured for animal protein production. Those in the industry find this information useful; it’s an indicator of growth and progress and serves as a good resource for policy-makers, financiers and industry groups and associations. But why should the rest of us be interested in this data? What can the feed industry tell us about food trends, consumer demands and people’s tastes? As it turns out, quite a bit!

Alltech’s 2020 Global Feed Survey not only established the trends in feed production — it also gathered information through a qualitative survey to home in on these hot topics and see what their effect might be on animal agriculture and the feed industry as a whole. This year, the feed survey was presented by Dr. Mark Lyons, president and CEO of Alltech, who moderated a panel discussion featuring industry experts in food and agriculture, including:

More than 1,200 people tuned in to watch these specialists dissect the data and analyze how feed production numbers reflect global trends.

The feed industry is at the very beginning of the food chain. The amount of compound feed (the grains fed to animals) grown in each country indicates what people there consume. The hype around current food trends might indicate that people are losing interest in animal protein, citing concerns over climate change or animal agriculture production practices. Whether consumers are truly seeking animal protein alternatives or not, however, is revealed by determining the number of animals being consumed and, therefore, how much feed is grown to produce those animals.

The feed survey actually indicated that the global consumption of meat is on the rise.* “Consumers are making more and more demands on [agriculture], one of them being alternative proteins,” Lyons said. “However, the impact may not be as strong as we once believed.”

Not everyone is eating soybeans and seaweed

As the results of Alltech’s annual animal feed survey revealed, if people are seeking alternative sources of protein, it’s not to the extent that the media hype might indicate. If anything, feed production for chicken, beef, milk and eggs is increasing, which means that people are still consuming those foods — and at a higher rate. Demand is on the rise, and countries that are developing and increasing in wealth are seeking more animal-based foods, including meat, milk and eggs. In countries where there is already a strong demand for meat and animal products, the idea that the population is making a major shift continues to circulate — but so far, that isn’t actually the case.

There are challenges associated with plant-based diets, such as ensuring that the body gets all the essential amino acids it needs. Some grains and legumes can serve as supplements, but they do not have the same level of bioavailability as meat. Consuming meat, milk and eggs is one way to guarantee that the body gets complete proteins. Despite claiming interest in alternative diets, nutrition is still a concern for many. As Martins explained, “Income is increasing in emerging markets, but people still aren’t eating well. It’s not enough to (just) feed people; the nutritional value must be there.”

Many meat substitutes also contain an array of mixed ingredients in order to appeal to the senses the way meat does: through taste, smell, texture, sight and sound. These additives, however, don’t appeal to the clean-label requests of many shoppers, who much prefer the one-ingredient label of traditional meats. Additionally, consider high-protein diets, such as keto and paleo, many of which rely heavily on animal protein for sustenance.

According to the 2020 Alltech Global Feed Survey, the need for animal protein as a food source is growing and will continue to grow, particularly in the poultry sector. In reference to African swine fever (ASF), which has decimated the pig populations of Asia-Pacific and Europe, Smith said, “The events of the past 18 months are moving us closer to the crossover point, where the world will consume more poultry (than pork).”

Eating plants won’t save the planet

Consumers often cite environmental concerns as one of the main reasons they prefer a plant-based diet. Unfortunately, two-thirds of agricultural land, also known as marginal land, is unusable for crop production; it is either too dry or the soil quality is poor. This land is, however, perfect for ruminant livestock animals, who can digest roughage and convert it into something humans are able to digest: meat and milk.

Conventional agriculture has gotten a bad reputation for greenhouse gas (GHG) emissions, but what is often overlooked is the opportunity agriculture has to help alleviate not only its own emissions but, potentially, emissions from other industries as well. That’s right — farmers could effectively have a positive impact on GHG emissions. (If you want to learn more about this, check out our blogs on methane digesters and silvopasture, a natural approach to raising cattle in forested pastureland.)

If all 7.5 billion people on this planet decided to only consume plants, it would be very difficult to farm enough crops to provide everyone with a nutritionally balanced diet. Animals provide a way to turn the nutrients from our earth into something our bodies can use very effectively.

Technology to the rescue!

Advanced technology in agriculture (known as ag-tech) is also improving efficiencies in production by allowing farmers to use real-time data to maximize production, improve animal welfare, reduce waste and more. Precision agriculture allows farmers — including growers and producers of feed ingredients, such as corn and soybeans — to produce more with less.

We are currently producing 60% more milk with less than half as many cows as we once did, and this evolution has taken place over the span of just one generation. In the last 70 years, we have significantly improved feed efficiencies by gaining a better understanding of how the animal operates biologically, what type of nutrients it needs and how those nutrients are best absorbed by the body.

The Alltech Global Feed Survey shows us that the animal agriculture industry is strong and growing. Improved agricultural practices and technological advancements put agriculture and food production in a positive light. It’s not all doom and gloom — but “the messaging to consumers is very important,” as Lawless said.

There is clearly a disconnect between the potential of agriculture and the understanding of consumers, who are increasingly less knowledgeable about where their food comes from or how it is produced. “Consumers have never cared more, or known less, about where their food comes from,” said Bobo. Consumers are certainly keen to learn more about food production, and it is up to agriculture to tell the story.

*There was a decrease in overall feed production in 2019, but this was largely a result of African swine fever, a viral disease that is decimating the pig population, particularly in Asia-Pacific and Europe. All other indications for animal feed production show increases in production. 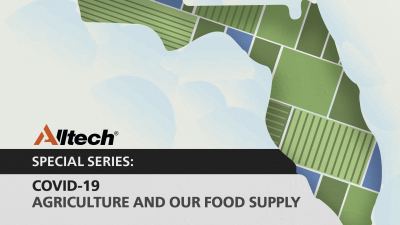 As consumers rush to stock up on staples, orange juice has made its way to the top of the shopping list. How will the coronavirus crisis impact an industry that has been pummeled by hurricanes and citrus greening? Andrew Meadows, director of Citrus Mutual in Lakeland, Florida, shares his insights on how shifting consumer demands will impact the...

Calving is coming to an end, giving producers the ability to breathe and recover from, arguably, their most stressful time of year. However, for the calves they are raising, the most stressful period is yet to come. The weaning process is widely recognized to be one of the most stressful stages within the beef system....