Are you giving your cows the nutrition necessary to contribute to the success of calving and beyond?

Article reposted with permission from CRYSTALYX®.

Fetal programming, also known as “developmental programming,” has been a hot topic for a number of years now. When we consider fetal programming from a nutritional perspective, we think of the lasting impacts gestational maternal nutrition can have on calves. I have often heard farmers and ranchers say, “If you take care of your cows, they will take care of you,” and this certainly rings true in this instance.

We often think about fetal programming during late gestation. Naturally, we begin thinking about the upcoming calving season after last year’s calves are weaned. We know that nearly 70% of fetal growth occurs during the last trimester — but for a calf to be able to grow at an exponential rate during that time and remain healthy during its postnatal life (which will correlate to increased performance and profitability), giving it a prenatal head start during early gestation will be most beneficial.

Unfortunately, however, maintaining a focus on nutrition often gets put on the back burner during early pregnancy. After all, there’s a lot to keep up with in the summer! Cows and bulls are turned out on grass, we’re busy with breeding, and we get caught up baling forages to feed cows with in the winter. You may think that the cows are doing just fine nutritionally, but they — and their developing calves — might be missing out on more than you realize. 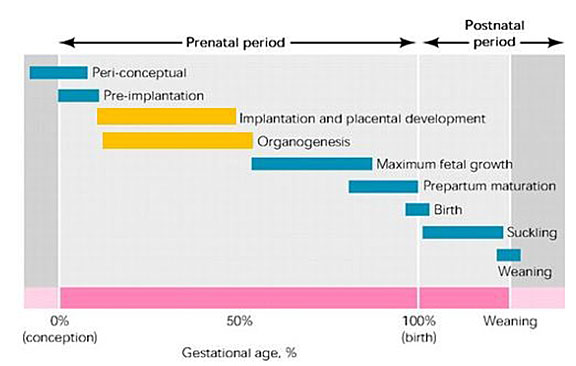 Get with the (fetal) program

The placenta and many vital fetal organs develop during early gestation, which continues up to approximately day 90 in cattle. The placenta is responsible for conveying all of the nutrients and oxygen to the growing and developing calf; it also removes waste products. The placental formation in early gestation is crucial for optimizing vascularity and nutrient transfer to maximize blood flow, which is important for the calf’s overall growth. Research measuring the placenta and studying its effects on gestation has shown that nutrient restriction during early gestation can continue to negatively impact the animal throughout the entirety of gestation, even if the cow is provided with their nutritional requirements during late gestation. The impact of restricting nutrients early on includes smaller placenta sizes and decreased blood flow to the calf (Vonnahme et al., 2007, 2013).

Along with the placenta, the calf’s organs also develop during early pregnancy. Cells are dividing at this time, and this early formation of the organ system is crucial for the calf once it is born. These developing organs — such as the lungs and the gastrointestinal tract — are necessary not only for survival, but also for reproduction and the growth of muscle cells. Studies show that nutrient restriction to the cow during this phase can negatively impact organ development and productivity later in the calf’s life; in other words, restricting the cow also restricts the calf’s genetic potential. Genetic selection happens when the producer is making mating decisions, but you can program the calf during gestation to help increase the profitability of your genetics by providing ideal growing conditions. You have worked too hard with too many generations of your herd to take a step back in calf performance potential by not providing the necessary nutrients during gestation.

In order for these vital organs to develop properly — and to maximize your calves’ genetic potential — make sure your gestating cows don’t run short of critical nutrients, like macro and trace minerals, vitamins and protein. These nutrients generally must be delivered to the cow in forms that go beyond simple pasture forages. An easy way to ensure that these nutrients are provided is through a self-fed supplement, such as CRYSTALYX® Brand Supplements, which are formulated with Alltech’s organic Bioplex®  trace minerals.

A simple way to provide supplementation

As we wrap up the breeding season and get closer to the fall season, pasture conditions and forage quality often begin to decline. We should keep in mind that this can be a stressful time of year not only for us, but also for our animals. Consider what your cows are consuming and think about whether they might benefit from supplementation, beginning now and continuing through early gestation and beyond. CRYSTALYX Brand Supplements are a simple solution to make sure that your cows are consuming the nutrients that both they and the calves by their side and in utero need.

Let’s face it: the summer months are a busy time for us all. Whether you are getting things done around the farm or ranch, catching up with friends and family, or just trying to stay cool, your cows out on pasture may not be getting as much attention as they need. After all, they can’t take any time off during the critical period of early gestation. Fortunately, you can minimize time and labor — and give yourself peace of mind — by putting out a self-fed CRYSTALYX barrel, which will be available to your cows around the clock. Your cows will essentially be taking care of themselves, and by raising better-performing, more profitable calves, ultimately, they will also be taking care of you.