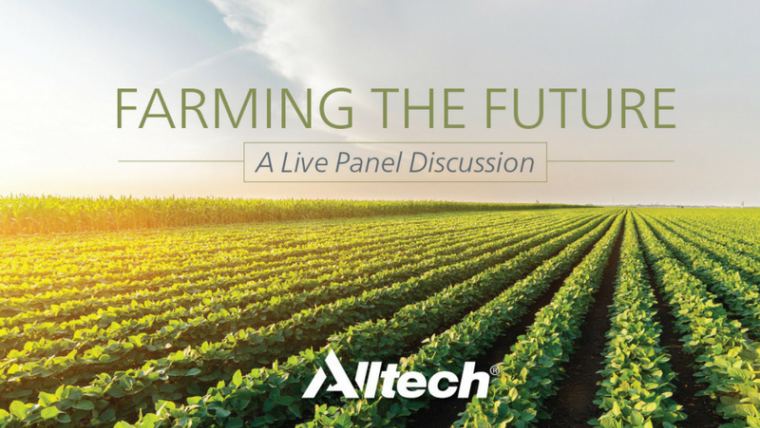 What does the future hold for farming and the entire food supply chain?

Everything from automated farm implements and nonstop reams of data to consumers’ ability to trace their food to its source and create supply chain reversal, according to a panel of agribusiness experts.

Looking ahead into that near (and already here) future was the basis of a live video panel discussion entitled “Farming the Future.”

What’s changed about what it means to be a food consumer?

She cited the rise of “engaged eating” — taking the consumption of food beyond simply eating to making food choices that are considered nutritious, safe, culturally appropriate and produced in environmentally sustainable ways.

“A big piece of that is the millennial consumer,” she explained. “Technology is all around them. They get information in different ways. They have different values. They’re the biggest demographic group in the U.S., and they’re just at the stage of having families and moving up in their income potential, so they’re very attractive to the food industry.”

Shelman noted that the millennial generation, born between the early 1980s and 1990s, has a much greater understanding of the relationship between health and food.

“What they eat is part of their identity,” she said. “Food actually reflects who they are as a person, as well as their values.”

This presents what, in her view, may be the food industry’s biggest challenge.

Shelman noted that these “prosumers” have a strong belief in their purchasing power’s ability to affect the change they wish to see in the world. They “vote” with their dollars.

What’s changed about what it means to be a farmer?

Aidan Connolly, chief innovation officer at Alltech, recognized that the rate of change occurring in agriculture is outpacing comprehension of its scope and scale.

“I think that if anybody thinks that agriculture is going to be the same in 20 or 30 years, they’ve got their head in the sand,” he said.

Connolly, who has written about digital disruptions that are currently transforming agriculture, cited those technologies: “…robots and drones, blockchain, nutrigenomics, the internet of things, virtual reality and enhanced reality — these are technologies that can fundamentally change the ways in which we understand what happens when we grow plants or animals.”

Perhaps the most widely felt game-changer in agriculture has been the arrival of “big data.”

“You have a tool here that looks at millions and billions of observations, whether it’s productivity, food intake, the way we grow our crops, how much rain you get — all of this can be integrated into very precise models, and that’s going to be the big change in agriculture,” said Dr. Karl Dawson, chief scientific officer at Alltech. “We’re talking about moving to ‘armchair farming.’ We’re going to be making our decisions from a site, sitting in front of a computer, looking to see what we can predict in the future. That’s a tremendous tool that we’ve never had.”

What does this imply about the knowledge and skills required of the 21st-century farmer?

“I think we’re looking at a fundamental change in what that person is going to look like,” said Connolly. “They won’t necessarily grow up on a farm. They might grow up in a city. They won’t necessarily have the skills of understanding animals or plants. They will understand data, analytics, equipment and decision-making about all the various technologies and which investments should and should not be made. So, dramatically different skills from those used for the last thousands of years will determine who is and who is not a farmer.”

Key among those talents are analytical skills that are tied to data and information, according to Michael Boehlje, distinguished professor of agricultural economics at Purdue University.

“We are going to have to increasingly develop that skill and feel comfortable with looking at numbers, looking at information,” he said.

Boehlje emphasized that this doesn’t mean a farmer has to transform into a number cruncher but will need to understand the stories that the numbers tell.

“It’s not just the story they (data) tell in terms of average yields,” he explained. “It’s the distributions that count. It’s what happens when you are in parts of your field where you have low yields and where you’re getting high yields as well.

“The same is true with animals,” continued Boehlje. “We’re starting to see different animal performance even in the same pen. That’s a function of their genetics and a number of factors. We’re going to get more granular in the data. So, data assessment, data summarization, data visualization, strategic thinking, risk assessment — those increasingly are going to be the skills that we need to have.”

Attracting a new generation of talent to farming

Shelman agreed that new and emerging farm technologies will enable agriculture to be successful in meeting increasing demand, but attracting and retaining that new generation of farmers requires something more.

“Supply and demand economics don’t tend to move in lockstep,” she said. “For instance, in crop farming in the U.S. today, prices are relatively low compared to other times in the last five years. So, there’s a need to maintain an economic viability for farmers to survive — and, in particular, to attract new, younger farmers.”

Shelman pointed out that the average age of the American farmer today is reaching 60 years.

“We need new talent, and they will only come in if there are attractive returns in the sector,” she said.

This new generation is being attracted to farming for very different reasons than their predecessors.

“It’s about being able to understand the market,” said Shelman. “It’s, ‘How do I deliver this differentiated product that has extra value?’ So, it’s not just about producing at the lowest price, but producing what different segments of the market want and being able to sell into those channels.”

The industry is seeing the rise of “demand-driven chains with consumers increasingly telling the entire chain ‘what we want, how we want it and how it ought to be done,’” according to Boehlje.

“So, a really important skill that is going to be much, much more important for farmers is going to be understanding and working in an interdependent system, rather than as an independent farmer, that is very focused on relationships, collaboration and interpersonal skills — things that many farmers have historically not liked to do,” he said. “But those are going to be skills that will be essential to being a successful farmer.”

So, how can farmers change the way they sell foods?

Consumers are moving beyond the traditional demand for cheap, accessible, safe food to shopping decisions that align with their values, according to Shelman.

“I think that provides some opportunities at the farm level,” she said. “First, to become much more market-oriented and know what the market is interested in buying rather than what you want to sell.”

Shelman cited as examples the rise of brands such as Laura’s Lean Beef or Pete and Gerry’s eggs, items that come with specialty propositions.

“If you look at the Amazon Fresh website, you can buy hamburgers from a single cow,” she said.

She acknowledged that dealing with the market at such a level is not for everyone in farming, but it’s increasingly popular among consumers.

“There’s tremendous resistance in the system to making those kinds of changes because our system has been set up to move big quantities of relatively undifferentiated products,” said Shelman.

Dawson cautioned, however, that there remains a messaging gap in the commercialization chain that has failed to win the buy-in of the middleman.

“Alltech Angus was an example of a succulent meat product that received very good reviews, but, quite frankly, we never could make it go because there was a barrier between us and the consumer,” he explained.

Still, noted Connolly, technologies enabling transparency and traceability are ushering in a new era for the farm-consumer relationship.

“We are seeing very large changes in consumer behavior,” he said. “Apps on phones, websites, the ability to see through cameras what’s actually happening on the farm, to see through blockchain what has occurred in the way your food is processed — these are all tremendous opportunities for farmers to engage directly with consumers of their food, and I think, eventually, that makes for a more profitable farming system.”

Success in farming, said Boehlje, will depend on an ability to move away from the mentality “If I produce it, they will come.” That, increasingly, is not the industry of tomorrow.