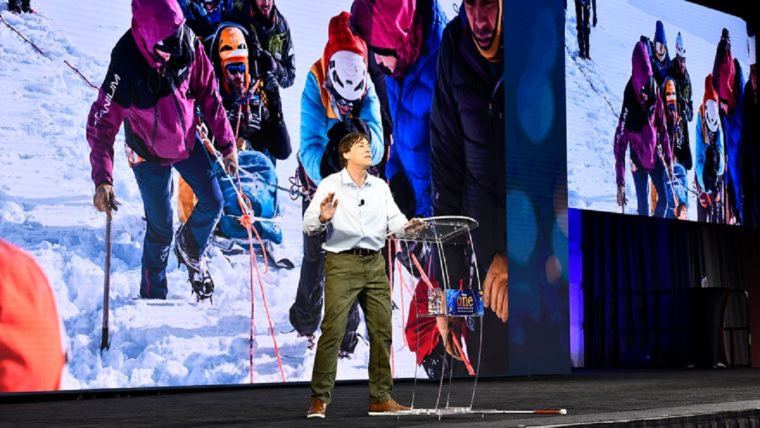 Blind mountaineer Erik Weihenmayer presented during the Alltech ONE Conference, which was held May 22 - 24, 2022.

True to form, blind mountaineer Erik Weihenmayer began his presentation at the Alltech ONE Conference by explaining that he had only recently gotten back from climbing Cotopaxi, one of the signature peaks of Ecuador. He had undertaken this adventure to support a climber with a broken back who was reaching 18,000 feet via a sled and a team of people all dedicated to helping him achieve his goal.

Weihenmayer admitted that while the result of this trip was uplifting and inspirational, the process and path of getting there were literally exhausting.

“Accomplishments are fun to talk about,” Weihenmayer said. “What I think doesn’t get talked about enough, though, is the struggle. Because for me, [honestly], it's been a struggle to live this life.”

Weihenmayer is no stranger to overcoming obstacles. He began losing his vision at the age of 14 due to a disorder called retinoschisis, but that never stopped him from achieving his goals. He followed a passion for wrestling in high school, going on to represent his home state of Connecticut at the national level. He also discovered a love of rock climbing, which has led him down an exciting and awe-inspiring road — one that has seen him reach the peak of the highest summits on all seven continents, and much more.

What he has learned from his life and accomplishments is that overcoming challenges is all about the approach. How we see and perceive these obstacles determines how we work through or past them.

Weihenmayer told the audience that while writing his second book, “The Adversity Advantage,” he learned that there are three types of people: quitters, campers and climbers. Deciding not to dwell on the quitters, he explained that campers are the people who start out with hope, optimism and excitement, but somewhere along the way, they stop. This can be due to fear of the unknown, a lack of confidence after making mistakes, cynicism toward the world or simply exhaustion from constantly running into life’s many barriers.

Climbers, on the other hand, are the rare group that never stops going, growing and evolving. They are always moving forward onto the next adventure, challenge and idea, no matter what the world throws at them or the setbacks they endure. The question, however, is this: How do we continue to climb when it is so much easier — and makes so much more sense — to camp?

Weihenmayer explained that his own personal journey to becoming a climber began when he first began to lose his vision. When his sense of sight was all but gone, he used what little he had left to watch television. It was then that he learned about Terry Fox, an amputee with a prosthetic leg who ran across Canada. Weihenmayer realized that what drove Fox was a light inside of him, a passion that fed off of the frustrations and challenges of life. From this point on, Weihenmayer decided to stop focusing on everything he had lost and chose instead to look inward, discover his own light and emerge as a stronger and better person.

“I was tired of building walls around myself and protecting myself from loss,” he explained. “I wanted to break out of that prison partly constructed by my own fears.”

This led to Weihenmayer learning rock climbing. But while he says that this path has proven to be exhilarating and exciting, he admits that there is an aspect that still scares him: the reach.

The reach is the trust we must put into the unknown in order to keep moving onward. It allows us to take advantage of an immense number of possibilities that are never seen. However, Weihenmayer also admitted that when we reach, we bring adversity into our lives, and while it may be easier to avoid reaching, it is only by facing this adversity that we can achieve greatness.

Weihenmayer continued by giving examples of people he has met who not only face their adversities but use them in incredible ways. He calls them alchemists.

“What these alchemists do, I think, is different,” Weihenmayer explained. “They figured out how to seize hold of that storm of adversity that swirls around us to harness its energy and use that energy to propel themselves forward to places they would have never gone to in any other way.”

Unfortunately, Weihenmayer explained that even when we have everything in the right place — the drive to succeed, the preparation for the task and a team backing us up the whole way — things still do not always go to plan. This was something he found as he tried to kayak through the Grand Canyon and, namely, the Lava Falls rapids.

Weihenmayer explained that everything had been prepared. He had trained for months with his team. They had developed a communication system that would enable him to easily navigate the course. However, on the day they attempted Lava Falls, everything went wrong, and he ended up overturned from his kayak, swimming blind through the rapids.

However, Weihenmayer said that he could not let this failure stop him, and that when we get knocked back, we all need to lean in, tap into the light inside us and try again. For Weihenmayer, this meant another — this time successful — attempt at the rapids, but for us all, it can mean the difference between achieving our dreams and never knowing what could have been.