For centuries, Wood Farm has been a mainstay of the Cambridge-Bedfordshire border in the United Kingdom. Waresley, the quaint village where Wood Farm is located, dates back to at least 1086, when it was recorded in William the Conqueror’s Domesday Book. Charles Mear, the current custodian of the land, believes his farm was established not long after. 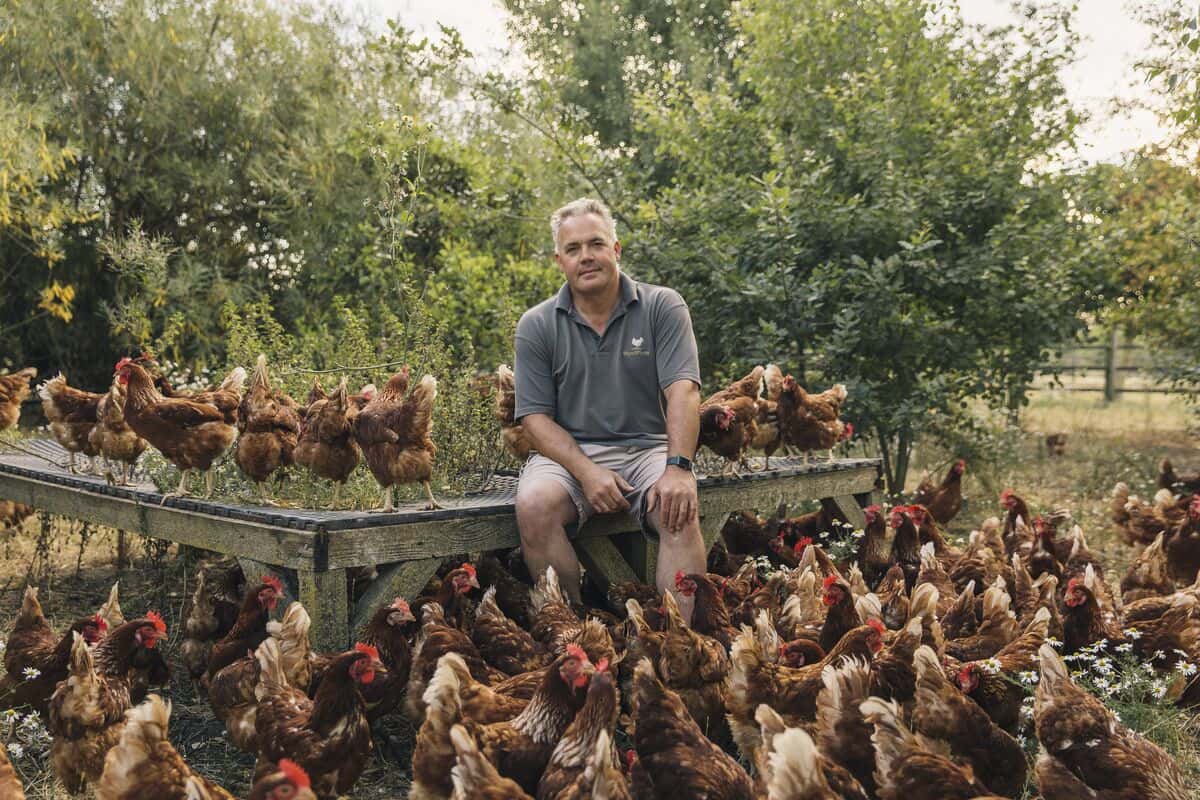 The Mear family’s residency on Wood Farm does not date back that far, but the land has been under their care for several generations. Charles’ great-grandfather moved his family there in 1948. Coming from a dairy background in Cheshire, he wanted to transition into arable farming, and where better than the relatively flat and wooded “breadbasket of the U.K.”? However, while the family set out to explore one way of farming, there were many changes on the horizon.

“My father, in the '80s, started more in producing fattening pork and pigs,” Charles explained. “And then in the '90s, we had beef cattle.”

After finishing school and working on the farm full time, Charles took it in yet another direction, seeing opportunity in the demand for free-range eggs. Free-range eggs make up nearly 12% of the European market. In the U.K. alone, the market share is around 65%, packing around 130 million dozens of eggs in 2022. Under Charles’ tenure, Wood Farm now houses close to 28,000 free-range hens.

A successful free-range egg production is not the only thing that Charles and his wife, Jo, have implemented on Wood Farm. Through basic changes in how they operate, the family is working toward carbon-neutral, waste-free commercial poultry production. Each change contributes to a significant impact on planetary health, from the welfare of their birds and land to cleaner energy for the community.

1. Giving back to nature

Waresley is known for its woodland, which is how Wood Farm got its name. Waresley Wood itself is famous for its bluebells. However, these stretches of wild countryside were not always considered something of which to be proud, but something that was in the way of production success.

“When my great-grandfather came here, the fields were much smaller,” Charles explained. “There was a lot more woodland, a lot more trees. And during the '60s, the government was encouraging farmers like my grandfather to rip up the trees, rip up the hedgerows, make the fields bigger, make them more productive, grow more wheat and feed the nation. That was the goal in the '60s, really, and probably early '70s.” 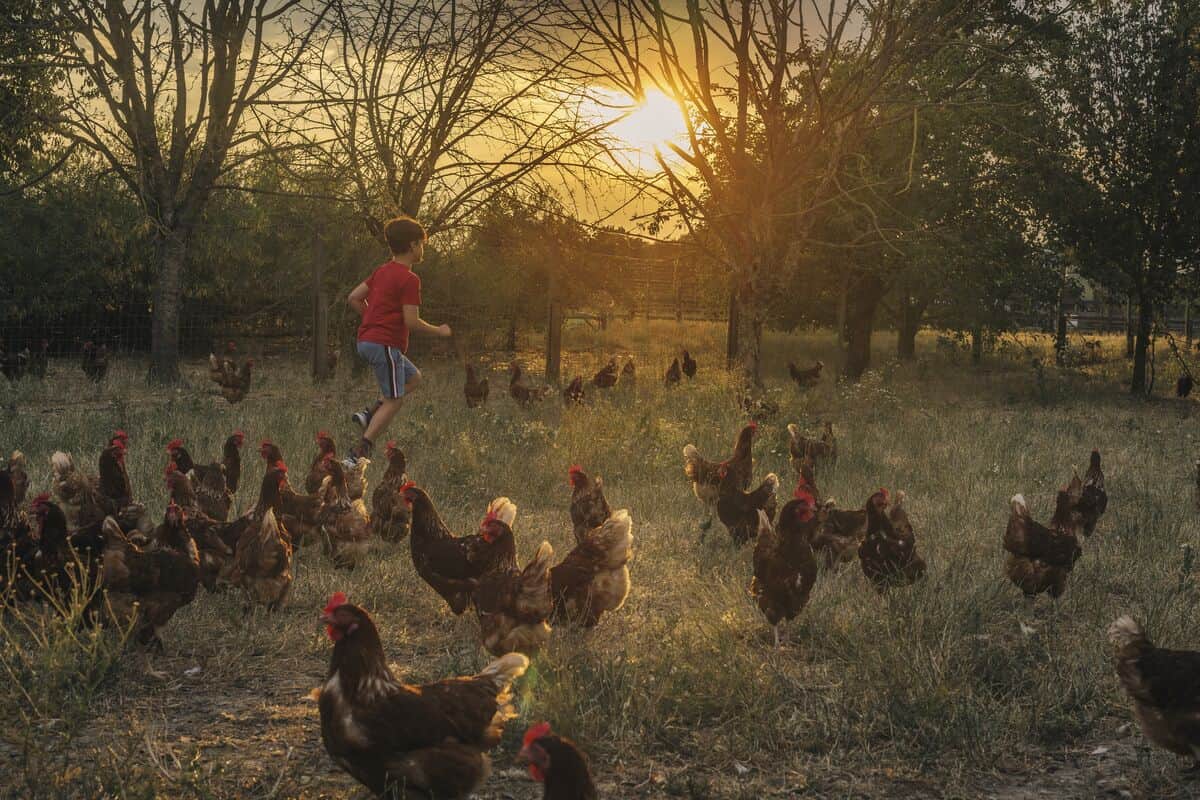 Since then, perspectives have changed, and farmers now see the environmental benefits of maintaining a connection with nature. On Wood Farm, the Mear family tries to give back to the land. This began with Charles’ grandfather, who sold Waresley Wood to the Wildlife Trust. Charles and Jo continued this tradition by replanting the hedgerows and woodland that were removed, reinstating natural wildlife habitats and creating corridors that cross through the farm. This simple act of planting trees also helps reduce the farm’s emissions by removing carbon dioxide from the air.

Along with giving back to the Earth, the Mears have reassessed how they source materials from it. They realized that the journey their feed supplies took to get to them was unnecessarily long.

“Originally, our food was coming from over 100 miles away,” Charles recounted. “And the lorries would turn up every five days, deliver us food, and then turn around and get wheat or barley from our neighboring farmers, take it back to their base and mill it, and then bring it back to us.”

This round trip had an unnecessary impact on the environment, one that the Mears negated with one simple step: building their own feed mill. By doing this, they could cut out the middleman and engage in “over-the-hedge" farming, where their neighbors can supply the wheat and barley that makes their poultry feed. Keeping this process in house not only brings their operation closer to carbon neutrality by keeping vehicles off the road — it also saves the Mears time and money. 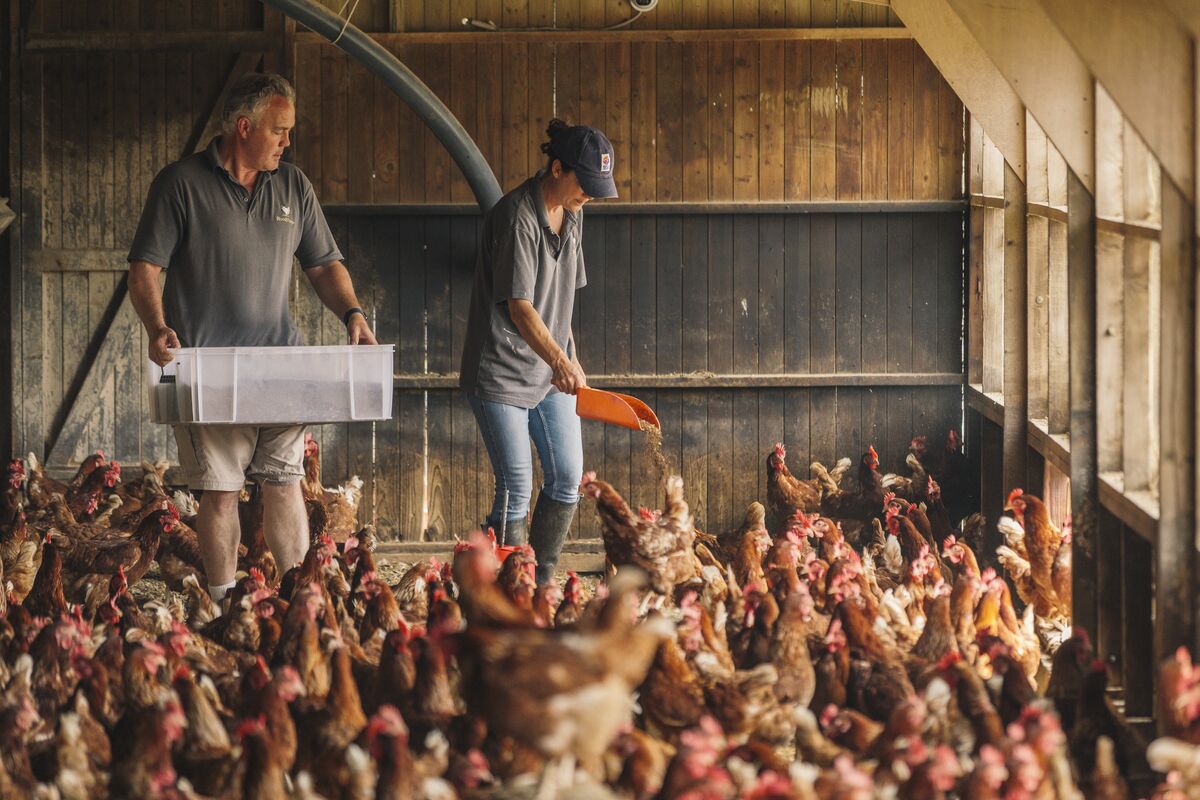 Another benefit of this process is that Charles knows exactly what is going into his birds’ diet and can ensure that what they are being fed is of the highest quality and will keep them healthy, inside and out. Combining this homemade feed with nutritional technologies from Alltech, the Mears have been able to implement an antibiotic reduction program, enabling their birds to build their natural defenses against health challenges. The positive results of this are evident when you look at the farm’s veterinary bills, or lack thereof.

“We've reduced our antibiotic usage immensely in last five years,” Charles explained. “We think a lot of that's because we've been using Alltech products and making our own food.”

Installing an on-farm feed mill may cut down on environmental impact, but the added power needed to run the mill could be a source of further emissions. Therefore, Charles and Jo also installed solar panels on the roof of their mill barn. 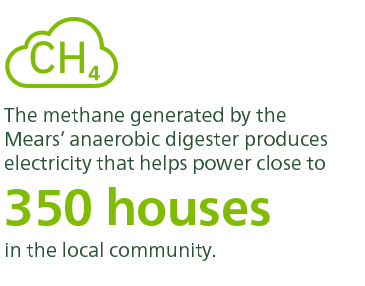 While this was the perfect solution for maintaining their carbon-neutral farming initiative, the couple considered how they could take it one step further and give back to the neighbors who provide them with their feed materials.

“Because we can't grow all our own feed, wheat and barley, which we rely on our neighbors for, we thought, well, our farm is too small to do that, but it's not too small to produce all our own electricity,” Charles explained. “So, we started putting in an application for an anaerobic digester in 2015.”

An anaerobic digestor, as Charles puts it, is like a concrete cow stomach. Materials fed into the digestor (in the Mears’ case, this is maize and rye silage, but can also include animal waste, like at Fiscalini Farms) are broken down by bacteria and converted into methane. The methane is then run through a generator that turns it into electricity. Of this electricity, Wood Farm only uses about 10%. The rest is provided to local villages and helps power close to 350 houses. 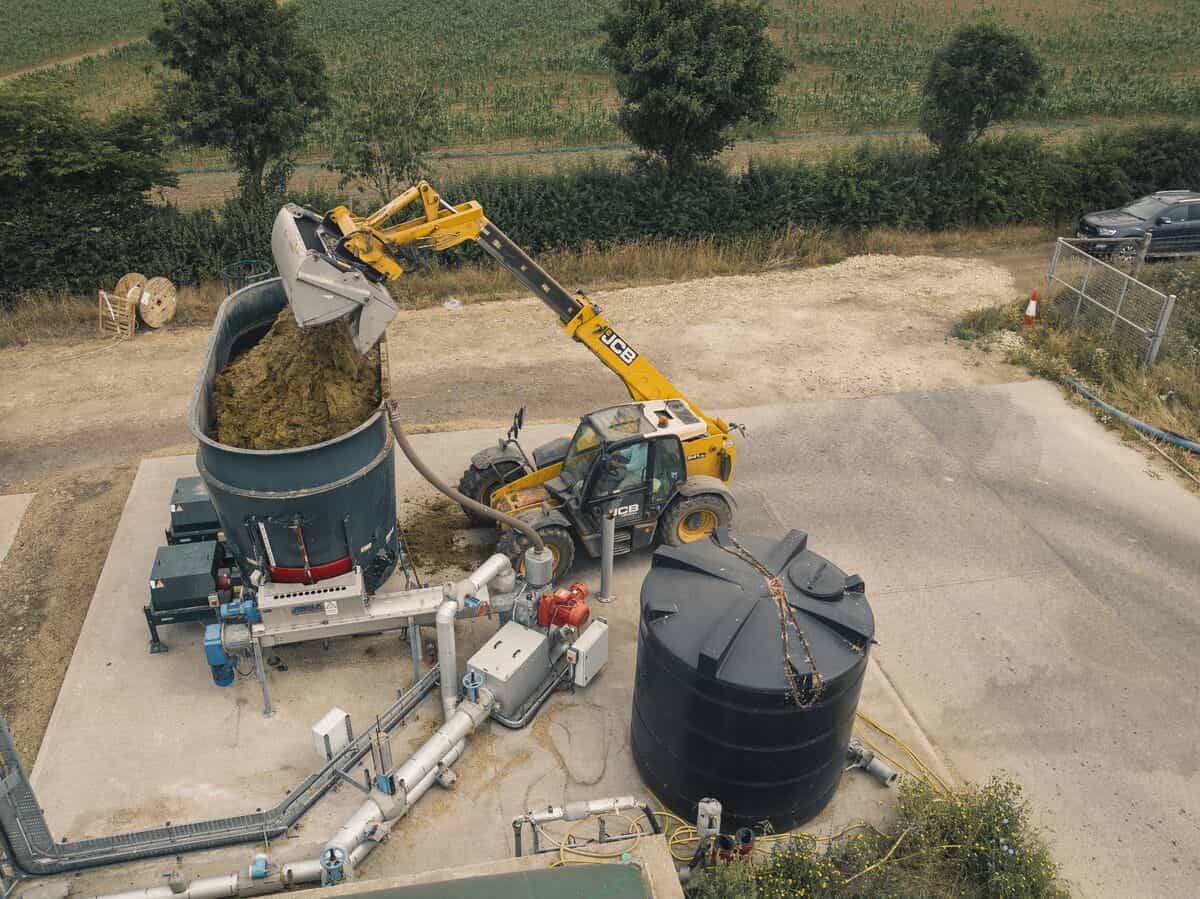 Free electricity is not the only benefit of the digestor system. Once the materials fed into the digester are broken down, the Mears are left with a digestate material. This can then be composted to create a nutrient-rich mulch that they spread on their crops, helping them grow more materials that can be fed into the digestor. This way, they have created a truly circular process with zero waste, just reward.

Furthermore, the excess mulch is sold to local farms and gardeners, helping diminish the overall carbon footprint of the community while also putting money back into the pocketbook of Wood Farm.

Of course, finding carbon-neutral alternatives to everyday on-farm practices is not always so straightforward. Some things require thinking outside the box. One such challenge is trying to source sustainable protein.

Wood Farm is fortunate to be able to grow most of the materials they need for their poultry feed or receive them from neighboring farms. However, protein is not as easily accessible. Traditionally, this would come in the form of soy that has to travel across the Atlantic Ocean to get into the diet of the Mears’ birds. Soy is a great source of protein, but relying on it would mean that Wood Farm could never truly meet its carbon-neutral goals. 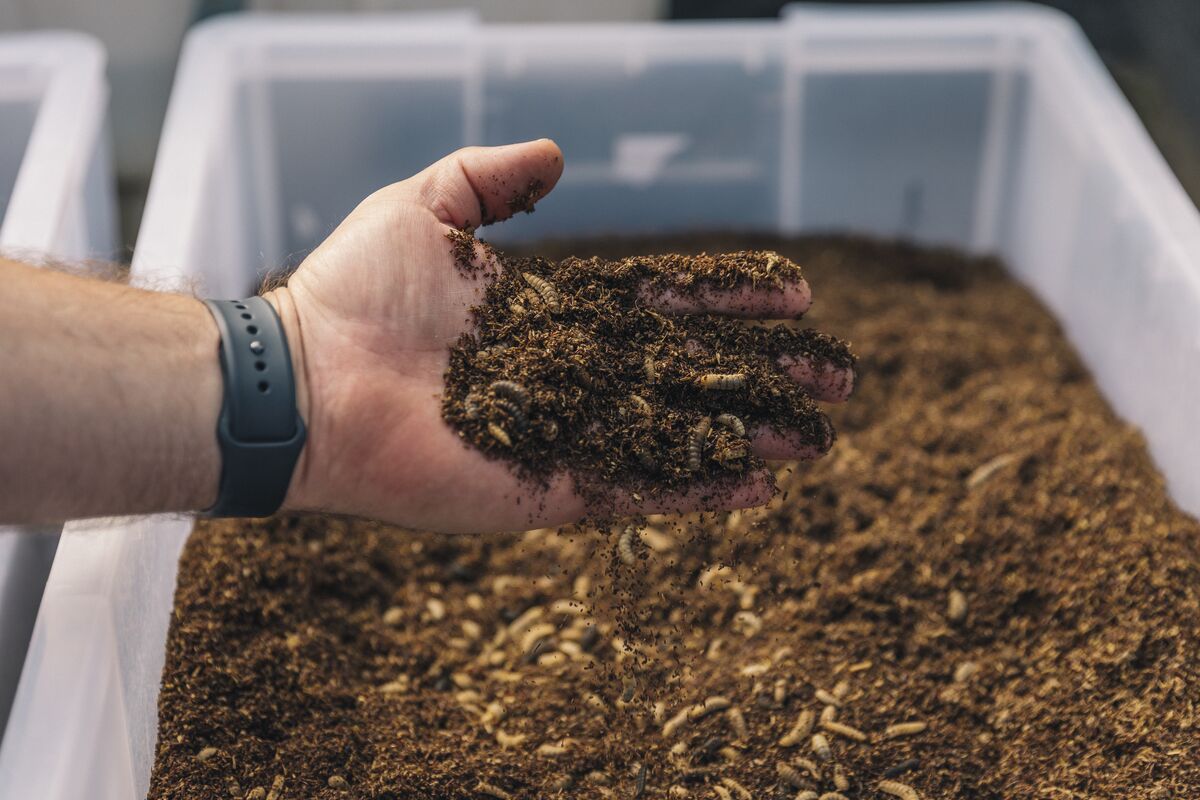 The farm began using black soldier fly larvae for chickens after being approached by the company Better Origin, a group of Cambridge University graduates whose primary goal is to reduce the consumption of soy in animal production. Using artificial intelligence, the company uses food waste to feed and raise its larvae. Within two weeks, the larvae can be added to animal diets as a sustainable source of protein. Better Origin believes that replacing the poultry industry’s reliance on soy in this way could help avoid 130 metric tons of emissions, repurpose 160 metric tons of food waste and save 5.6 hectares of land from deforestation per year, while increasing poultry productivity and welfare.

For Charles, it means a carbon-neutral, no-waste source of protein that he knows his birds enjoy.

“It's quite remarkable how they soon learn that you're feeding them this protein,” Charles remarked. “It gives them something to look forward to in the day.”

Having already opened and closed many chapters — from pigs to beef to poultry, and from the removal of woodland to its slow return — Wood Farm has already lived many lives. And by implementing these environmentally conscious changes, the Mear family is ensuring that that legacy will live on far into the future. 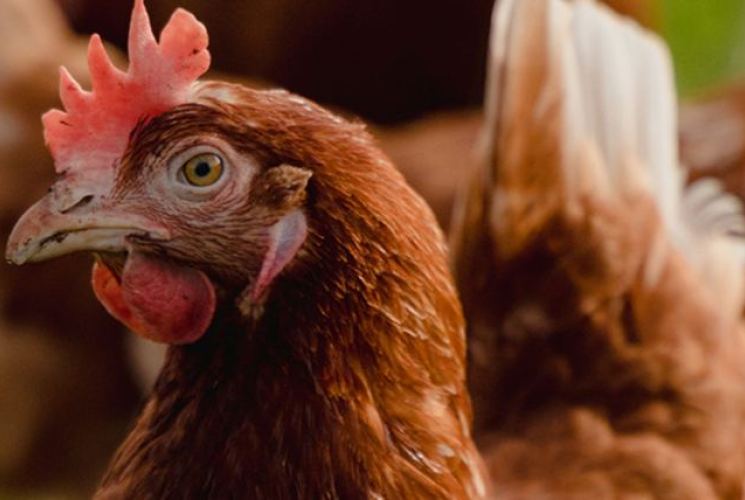 When it comes to raising livestock for food, producers are now focusing more on antibiotic-free production. Alltech has developed a pioneering program to help producers move away from antibiotics.