With feed the single biggest variable cost, Somerset dairy farm manager Ben Yates has partnered with Alltech to understand where feed losses are occurring and the financial opportunity behind these losses. Dairy Farmer reports.

Feed is the biggest input within a dairy business, with a typical 1.5 million litre herd spending around £250,000 on feed inputs annually. However, research suggests as much as one third of this could be being lost in both physical wastage and under-utilisation, putting a serious dent in margins.

While it’s impossible to eradicate waste completely, keeping feed waste below 10% should be the target, according to Alltech’s Programme Manager Ian Leach, who has set up an initiative to help dairy farmers slash feed waste and improve business profitability.

“Evidence suggests that feed waste on a typical dairy farm sits anywhere between 25 and 45 percent. To put this in perspective, this could be costing producers as much as £1 in every £3 spent on feed inputs,” says Mr Leach.

“The good news, there is plenty producers can be doing to cut the level of feed waste, both in terms of physical losses and under utilisation of feed within the cow herself. And, it’s fairly easy to achieve incremental gains. This provides the dairy industry with a significant opportunity to improve margins.”

Mr Leach says a holistic approach is key to improving the level of wastage on-farm. “There are multiple opportunities where feed waste can occur including within the field, during storage, at feed-out and, inside the cow. It’s important that dairy businesses recognise the areas where feed waste is occurring and take a whole-system view on the problem to achieve the best possible level of improvement.”

To support farm businesses in reducing feed waste, Alltech will be offering UK dairy farmers a free on-farm feed waste assessment. The assessment looks at multiple parameters across each area of stage within the feed process, starting within the field right through to the rumen, and identifies the pinch points where improvement measures should be focused.

“Field losses can be due to a variety of factors including; management of the grazing platform, efficacy of fertiliser applications, reseeding interval and harvest conditions. Measurements taken within the field to assess the potential level of waste include total utilisable dry matter volume, energy per acre and the level of poaching.”

“Feed losses during storage can be significant, particularly for ensiled feed, with 25 percent silage dry matter losses within clamps regularly seen. Rodents and birds can be a culprit, but also seepage and run-off from forage clamps, as well as mould spoilage, can cause a moderate degree of wastage,” says Mr Leach. “To calculate the level of wastage, ash loss off the top one meter, temperature, visible top loss and the presence of mould are all areas that are analysed.”

The extent of feed waste during feed-out largely depends on the feeding system in place, accuracy and attention to detail. “While the use of a diet feeder undoubtedly increases efficiency compared to a bale or clamp system, inaccurate loading will result in waste. Diet sorting can also be a big issue, so if the ration isn’t optimally mixed, the less palatable components can easily be left in the trough. Number of push ups, evidence of heating, physical feed wastage and ration sorting, are some of the measurements taken during this part of the assessment,” explains Mr Leach.

“There are several environmental factors which affect feed intakes, including; space to access feed and water plus water quality, ambient temperature, ventilation, and light and even small changes can have an impact on feed intakes,” he says. “For example, nominal losses will start to be observed at temperatures between 15 and 21 degrees. All of these parameters are measured during the assessment.”

Mr Leach says the biggest area for potential wastage is within the cow itself. “While rumen losses are a key driver, health and fertility are also critical control points. For example, if the cow was suffering from a metabolic disease or illness, the vast majority of feed wouldn’t be going into production resulting in a high degree of waste. Incidence rates of metabolic diseases, as well as fertility KPI’s including calving interval and services per conception are all assessed.”

“Drops in rumen function and feed conversion efficiency (FCE) is a driver of potentially high levels of waste, with unbalanced rations, inconsistency in diet presentation and feed intakes, and potential mycotoxin issues, being the key causes,” says Mr Leach. “Rumen health is assessed using a variety of measures including dung inconsistency, dung score and NASCO screen sieve. Feed conversion efficiency (FCE) is also monitored, with drops in FCE being an indicator of poor rumen health and function.”

Since taking over management of the herd in 2017, Ben has set out on a mission to transform the business, with a goal of operating to the highest level of efficiency and performance to achieve the best possible margins.

Despite already applying a high level of attention to detail across the business when it comes to feed management, he recognised there were potential areas where excessive waste could be occurring. This led him to undertake a feed waste assessment.

“We always need to be looking to make efficiencies. It’s easy to lose money in a unit of this size and we therefore have to scrutinise every aspect from cow health to feed health,” says Mr Yates.

Louise Clarke, ruminant specialist at Alltech explains the results of the assessment. “Overall the system is incredibly well managed, and Ben has already implemented a number of practices that support the reduction of feed waste.

She says during the feed-out process, the high attention to detail applied is paying dividends, with an insignificant level of feed waste identified at this stage. “All yard spillages are collected, feed is pushed up on a regular basis throughout the day, and the KEENAN controller connected to the KEENAN Vertical Auger diet feeder is keeping loading inaccuracies to a minimum. The recorded level of loading inaccuracies was less than three percent, significantly lower than in some systems where this figure can be as high as 45 percent.

“Storage was identified as one area where improvements could be made, particularly within the maize silage clamps, with financial losses of £24,000 per year for the maize clamp and £8,500 for the silage clamp. Total storage losses account for seven percent of the total financial impact calculated during the assessment.”

Mr Yates already has plans to install a new maize clamp and following Alltech’s feed waste assessment, it was suggested a slopping-walled clamp to aid side compaction along with increased attention on the walls of the clamp during buckraking.

Within the milking herd, there is huge potential for feed waste due to sub-optimal utilisation and this area provides the greatest potential for improvement within the system at Y-Farm Partnership. “While recorded metabolic disease incidence rates are less than 5 percent resulting in minimal impact, fertility is an area where inefficiencies were identified,” says Ms Clarke. “Calving interval is sitting at 380 days, with a 2.7 services/conception for the main herd, highlighting scope for improvement”

FCE was also something that could be increased. It currently averages 1.4 and the target should be 1.5. “With just a 0.1 reduction costing around £12,000 based on a 100-cow herd, this is having a significant financial impact, particularly due to the scale of the system. Specific nutritional strategies to prioritise rumen health should therefore be considered and are likely to prove highly cost effective due to the high financial impact of suboptimal FCE.”

Overall, Ms Clarke says Y-Farm Partnership has very few areas where waste is occurring, both physical waste and under-utilisation. “However, due to it being a large-scale system with annual feed costs in excess of 2.5 million, the financial impact, which takes into account a combination of actual wasted feed and underutilised inputs is very high, nearly £400k per annum. It therefore warrants investment in improvement measures,” she concludes.

Table 1: Financial impact of feed waste at Y Farm Partnership, based on a combination of physical feed waste and under-utilised inputs 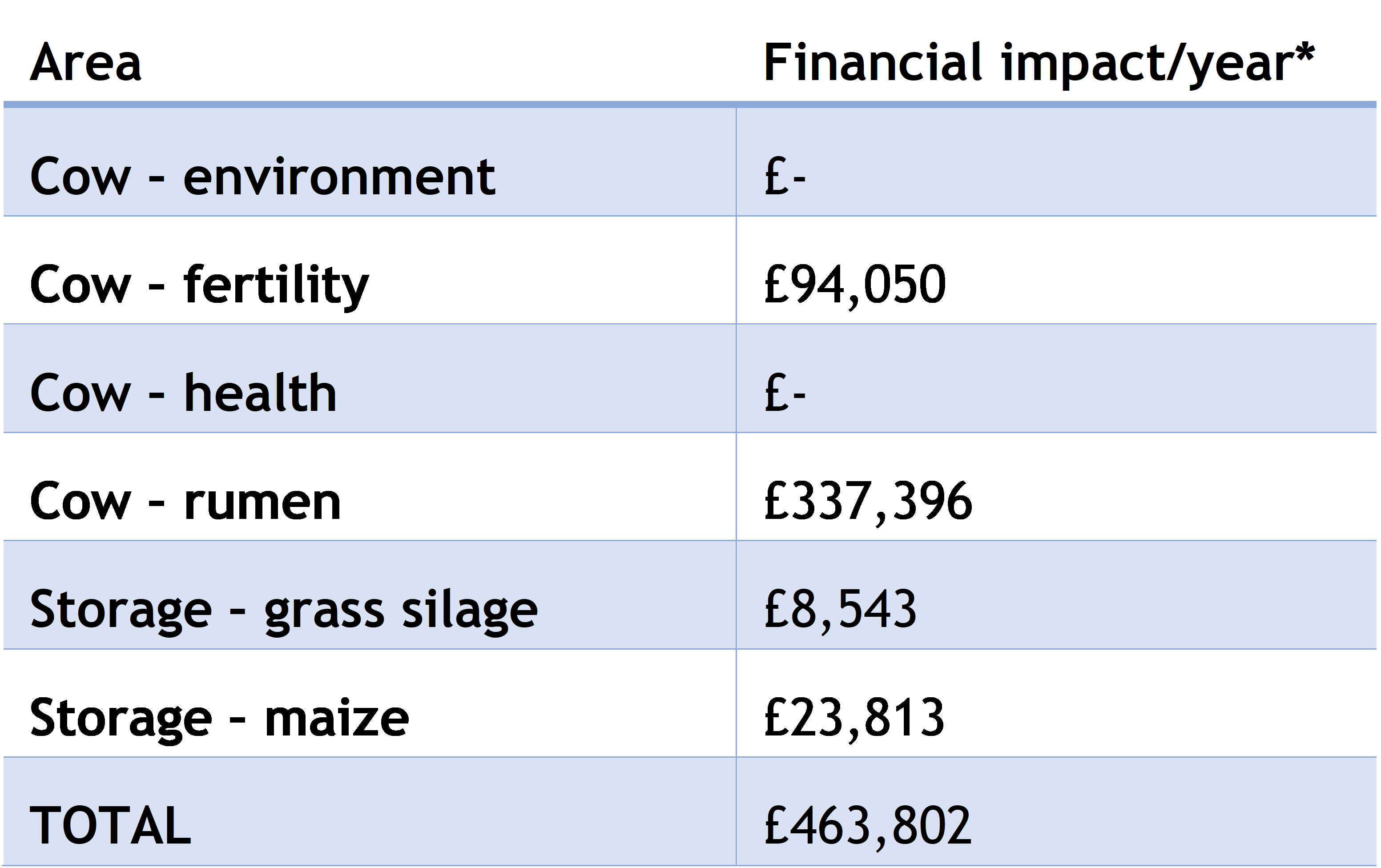 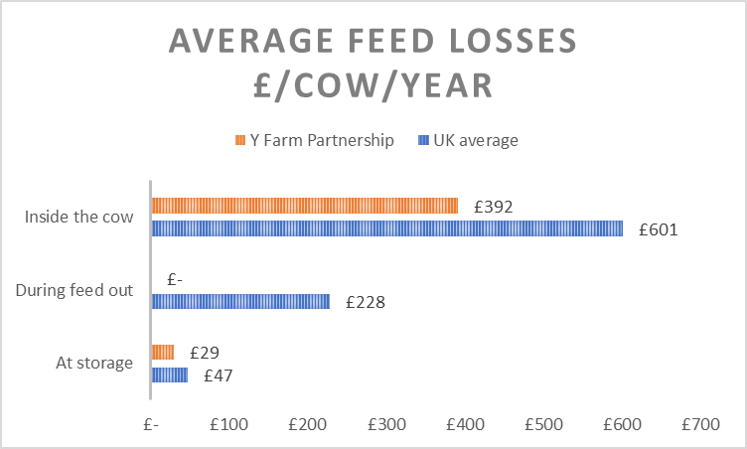 Farmers are being encouraged to keep a close eye on feed conversion efficiency (FCE) this winter, with just a 0.1 change in FCE affecting milk yields by as much as two litres per cow per day. According to Louise Clarke, ruminant manager at Alltech, many herds are not achieving the target FCE, which is contributing to an overall...

Buffer feeding a TMR could help overcome butterfat drops during the grazing...