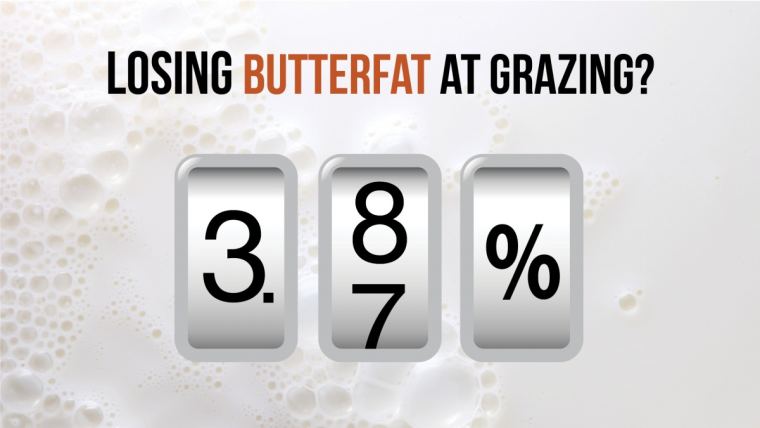 Butterfat levels experience the most turmoil in the spring, when cows are grazing lush grass with a high sugar content, as well as in the summer, when they are faced with varied grazing rounds and the potential effects of heat stress.

Butterfat is derived from a volatile fatty acid (VFA) called acetate, which is produced when fibre is broken down in the rumen. The rapidly digestible grass that grows from spring to summer produces less acetate due to its lower fibre levels, consequently reducing butterfat production. Poor rumen health can negatively affect the lining of the rumen, which can lead to reduced feed intake, poorer digestion, depressed milk production, and fertility and health issues.

Low butterfat is associated not only with acidosis but with sub-optimal rumen health overall — including low rumen pH, which can, in turn, lead to clinical and sub-clinical acidosis. Recent studies completed in Ireland showed that, during the grazing period, more than 50 percent of cows experienced low rumen pH and, consequently, low butterfat — but not all of them presented any other symptoms, such as acidosis.

A key indicator of sub-optimal rumen health is dung consistency. For instance, is the dung firm enough to form a thick, domed pat? Do you hear a slow clapping sound on defecation? Is this consistent across the herd? Farms yielding less than optimal butterfat levels, however, can still achieve a “good dung,” so it’s important to look at other indicators, such as body condition score variances and reduced cud chewing.

Here are our top five tips for maintaining or improving butterfat levels at grazing:

Are you feeding the right levels of concentrate? Is the digestible fibre content adequate compared to the sugar and starch content? Choose a concentrate with a high level of digestible fibre —beet pulp, for example. To prevent over-feeding, additional sources of fibre can also be incorporated into the diet in the form of forages and/or straw as supplementary buffer feeds. Avoid over-supplementing grass with conserved forage, however, as doing so might increase the butterfat percentage but will decrease butterfat yield through reduced milk yield.

Are you achieving yields in the range of 2,600–3,000 kilograms of dry matter (DM) per hectare, especially in the second and third rounds of grazing? Doing so will help increase your milk and protein percentages and butterfat yield. Be wary, however: leaf material that is high in energy and sugar but low in fibre could have a negative impact on the butterfat percentage.

Is your feed or forage mould-free? Mould is a potential indicator of mycotoxins, which can kill rumen bacteria and inhibit fibre digestion, resulting in lower acetate production and potentially lower butterfat levels. Since not all moulds are visible, be on the lookout for potential signs of mycotoxin contamination in your cows. Do you know what these symptoms look like? Visit knowmycotoxins.com for more information.

Does your diet include a live yeast? Alltech’s YEA-SACC® is the most widely researched live yeast culture to promote rumen stability, helping cows avoid variations in rumen pH that could interfere with dry matter intake, fibre digestion and butterfat production. Yea-Sacc works by metabolising excess oxygen and increasing the population of lactic acid-utilising and fibre-digesting bacteria. This helps remove acid, increase rumen pH and maintain or increase butterfat levels.

While many factors can help prevent a drop in butterfat, the addition of a live yeast product, like Yea-Sacc, has been proven to consistently improve rumen function by maintaining a higher rumen pH, increasing fibre-degrading bacteria and boosting volatile fatty acid production — all of which play an important role in improving butterfat production and overall milk solids.

To beat the loss of butterfat at grazing, ensure that Yea-Sacc is included in your feed. For more information or to place your order, speak to your local advisor today or call 01780 764512.

COMING SOON: top tips to prepare your cattle for another hot summer, as predicted by the Met Office!

Take the heat out of production

It seems timely writing a blog about heat stress exactly one week from the summer solstice. But with the current daily temperature at 13 degrees and parts of the UK having just experienced two months’ worth of rain in two days, it may have been more apt in February, when we had record highs of 20.6 degrees Celsius in Wales! For a mature...

From breeding to feeding your next show success

Picture the scene: your favourite cow has finally calved — the long wait is over! This was a perfect, trouble-free calving, and you can immediately see the showing potential of this new arrival. Over the next few days, you start to picture the up-and-coming events where your new “champ” could be shown. Breeding and genetics, however,...

The proof is in the cudding

Not all yeasts are created equal; strains differ the same way breeds of cow differ. Some yeasts can significantly improve feed efficiency and fertility, while others are less able to do so. For cows to be able to realise more potential from feed, producers are advised...