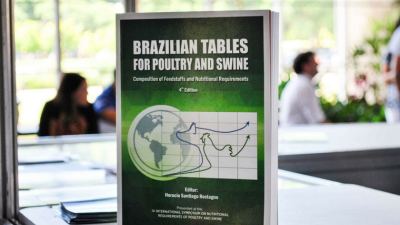 The fourth edition of “Brazilian Tables for Poultry and Swine” from the Federal University of Viçosa (UFV-MG) in Brazil, is considered one of the most important references in the formulation of feed for the global agribusiness industry. The new edition verifies, through several studies using Alltech products, the efficiency of organic minerals in the supplementation of monogastric animals.

[ARAUCÁRIA, BRAZIL] – The Federal University of Viçosa (UFV-MG) in Brazil has launched a new edition of the “Brazilian Tables for Poultry and Swine,” which is considered one of the most important references in the formulation of feed for the global agribusiness industry. This is the fourth edition of the material, which was presented during the IV International Symposium on Nutritional Requirements of Poultry and Swine on March 29 and 30 at the Federal University of Viçosa.

These levels can change according to the species and animal purpose, whether for production or reproduction. This is due to the bioavailability of the microminerals, which facilitate the absorption of nutrients in the digestive tract and can therefore aid in weight gain and feed efficiency in animals.

Other advantages of organic mineral supplementation are reduced impact on the environment and a greater return to the consumer.

“Our recommendations for the level of organic microminerals in diets can be lower than or equal to 50 percent of the recommended levels of inorganic minerals, which results in the best use of the minerals by the animal,” said Horacio Rostagno, professor at the Department of Animal Science at the Federal University of Viçosa. “The first thing to consider is the reduction in the excretion of microminerals into the environment through the feces, which we can observe in poultry production. This reduces the risk of environmental contamination by the decreased deposition of waste. It may even benefit consumers, who will find higher quality poultry and pork products because of the increased performance they had on-farm.”

This is the first time the tables have presented recommendations for replacing inorganic minerals with organic trace minerals and vitamins for supplementation. The new edition also includes updates related to genetic development and advancement in animals.

“We saw genetic advances related to feeding efficiency and conversion,” said Melissa Hannas, professor at the Department of Animal Science at the Federal University of Viçosa. “Because of this, we had to make adjustments in the calculations for the consumption of feed and ingestion of nutrients. All the energy requirements were recalculated to consider maintenance and production, resulting in a new definition of the ideal protein for feed formulation. Another highlight is the ratio of essential and non-essential nitrogen, which allows working with formulations to best meet the animal’s needs.”

On-farm, some producers are already putting the use of organic minerals into practice, and the results have shown efficiency and a gain in performance.

“In addition to the studies having proven the effectiveness of organic microminerals, we have been watching the performance of some industries that are using these ingredients,” said Marlene Schimidt, technical manager for Alltech Brazil. “For example, in poultry, it is possible to achieve improvements in the chicken carcass, feather production and egg laying. The inclusion of organic trace minerals will be a trend in the years to come, because it is directly linked to sustainability due to the decreased release of excretion into the environment.”

On March 28, prior to the launch of the new tables, Helvio da Cruz Ferreira Junior, a doctorate student at the Federal University of Viçosa, presented a study about poultry mineral balance during Alltech’s Mineral Efficiency Symposium. The event also included a presentation about trends in monogastric nutrition. Dr. Fernando Rutz, professor at the Federal University of Pelotas in Brazil, discussed his work on the impact of a sick or stressed animal on the production system. He also detailed a strategy to minimize this problem, including vaccination, nutrition, management, physiology, planning, and genetics.

The event also received a global perspective from Dr. Ramon Diniz Malheiros, research associate at North Carolina State University, who discussed nutrition news from the U.S., showing that Brazil meets all the necessary requirements to compete in worldwide production. According to Malheiros, the Brazilian industry and its producers need to be alert to changes dictated by consumers, antibiotic-free meats and preferences for cage-free production.