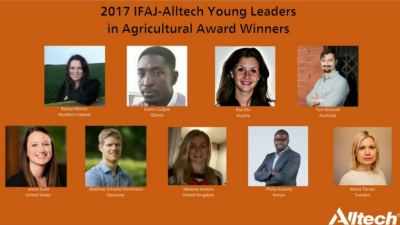 Nine agricultural journalists will travel to South Africa as the winners of the 2017 IFAJ-Alltech Young Leaders in Agricultural Journalism Award.

The winners chosen for this year’s 12th annual award are:

The award supports the winners’ participation in the International Federation of Agricultural Journalists (IFAJ) Congress and an intensive boot camp-style workshop. This year’s boot camp will take place from March 31 to April 1, prior to the IFAJ Congress in Gauteng, South Africa.

“Each year, we continue to see the best and brightest minds in agricultural journalism from around the world receive this award,” said Dr. Pearse Lyons, president and founder of Alltech. “Congratulations to these nine outstanding candidates. They exemplify the leadership, skills and dedication needed to communicate and connect the agricultural industry to a wider audience.”

The IFAJ-Alltech Young Leaders in Agricultural Journalism Award selection process involved a written submission, a critique of the candidate’s leadership potential, a demonstration of leadership abilities and a narrative explaining his/her desire in being involved in the program.

Bicknell has worked in a variety of communication and extension roles in agriculture since 2008. His media career has had a particular focus on horticulture and has included roles as the inaugural editor of horticulture business magazine Produce Plus, writer for Asiafruit Magazine, organizer and judge for the first PMA-Produce Plus Marketer of the Year Award and editorial consultant with agricultural publisher Coretext, which included writing for and managing a number of titles and communications campaigns.

Cudjoe has more than six years of experience reporting for one of the most reputable newspapers in Ghana, the Business & Financial Times. Cudjoe was honored as the 2016 Tourism Correspondent of the Year by the Ghana Tourism Authority for his contribution toward the development of the local tourism industry.

Jenkins, an agricultural journalist and public relations consultant at Agri-Hub since 2015, writes for numerous publications in the U.K., including Farmers Weekly, Farmers Guardian and Crop Production Magazine. She was awarded the British Guild of Agricultural Journalists John Deere Training Award in 2015.

Keitany is a business journalist with Kenya’s leading media house, Kenya Television Network. In January 2016, Keitany got the green light to produce and report on a weekly agribusiness feature segment named “The Next Frontier,” which has shared the stories of over 100 stakeholders in the agriculture sector across Kenya and East Africa.

Schulze Steinmann is deputy-editor-in-chief for Wochenblatt für Landwirtschaft & Landleben, an agriculture paper with a focus on the economy, markets and politics. In 2013, he was recognized as a specialist journalist of the year with the Karl Theodor Vogel Prize.

Scott is a digital content manager for Meredith Agrimedia. During the past four years, Scott has covered equipment trends for Successful Farming Magazine as well as its website and television show. In addition to creating content, she also works with the editorial team to coordinate news coverage on Agriculture.com and manages the distribution of content through newsletters and social media.

Törner writes for an agricultural magazine called Land Lantbruk, which is part of LRF Media, one of Sweden’s largest publishing houses. In 2014, she was awarded the Gunnar Ernest scholarship for ambitious students within the food and agriculture sector.

More than 100 young journalists have received the award and strengthened their communication skills and leadership in the agricultural journalism sector since the program first began in 2005.