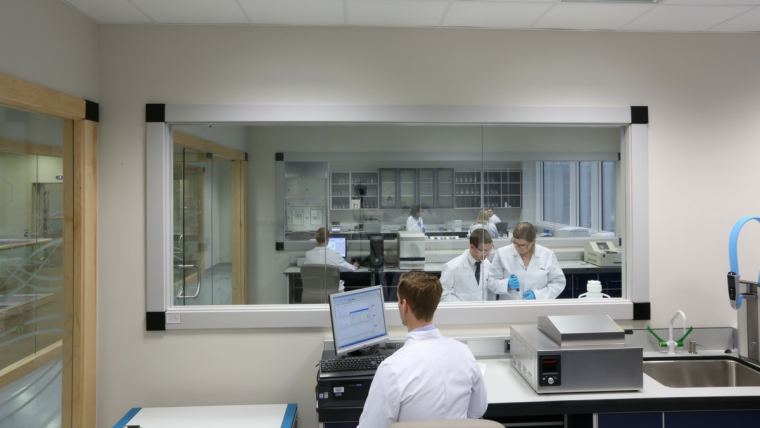 Alltech’s European Bioscience Centre, located in Dunboyne, County Meath, has been nominated for a US-Ireland Research Innovation Award. Now in its fourth year, the awards are a joint initiative between the Royal Irish Academy and the American Chamber of Commerce Ireland. The winners will be announced on 18 May at the Chamber’s annual dinner.

[DUNBOYNE, Ireland] – Alltech’s European Bioscience Centre, located in Dunboyne, County Meath, has been nominated for a US-Ireland Research Innovation Award. The centre has been nominated in the Multinational Corporation Category for research on how reduced diversity among intestinal gut microbes can affect animal health and can lead to the overgrowth of pathogens and the development of resistance. It also examines how increasing gut microbial diversity through nutrition and diet can aid in the control of these issues with the aim of reducing reliance on antibiotics.

Now in its fourth year, the awards are a joint initiative between the Royal Irish Academy and the American Chamber of Commerce Ireland and are aimed at recognising excellence in research innovation, creation and invention by an organisation as a result of U.S. foreign direct investment in Ireland. The winners will be announced on 18 May at the Chamber’s annual dinner, which will also welcome Minister for Business, Enterprise and Innovation Heather Humphreys.

Dr. Richard Murphy, research director at the Alltech European Bioscience Centre, said the nomination was a fantastic achievement for the research team.

“At Alltech, we strive for success,” said Murphy. “Our innovative solutions and cutting-edge technologies deliver real results for our customers and farmers, and so this award is a tremendous achievement for us as a research team. We are delighted to be nominated for a US-Ireland Research Innovation Award. This is a true testament to the hard work our team in Dunboyne put into researching innovative farming solutions.”

Alltech Ireland has long been a leader in both the Irish and European agriculture industry. Located in Dunboyne, County Meath, it became the first Alltech office to be established in mainland Europe in 1981 and today serves as Alltech’s European headquarters and bioscience centre.

Alltech’s European Bioscience Centre is Alltech’s pivotal research centre in Europe. The research work carried out at the centre specialises in cellular biotechnology, and the team of 20 scientists based in Dunboyne have developed unique insights into specific focus areas such as yeast cell wall architecture, trace element chelation, biomarker detection and microbial population dynamics. This work has resulted in the development of new solutions, services and analytical tools that improve producer profitability and efficiency.

“We have approximately 20 full-time scientists on-site in Dunboyne,” said Murphy. “We are very proud of our highly educated team and close links with Irish universities. The majority of the team have earned their Ph.D. or master’s degree with Alltech.

“Since redevelopment work on the facility was completed in 2013, the team at Alltech are very lucky to work in labs of exceptional quality and standard, thanks to Mrs. Deirdre Lyons, Alltech’s director of corporate image and design, who is responsible for designing our labs,” he continued. “This enables us to provide a state-of-the-art platform that enables young scientists to work with Alltech's expert team of biochemists, microbiologists and nutritionists.”

Alltech’s European Bioscience Centre is one of the company’s three major bioscience centres around the world, with each centre having its own innovative focus. The centres are complemented by more than 20 research alliances with leading universities around the world. Alltech’s research team are also responsible for over 500 patents awarded to Alltech globally.