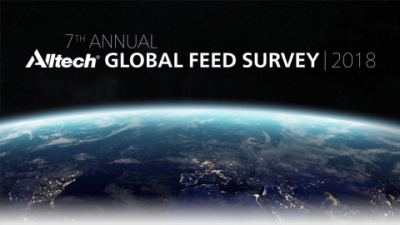 China and the U.S. produce one-third of the global feed supply

[LEXINGTON, Ky.] – The 2018 Alltech Global Feed Survey, released today, estimates that international feed tonnage has exceeded 1 billion metric tons for the second consecutive year, with a total of 1.07 billion metric tons of feed produced in 2017. The growth seen in 2017 was strong at 2.57 percent over last year. The feed industry, valued at $430 billion, has seen 13 percent growth over the past five years, equating to an average of 2.49 percent per annum. This substantial growth is supported by the higher reported consumption of meat, milk and eggs.

The seventh edition of the annual survey is the most comprehensive ever, now covering 144 countries and more than 30,000 feed mills. The results show that China and the U.S. remain the top two countries, producing one-third of all animal feed, and that predominant growth came from the pig, broiler and dairy feed sectors as well as the European and Asia-Pacific regions.

“Now in its seventh year of analysis, the Alltech Global Feed Survey continues to serve as a valuable report on the state of the global feed industry,” said Aidan Connolly, chief innovation officer and vice president of corporate accounts at Alltech. “In addition to its insights into the feed industry, it serves as a barometer for agriculture as a whole and oftentimes demonstrates the economic strength of the countries included in the survey.”

The Alltech Global Feed Survey assesses compound feed production and prices through information collected by Alltech’s global sales team and in partnership with local feed associations in the last quarter of 2017. It is intended to serve as an information resource for policymakers, decision-makers and industry stakeholders.

·       North America: The U.S. remains the second-largest feed-producing country globally, behind China. North America produces a third of the beef feed, five times that of the next-largest producer. The U.S. and Canada are two of the top horse feed producing countries. Feed prices in North America are lower than when compared to other regions.

·       Africa: Africa remains the fastest growing region in the world for dairy and broiler feeds.  With a regional average growth rate of nearly 30 percent over the last five years, it did not show growth in 2017. Pig, dairy, layer and boiler feed production increased, while decreases occurred in beef and aquaculture. Also, on average, Africa is the most expensive region for feeding pigs, layers and broilers. Smaller countries such as Botswana and Mozambique led the growth for pig, dairy, layer and broiler feeds. Beef feed production decreases were reflected in countries such as Zambia and Morocco. While many African nations showed a small increase in aquaculture feed production, the region as a whole was down primarily because of lower reported feed production in Egypt, which has now been surpassed by Nigeria.

·       In the poultry industry, broiler feed production increased across all regions, with the largest growth found in Africa with 10 percent and Europe with 7 percent. Romania, Russia and Ukraine all reported steady growth, contributing to Europe’s overall production, while Africa’s growth came primarily from Egypt, Uganda and Mozambique.

·       Beef feed production reported an overall global decline of approximately 1 percent, primarily in regions such as Latin America, Africa and Europe. This global downward trend has generally been felt by the industry for some time as more consumers turn to “white” meats such as chicken, pork and fish.

·       Overall aquaculture feeds showed a slight increase, particularly in the European region. China reported a decline of 5 percent this year and in 2016, which could be linked to government controls on feeding practices and food safety, such as the administration of antibiotics. Brazil, Chile and Peru led the increase in production in Latin America, as did in the Middle East. Carp leads the production of aquaculture feed, followed by shrimp/prawn and tilapia. Catfish, salmon and trout also ranked on the species feed indicator, though to lesser degrees.

·       The pet food sector had a strong year across all regions. Asia-Pacific’s pet food production increased by 13 percent, with China, Thailand and Taiwan as the primary contributors to the increase. Europe increased by 17 percent with Russia, the Czech Republic, Romania, Poland and Hungary producing over 580,000 metric tons of additional pet food. Uruguay, Ecuador, El Salvador, Chile and Argentina represent almost all of the pet food production growth in Latin America, combining for 725,000 more tons.

“The Alltech Global Feed Survey provides valuable data and insights on the health of the feed industry and agriculture as a whole,” said Connolly. “As such, we will continue to offer the findings of the feed survey freely in an effort to demonstrate the significance of the animal feed industry in feeding a growing global population, sustainably and affordably.”