Farming for the future: How one Irish dairyman is working to protect the planet

The Atlantic Ocean has long inspired adventures and expeditions in search of a brighter tomorrow.

It has been the playground of many historic pioneers, who ventured into the great unknown with no idea where they would weigh anchor. Standing at the edge of this vast body of water is Ronan Síochru’s (Shuck-roo) family farm,

Meet Ronan - Dairy Farming on the Edge of the Atlantic

Dingle Holsteins, which Ronan himself is on a quest to make more efficient and sustainable by reducing the environmental impact of cattle.

That’s no exaggeration: The Síochrus’ land rests in the village of Burnham on the Dingle Peninsula at the very southwest tip of Ireland, with the town of Dingle to the east and the ocean to the west. The region’s misty skies and craggy hillsides evoke a sense of otherworldliness — one that millions of people encountered when the nearby Skellig Michael island served as an iconic setting in the most recent “Star Wars” films.

“It’s a really nice part of the world,” Ronan said. “There’s no place else we’d rather be farming.”

Ronan is among the fourth generation of his family to farm on this land, where he grew up understanding that farming is a group effort.

“The term ‘family farm’ was certainly the case,” he said. “We were all expected to pull our weight. It just instills this work ethic in people, you know — you just have this drive to make your family and make the farm better.”

Just as he cherishes his agrarian heritage, Ronan is also proud of his heritage as an Irishman — specifically as one of the 39% of Irish citizens who speak the Irish language (and the 4% who speak it on a daily basis, according to the 2016 Irish census). It helps that the Dingle Peninsula is one of the few remaining Gaeltachts (Gwail-tock-t; a predominantly Irish-language-speaking area) in the country.

“We just grew up with Irish,” Ronan said. “I suppose I can thank my grandfather; he taught us all Irish when we were young. We’re proud that we speak Irish. It’s part of our identity.” 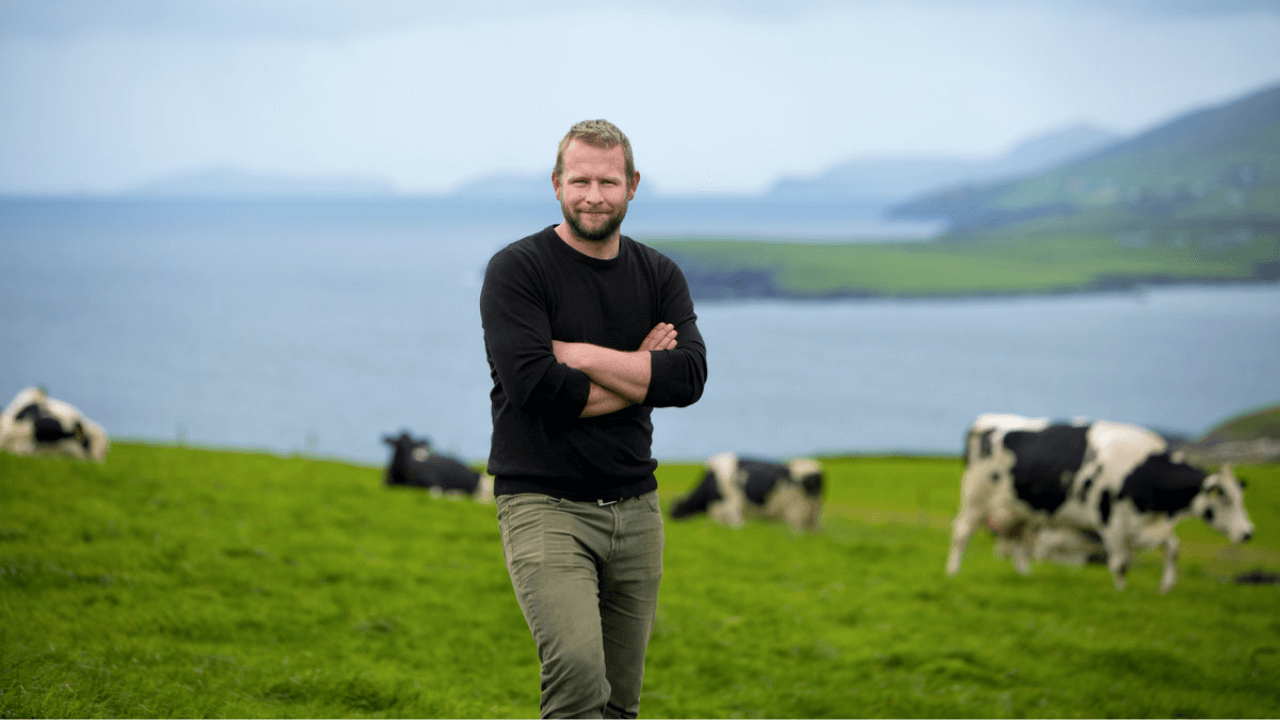 Return of the farmer

Despite the fact that agriculture had been part of Ronan’s life from a young age, he did not originally plan to join the dairy industry, striking out instead for London at the age of 19. However, after three years, he felt himself being called back to Burnham.

“Like most fellows my age at the time, I suppose we (thought) were meant to get away from home,” Ronan said. “It took me going away to realize that I did want to farm full time.”

Since returning to the family farm in 2014, Ronan has grown the operation significantly, transforming it from a 60-animal suckler herd (or cow-calf operation) to a dairy farm with 85 pedigree Holsteins. Ronan and his family are proud of the milk they produce — and of where it will eventually end up.

“The majority of our milk will go to cheese, butter or infant formula,” he said. “We take extra pride in that we’re producing a very high-standard product. And the product we’re producing is traveling — it’s a worldwide product. (We have) a reputation to uphold.”

Partnering up for the good of the planet 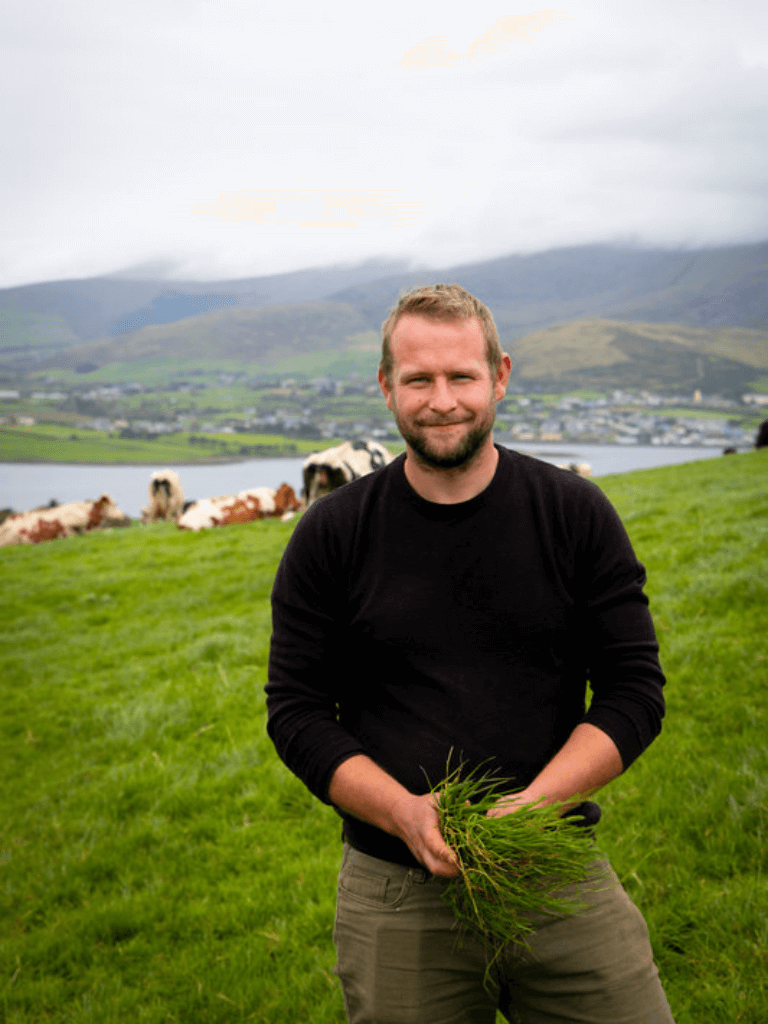 In the years following his return to farming, Ronan has made significant improvements to his family’s operation as part of his commitment to sustainable dairy farming.

“We’ve invested heavily in the farm and in the future of the farm,” he said. “Whether it’s the production or the quality of the soil, the yard, there’s always something to improve. I’m just trying to make the farm better.”

The farm currently includes 10 acres of woodland, and Ronan hopes to expand that woodland in the future to serve as a haven for wildlife and to potentially offset some of the emissions naturally produced by dairy farms. Being environmentally friendly is important to the Síochru family.

“We’re just trying to farm in the most sustainable way possible,” Ronan said.

In 2018, Ronan entered a partnership that has allowed him to take his sustainability efforts to new heights. Alltech, a global animal nutrition company, reached out with an interest in helping him on his quest toward greater sustainability.

“I was delighted to be asked,” he said.

Along with other industry partners, Alltech Ireland is working to help Ronan and dairy farmers like him gauge the efficiency of their farms and implement new measures and techniques to improve that efficiency, thereby establishing more profitable and sustainable production. To achieve this goal, Alltech Ireland representatives visited Ronan’s farm and deployed several assessment tools that provide farmers with important metrics and information. Those tools included:

Over the course of the past year, Ronan has utilized these resources to make “some big improvements here on the farm,” he said, adding, “Not only have I reduced my carbon footprint on the farm, but I’ve also become more profitable.”

As he mentioned, the farm’s carbon footprint has decreased by a significant 30% — which, in terms of the greenhouse gases that are no longer being emitted by the farm, is equivalent to taking 167 cars off of the road or cancelling 47 around-the-world flights. The rumen function of the herd has also improved, leading to higher percentages of milk solids produced.

Ronan credits an increased feed efficiency as the cause behind these environmental and operational achievements.

That may be an understatement: To achieve this increased efficiency, Ronan strove to improve the quality of the forage by improving the protein levels of the homegrown silage, diminishing the need to supplement protein from outside forages or with soybeans. He also paid more attention to the cows’ BCS and took measures to strengthen the quality of the farm’s grass and encourage it to grow.

Even with all of these great results, Ronan refuses to rest on his laurels, already thinking about what more could be done.

“I think there’s still a lot of gains to be made here on the farm,” Ronan said. “(There’s) a lot learned, but a lot left to learn.”

Feeding the world from the Irish coast

What all of these improvements really add up to is an even greater ability to provide food to the global population and, in the process, create a Planet of PlentyTM — which both Alltech and Ronan are committed to doing.

“The population of the world is increasing at a rapid rate, and people will have to be fed, and that’s our responsibility: to feed the world,” he said.

That responsibility might weigh heavily on the shoulders of some, but Ronan and the rest of the Síochru family take it on with pride and incorporate it into the everyday activities of the farm.

“It’s always constantly on our minds,” Ronan said of sustainability and the environment. “In any management decisions that we make here on the farm, all those things are in the back of our mind.”

With three generations of Síochrus having worked this land before him, Ronan deeply understands the importance of taking care of the land as long as it is in his hands — and he hopes to pass this charge on to another Síochru in the future.

“As landowners, we have responsibility to the land, to the generations gone by and the generations ahead,” he said. “Our aim is to farm in a sustainable way so we can pass on the farm to the next generation, in good condition.”

Taking in the vista from the vantage point of Dingle Holsteins — from Dingle town to the bay to the ocean beyond — makes it all too obvious why Ronan cares about protecting the Earth.

“It’s a really beautiful part of the world,” he said, “and we’re trying to look after it as best we can.”