Tanzania’s seaweed economy: Listen to women, save the world

On the Tanzanian coast, in the warm waters of the Indian ocean, you’ll see a sight with the potential to save the world.
Image 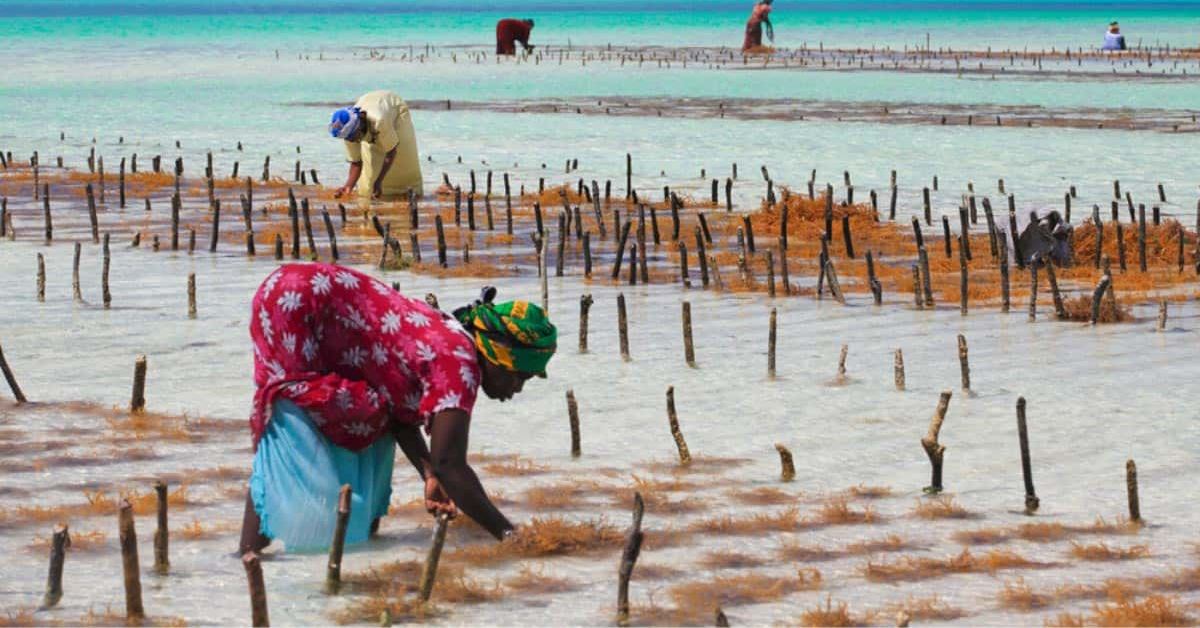 Rows of sticks, embedded in the sand, rise above the shallow coastal waters. Fuzzy green lines are visible under the clear water between the sticks. Welcome to Tanzania’s seaweed farms: an international and sustainable economic force, a valuable food source, and a potential weapon against climate change, all powered by local Tanzanian women farmers.

This blue seaweed economy is a rare triple-threat: a win for women, a win for the planet, and a win for sustainable economic development. And it could all be brought down by climate change if those in power don’t take the lead of the women who know this delicate industry best.

Seaweed is a new superfood—and demand is rising. In addition to being used as an ingredient, it can be processed for use in countless food additives, pharmaceuticals, and cosmetic products.

“You might not know you’re consuming seaweed, but you are,” said Dr. Betsy Beymer-Farris, Director of the Environmental and Sustainability Studies Program at the University of Kentucky. “Check your chocolate milk and you’ll see something called carrageenan in it. It comes from seaweed that is farmed along the coast of Tanzania by women.”

Other uses for seaweed:

Seaweed uses go far beyond chocolate milk. The first new Alzheimer’s drug in 17 years, recently approved for use in China, is seaweed-based. And it has the potential to sequester carbon—meaning it can be a weapon in our global fight against climate change.

Seaweed can absorb and store carbon that would otherwise be absorbed by the ocean, which has led to increased ocean acidification and subsequent disastrous effects on coral reefs. When that carbon is absorbed by growing seaweed, however, it can be safely stored as the plant rapidly grows—and the potential is limitless.

“If we decide to farm 10% of the ocean in seaweed, we can safely store up to 40 gigatons of carbon dioxide per year,” said Dr. Beymer-Farris at the 2020 Alltech ONE Conference. “That’s the equivalent of what the entire world emits on a yearly basis.”

As seaweed grows, it provides an important habitat for fish and other aquatic species. And the climate-friendly effects don’t stop after it’s harvested: cows fed a seaweed additive belched 58% less methane—a greenhouse gas many times more powerful than carbon dioxide.

With so many uses and benefits, it’s no wonder that seaweed farming is a rapidly-growing $6 billion business, projected to top $9 billion by 2024. And in Tanzania, the main drivers of that business are the female farmers who know seaweed, and the conditions it thrives in, better than anyone.

The women’s work of farming seaweed

Some 70% of Tanzanian seaweed farmers are women, and they’ve been farming seaweed off the Tanzanian coast for decades. The area is one the top seaweed producers in the world, making the crop a powerful source of financial stability for women farmers and their families. While Tanzanian men head out to deeper waters to fish, Tanzanian women are expected to stay closer to home—making the intertidal zones of the seaweed farms their domain.

That’s how Tanzania’s women seaweed farmers started noticing that the sea level in their shallow-water seaweed farms was dropping, even as global sea levels were rising. The initial reaction of scientists was disbelief and shock.

“When I was doing research with these women in coastal Tanzania, they kept telling me the sea level was falling,” said Dr. Beymer-Farris. “And I responded by saying, ‘That’s impossible. There’s sea level rise happening as a result of climate change.’ So we took women’s ecological knowledge and we compared it to the academic literature by geomorphologists and geologists, looking at sea level rise. And what we found is that along the coast of Tanzania, the sea level actually is falling because of plate tectonic activity on the East African Rift Valley. There’s continental uplift happening, causing the sea level to fall.”

Those falling sea levels and subsequent rising temperatures mean that the farmers are no longer able to grow a specific species of seaweed, Kappaphycus alvarezii, more commonly commercially known as cottonii. Lacking access to boats to farm the species in deeper, cooler waters, Tanzania’s women farmers are missing out on a major income source, as cottonii is more valuable on the world market. Its loss is a major blow for these farmers. And to make it worse, since women lack representation in local village governments, no one is listening to them about it.

Those ill-conceived policies have included $8 million spent on seawalls to protect wealthy cities like Dar es Salaam from rising sea levels. Without women’s representation in local village governments, the knowledge that sea levels are, in fact, falling on Tanzania’s coast was not communicated. The result: Tanzania spent millions on a solution that fit the global narrative about climate change, but missed the situation on their own coast.

Listening to women, saving the world

Could the voices of these women farmers unlock the potential for a Planet of Plenty? Could we fight climate change through the seaweed economy in Tanzania?

In short: we could make a start. If we helped empower female representation in all levels of Tanzanian government and listened closely to the women farmers witnessing falling sea levels, economic investments could be made in ways that make sense for the local climate and local economy. We could provide women farmers with boats and swim training to help expand their seaweed farming to deeper waters. That access would allow them to carry on an ecologically sustainable industry and a lucrative source of economic growth that could benefit them, their families and their community.

With additional resources, these farmers could expand their operations even further into the ocean, creating a massive, sustainable carbon sequestration operation that also provides a multitude of other benefits: valuable habitats for ocean wildlife, a valuable food source, and a valuable commodity on the world market. Together, we have the power to help provide that win-win-win: for women, for the planet, and for sustainable economic development—all through Tanzanian seaweed, and the Tanzanian women who know it best.