Antimicrobial resistance, or AMR, in agriculture can negatively impact public health, with an ever-increasing rise in bacterial strains that are less and less sensitive to treatments.

Antimicrobial resistance has the potential to become one of the greatest problems of our generation. Each year, 700,000 people die of AMR. Without action, the death toll could rise even higher, to as many as 10 million deaths annually by 2050, and cause a 3.8% reduction in annual gross domestic product, according to the 2017 report “Drug-Resistant Infections: A Threat to Our Economic Future.” The world’s poorest people — those living in low- and middle-income countries — are disproportionately vulnerable. 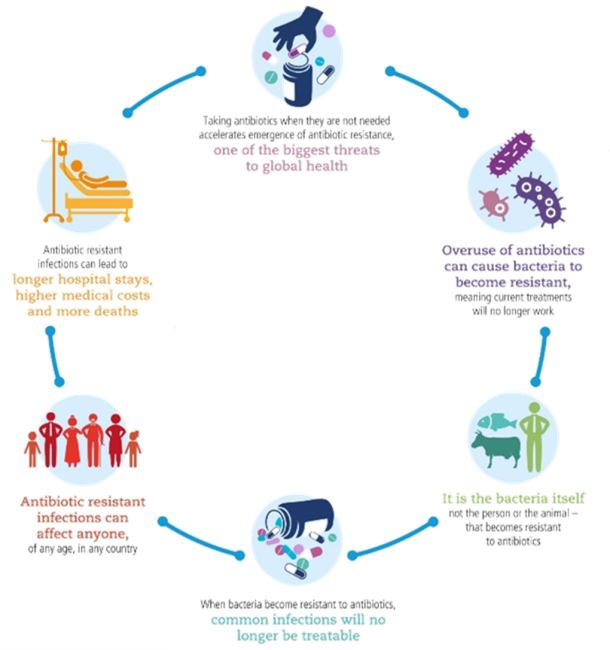 In fact, all the antibiotics brought to the market in the past 30 years have been variations of existing drugs discovered in 1984. Most worryingly, it was as long ago as 1962 that the last new class of antibiotics to treat those infected by the most resistant gram-negative superbugs was discovered.

Treatment of animals with antimicrobials can cause drug resistance to zoonotic pathogens (e.g., Salmonella, Campylobacter) that can be transmitted to humans. Bacteria from animals can be spread to food products during slaughter and processing, and this spread has been extensively documented for conventional foodborne pathogens such as Salmonella, Campylobacter and E. coli.

Each year, the European Centre for Disease Prevention and Control (ECDC) and European Food Safety Authority (EFSA) produce a summary report on antimicrobial resistance in zoonotic and indicator bacteria from humans, animals and food. Such data reveals interesting insights and highlights the occurrence of resistance to commonly used antimicrobials in veterinary medicine in carcasses of food-producing animals.

Likewise, in relation to recent information on resistance to fluoroquinolones, which are the highest priority CIAs in human medicine, it is of even greater concern given that their use in food-producing animals is subject to prudent use initiatives. The report for 2018/2019 indicates that among Salmonella spp. recovered from broiler (poultry produced for meat) carcasses, resistance to the fluoroquinolone antimicrobial agents ciprofloxacin and nalidixic acid was reported at high to extremely high levels in many member states in the EU, with overall resistance at 51.4% and 48.8%, respectively.

Other trends indicate that the relative resistance rates for S. typhimurium remain static, but this should still be a concern due to the relatively high rates noted. The majority of antibiotic resistance can be seen among broilers, and this may, in part, be due to the lower level of antibiotic use in the layer (egg producing) industry relative to the broiler market.

The data further indicates a high level of antibiotic resistance amongst isolates of Campylobacter, with high to extremely high levels of resistance to antimicrobials such as ciprofloxacin, nalidixic acid and tetracycline being noted in meat samples of broilers. Of particular interest is the high rate of resistance to CIA antibiotics, such as fluoroquinolones in C. jejuni and C. coli in broiler meat.

There is a global movement (Figure 1) to reduce antimicrobial use in livestock production. Antimicrobials have historically been, and are still, used extensively to address gut health issues, and a major challenge is finding alternatives to antimicrobials in order to support the gut during the period when it is developing.

Figure 1: There are growing concerns about using antibiotics in feed, but a global movement is underway to reduce antimicrobials in livestock production. Note: AGP stands for antibiotic growth promoters.

While the debate continues over what is driving the seemingly inexorable rise of antibiotic-resistant microbes, alternatives to antibiotics and products capable of reducing the risk of antibiotic resistance transfer through the food chain are clearly required.

Globally, it is recognized that there is no so-called “silver bullet” to replace antibiotic use in animal production, and producers will almost certainly have to improve hygiene and husbandry to address the issue.

Products that will assist the move to antibiotic-free production status include many that are designed to regulate and support the gut environment and its microflora, such as:

Of the functional ingredients currently in use for microbial control, mannan-oligosaccharides (MOS) are widely used in animal nutrition and have been shown to improve animal performance in a manner similar to antibiotic-like growth promoters. Having been commercially available since their launch in the early 1990s, a substantial body of scientiﬁc papers and practical examples of MOS efﬁcacy has been generated. Since 1999, the use of MOS in animal feed has become more prominent, mainly due to the European ban on prophylactic antibiotic growth promoters in animal feed. Given their ability to bind and limit the colonization of gut pathogens, MOS has proven to be an effective solution for pathogen control, as well as supporting overall health and performance.

While the early use of yeast mannan products was linked with control of pathogens such as Salmonella and E. coli, further refinements of yeast MOS have led to the isolation of a mannose-rich fraction (MRF) with enhanced benefits for intestinal health.

Recent studies on MRF have focused on the impact that these more refined carbohydrate fractions have on the overall bacterial community of the poultry gut. Such work has shown that MRF supplementation of poultry diets can significantly enhance the diversity of the intestinal microflora (also called microbiome), and in doing so, decrease the prevalence of microbial pathogens, such as Campylobacter, which are of interest to human health.

In terms of developing strategies to reduce or limit the use of antibiotics, an elegant solution is to find ways to make the therapeutics more effective. MRF supplementation of the diets of broilers has been associated with a decrease in selected antibiotic resistance gene copy number. This is potentially linked to the ability of MRF to reduce plasmid transfer between microbes (Figure 2), and in doing so, prevent the spread of antimicrobial resistance. 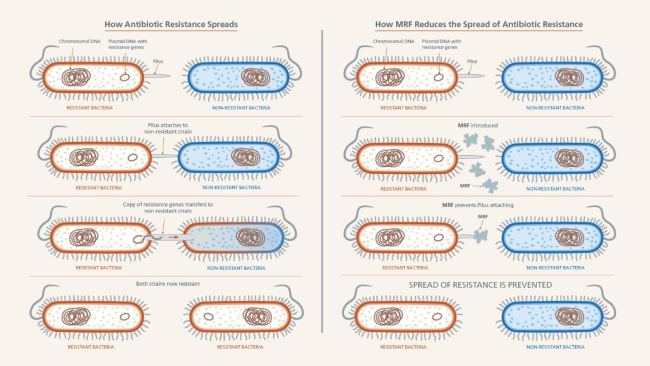 As part of ongoing efforts to support restriction and non-therapeutic use of antimicrobials in the poultry and pig industries, recent research at Alltech has focused on the mechanisms surrounding antimicrobial resistance and its impacts on antimicrobial efficacy toward common pathogens, such as resistant E. coli. Newly published research from the team at the Alltech European Bioscience Centre in Dunboyne, Ireland, has shown that MRF can influence bacterial metabolism, and in doing so, influence the sensitivity of resistant bacteria to antibiotics. This research demonstrates that when resistant E. coli is grown in the presence of MRF, its growth and metabolism are altered, resulting in antimicrobial-resistant strains becoming increasingly sensitive to antibiotic treatment. The use of MRF in this instance has been shown to enhance the sensitivity of bacteria to the effects of antibiotics.

Antimicrobial agents are essential for food security. Global consumption of antimicrobials in food/animal production was estimated to be 63,000 tonnes in 2010 and is projected to rise by 70% by 2030. Doubling agricultural productivity while reducing antimicrobial use is a challenge. However, programs that employ a holistic approach to health management have proven to be extremely effective. By utilizing a combination of strategies, producers can rehabilitate and accelerate the evolution of the intestinal microbiota. The success of these programs, such as Alltech Seed, Feed and Weed program, is reliant on first seeding the gut with favorable microflora using a probiotic; feeding the favorable microbes through acids or enzymes; and, finally, weeding out pathogens by using MRF products.