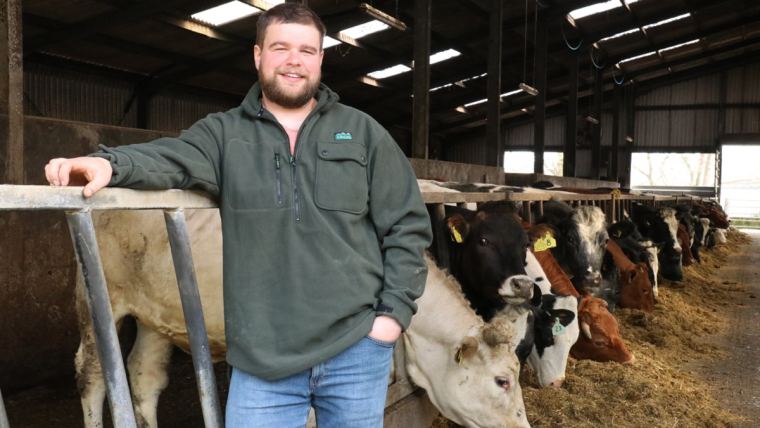 ​Mark Evans farms in partnership with his sons, Rhodri (pictured above) and Steffan, at Home Farm near Fishguard where, as well as finishing 200 commercial beef animals each year, they also run the Sarahlou herd of pedigree Limousins.

“Whilst simple and easy to oversee, it was a very labour intensive and, at times, demoralising routine, with the delivery of more than 100 buckets of cake taking in excess of an hour every day,” Rhodri explains. “We knew we wanted to make some improvements and were having our grass silage analysed fairly frequently, but we didn’t really have the option to adjust the ration should the analysis tell us something untoward.”

To improve the herd’s diet, the Evans drilled their first crops of home-grown maize (22 acres) and spring barley (30 acres) in 2020.

“We’d purchased a lot of straw the previous year, which, given the rising price of most inputs, was getting too expensive to be sustainable,” Rhodri continues. “We therefore decided to grow our own barley and maize to reduce our exposure to further price increases. The only problem was, we had no way of incorporating either crop into the ration.”

Knowing they needed to invest in a TMR diet feeder, but unsure which make, model or type to choose or how they were going to afford it, they spoke to Ross Gibbon, KEENAN’s regional business manager for Wales and the West Midlands, to discuss the merits of purchasing a second-hand machine.

“Ross came out to the farm to find out a little more about what we were trying to achieve and to carry out a site survey to ensure he could recommend a machine which would suit our infrastructure,” Rhodri continues. “We subsequently bought a factory refurbished KEENAN Approved-used MechFiber340 paddle feeder which we took delivery of in August 2020.” 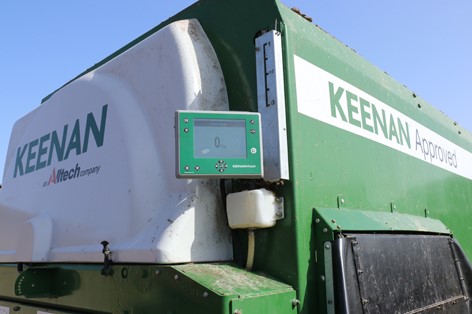 The refurbished diet feeder is equipped with an Alltech ‘InTouch’ controller which not only enables Rhodri to weigh out each ingredient accurately, but also controls how long the ration is mixed for. It also sends all the relevant ration and mixing data wirelessly to Rhodri’s computer and smartphone, and to Imogen Ward, his designated Alltech InTouch feeding specialist, who analyses the data and provides feedback to improve the herd’s performance. The data from the controller is also sent to Alltech’s InTouch nutrition centre in Ireland where it is analysed to ensure the machine is operating correctly and to ensure there are no obvious errors in the ration’s formulation. 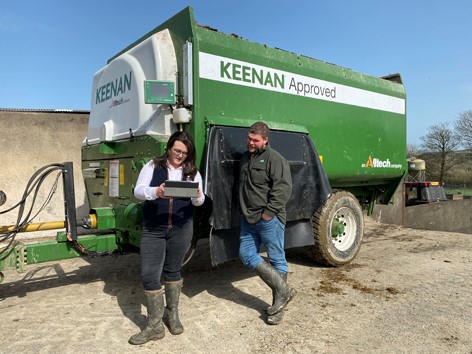 “It’s a bit like having someone looking over your shoulder making sure you’re doing your job properly,” Rhodri admits, “but it’s also very comforting to know that there’s a wider team of specialists looking at the herd’s feed intake and making sure we’re using the machine as effectively as possible.”

Rhodri receives a weekly feeding accuracy report which highlights if any groups of cattle have been under or over-fed a specific ingredient and whether each load was mixed correctly, whilst continuously monitoring feed costs.

“It’s akin to a precision farming system for feeding beef cattle,” Rhodri explains. “I also send my silage analysis results and daily live weight gain figures to Imogen so that she can advise if I need to adjust any of the herd’s rations. She also processes our feed out and finished weight data to analyse how the herd is performing and if the rations we’re feeding are delivering the desired effect.” 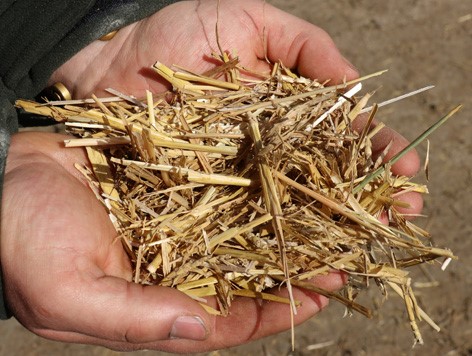 As well as feeding the cattle on a daily basis, the machine is also used to process straw: “The first time we put the machine through its paces was when we were processing our first crop of barley straw,” Rhodri describes. “We have chopped approximately 100 straw bales through the machine this winter and it performed faultlessly, creating a consistent chop length which accurately matched the muzzle width of the animals being fed.”

As for the new ration and feeding regime, the results speak for themselves: “The daily feeding out routine actually takes slightly longer than it used to,” Rhodri describes, “but that’s because we’re now feeding a more complex ration and paying more attention to the way the ration is formulated, mixed and delivered.”

Each group receives its own specific ration according to animal age and weight (see panel below), with each ration so consistently mixed that there’s now very little waste because any selective eating of individual ingredients has been eradicated.

“The cows are all so content that our biggest problem is getting them to leave the feed barrier when we need to work around them,” Rhodri continues.

“The last two batches of steers we sold finished a month sooner at around 700kg, achieving an average daily liveweight gain of 1.39kg. They also scored one grade higher than usual, moving up from an ‘O’ to an ‘R’ which meant we received an extra £0.15 per kilo.”

Heifers have also finished marginally younger averaging 25 months of age and achieving 630kg compared to 600kg. They have also climbed up a grade. 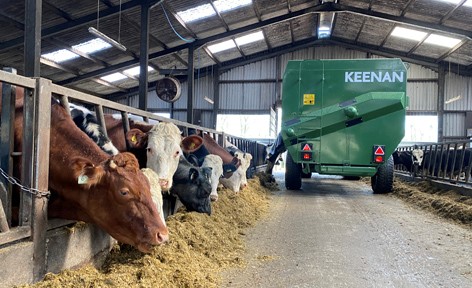 “We’re using more feed and spending more money as a result, but the marginal gains we’ve made since introducing the KEENAN have resulted in each animal spending less time on the farm and being worth more at slaughter which means, overall, we’re operating much more profitably.

“With feed and other input prices constantly on the rise, it simply isn’t viable to have animals on the farm if they aren’t performing. The KEENAN machine and InTouch system enable us to fine tune what we’re doing and to maximise the herd’s performance throughout the year.

“Adopting this level of precision has also made our day-to-day routines more enjoyable and we can physically see the improvement in the cattle which is a huge motivation, especially during the long, cold winter months.”