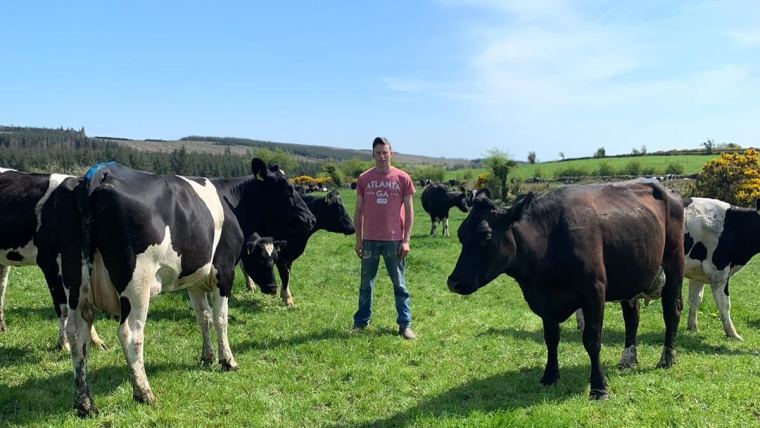 These unprecedented times present new challenges for farmers. Restrictions of farm visits mean that it is harder for farmers to access the support they need to make the best of their production.

But help is still at hand. KEENAN, along with InTouch nutritionists, continue to work remotely, providing support and on-farm results for customers. In this challenging period, we are inviting new and existing customers to take part in our Proven Results Programme.

Aaron Holden milks 120 British Friesian cows in a spring calving, grass-based system outside Piltown, Co. Kilkenny. Taking over the farm aged 18, after the passing of his father, Aaron has made significant strides toward a successful operation. He has doubled cow numbers and, in 2015, built a new milking parlour. When taking up the reins, Aaron identified improvements he wanted to make. One was to introduce a diet feeder — something he had never used before.

“My father used to dream about buying a KEENAN,” explained Aaron. “On the way home from the ploughing last year, I passed by the factory in Borris, and I said to myself, ‘I’m going to buy one of those’.”

“Mark called out the first day and helped to get me set up,” Aaron said. “He looked at the cows and tested the silage. I’ve had two more visits since then, and he’s always at the end of the phone if I have any questions.”

Mark told Aaron that by implementing the Proven Results Programme he could:

This has provided great results. Most notably, Aaron is impressed with the success of the transition period and improved performance in early lactation.

“All in all, the calving season went very well,” admitted Aaron. “The cows were in great order and calved down brilliantly. They also got going a lot quicker after calving as well. They have never been milking as well.”

Chris Catherwood farms in partnership with John and Jason Rankin, outside Newtownards in Co. Down. They milk 265 Holstein cows in a spring calving system. It is a shared milking arrangement, with Chris acting as farm manager.

Chris was crowned the 2018 Northern Ireland, Young Farmer of the Year. But along with this success, the Carrowdore native also faced challenges on-farm.

“We were very low on winter feed due to the drought conditions across the country in 2018,” explained Chris.

Chris began looking into diet feeding, leading him to begin working with KEENAN.

After contacting his KEENAN regional business manager, Gareth McAllister, Chris availed of the three-month rental scheme KEENAN was offering at the time. Seeing the benefits, Chris purchased a KEENAN MechFiber360 the following year.

While initially purchasing the machine to improve the farm’s adaptability after the drought, after speaking with Gareth, Chris identified other areas he wanted to address with KEENAN’s help, such as:

Since purchasing his KEENAN machine, Chris has seen significant improvements in key areas of his farm business.

“We saw a massive saving in silage tonnage (300 tonnes) used by incorporating straw into the dry cow diet,” said Chris. “This allowed us to not only save silage (1 kg of straw saved 5 kg of silage) but also improve cow body condition. Cows have calved down extremely well and intakes within the first 30 days of calving have increased rapidly”.

“The increase in milk production from this has been incredible,” Chris added. “Cows are currently averaging 30.5 L/day out at grass, night and day, only being buffer-fed TMR for a short time after each milking.”

The KEENAN Proven Results Programme is available to both new and existing customers. Contact your KEENAN regional business manager today for a free remote farm assessment. Take a look at some of our models in our new virtual showroom.