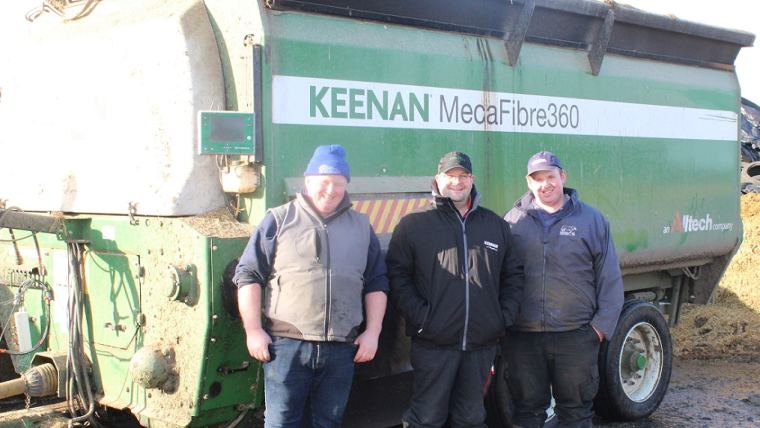 Saving time, creating a good quality TMR ration and improving milk quality were some of the challenges Jeremy O’Toole successfully tackled last year. Jeremy runs a 40/60 autumn/spring calving herd with 230 cows in Tullow, Co. Carlow. He plans on reducing cow numbers to between 170–180 in a bid to reduce his heavy workload and achieve a better work/life balance.

One way of achieving time savings was by replacing his second-hand MechFiber340 with a larger KEENAN MechFiber360.

“This is the best machine we have had so far,” says Jeremy. The bigger machine doesn’t only reduce feeding time; it also creates a better mix. A higher capacity machine offers more room in the mixing chamber to create an even and consistent mix that’s light and fluffy. Jeremy remarked that they saw an improvement within the mix itself — the smaller machine was overloaded, negatively impacting the mix quality.

With the improved mix quality produced by the bigger machine, Jeremy saw a subsequent improvement in milk quality — yield and solids — and, most noticeably for him, herd health.

“We had no milk fever since early 2017 and very few occurrences of holding the afterbirth,” explains Jeremy. He attributes this to the combination of the KEENAN machine and the InTouch nutrition support.

Regular maintenance of the machine is something Jeremy takes seriously — every fortnight the machine will be greased, and the oil is topped up. “We want to prevent a machine break-down. Cows are fed every day. We can’t afford to have the machine stop.” Once a year, Martin Nolan, KEENAN service engineer for the South East, services the machine and gives it a full 40+ machine check-up.

The main reason Jeremy gets a regular service is to avoid downtime. Martin Nolan is also available anytime, should something go wrong during feeding season. At the yearly service, Martin flags any parts that need attention or replacing.

To make it even easier to achieve a good quality mix, Jeremy will be adding an AutoStop at the next service appointment. The AutoStop switches the PTO off, avoiding overmixing of the ration.

Jeremy summarises that “the machine does run better when a service is done.”