When Dr. Pearse Lyons turned his extensive experience of fermentation to the issue of improving rumen fermentation, he did what all great scientists do: He began by identifying the core causes of inefficient rumen function in beef cattle. His solution was to develop the rumen-specific yeast culture Yea-Sacc.

An efficient rumen must do two things. First, it has to digest as much of the total feed intake as possible. However, the bacteria responsible for this can often be hindered by the presence of air. Second, the rumen must prevent any build-up of acid, leading to acidosis, caused by excess sugar coming from the concentrate part of the diet and some high-sugar grasses. To ensure efficient rumen fermentation, these issues need to be addressed at the same time. This is what makes Yea-Sacc unique; many products can do one or the other, but Yea-Sacc is the only product repeatedly proven to do both simultaneously.

The use of yeast culture in beef cattle for fattening is strictly controlled by the European Food Safety Authority (EFSA). For any company to legally sell a product, they must first supply results of repeated animal trials from different authorised research centres, showing significant animal response in at least three studies. These studies, some of which are conducted by Teagasc Grange, are published and independently evaluated. It is completely transparent for all to see, and in all situations, Yea-Sacc consistently delivers the greatest improvements. In fact, Yea-Sacc is so well researched that today it accounts for approximately 70% of all the yeast culture research worldwide. Interestingly, in its 35 years on the market, Yea-Sacc has never received a negative response in any research project. It is this consistency of response that has become its byword.

In recent months, the Carbon Trust has awarded accreditation to Yea-Sacc for its ability to reduce the carbon footprint of dairy and beef operations. It is the only yeast culture on the market to achieve this recognition.

A major strength of Yea-Sacc is the amount of supporting animal trial research that is conducted at a local level. This controlled research centre work has all been supported by successful large commercial farm trials

In Ireland, repeated studies have been conducted in beef fattening. The Teagasc Grange research facility has produced numerous Yea-Sacc studies showing increased liveweight gain and feed efficiency, many of which were used in the European authorisation process.

Likewise, in the U.K., Harper Adams University has conducted and published trials on beef showing faster growth rates coupled with improved feed efficiency, resulting in animals going to slaughter three weeks earlier. Previous work in the U.K., at the University of Aberdeen and the Rowett Institute, was also central in lifting Yea-Sacc to its present leading position.

Different yeasts, different results; never truer than with Yea-Sacc. It is consistently the highest performer on the market. Dr. Lyons got it right first time; by addressing the dual problems of the rumen simultaneously you get the best possible, value-for-money results. 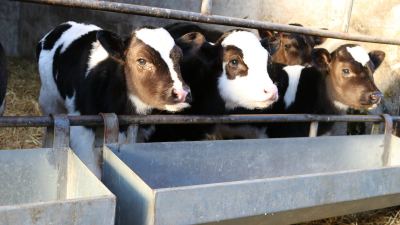 Snowy stress: Ensure your calves stay warm and maintain growth in wintry we...

Storm Ciara has hit Ireland. Temperatures have plummeted, and snowmen are popping up around the countryside. No matter where in the world you might be having a snow day, looking after calves properly in a winter wonderland will ensure growth rates do not decline. Remember: The heifer calf is the future of the dairy herd and will determine the...

Getting more from your feed

So far, 2019 has been one of the toughest years imaginable for all beef farmers. We have witnessed many upsets caused by poor beef prices, increased costs of feed, Brexit and, most recently, the threat of Mercosur. A question I have been asked a lot recently is “What is the future of finishing animals in this country?” It is crucial that...

10 steps to gain more from the same

With feed costs for finishing cattle representing the biggest cost on farms, the challenge — as ever — is to maximise liveweight gain from the feed purchased and made on-farm. As a result of this performance increase, cattle finish quicker and spend fewer days on-farm, leading to a reduced feed bill. To assist with this challenge, Alltech...