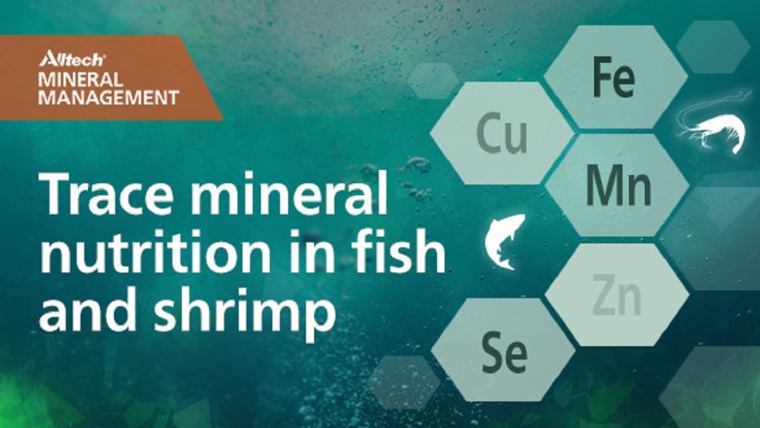 Aquaculture is one of the fastest growing agricultural industries, particularly in Asia. Nutrition, specifically trace minerals, is just one of several key aspects that one must consider in successful, profitable, and sustainable farm management.

Trace minerals, which are required in ‘trace’ amounts, are essential elements that have roles in several physiological and metabolic processes in fish and shrimp. Of particular importance are copper (Cu), iron (Fe), manganese (Mn), zinc (Zn) and selenium (Se), which all contribute to maintaining health, fertility, and immunity, as well as improving growth rate and feed efficiency. A summary of the specific functions of these trace minerals is provided in figure 1.

Figure 1: Key trace minerals and their physiological and metabolic benefits in aquatic species 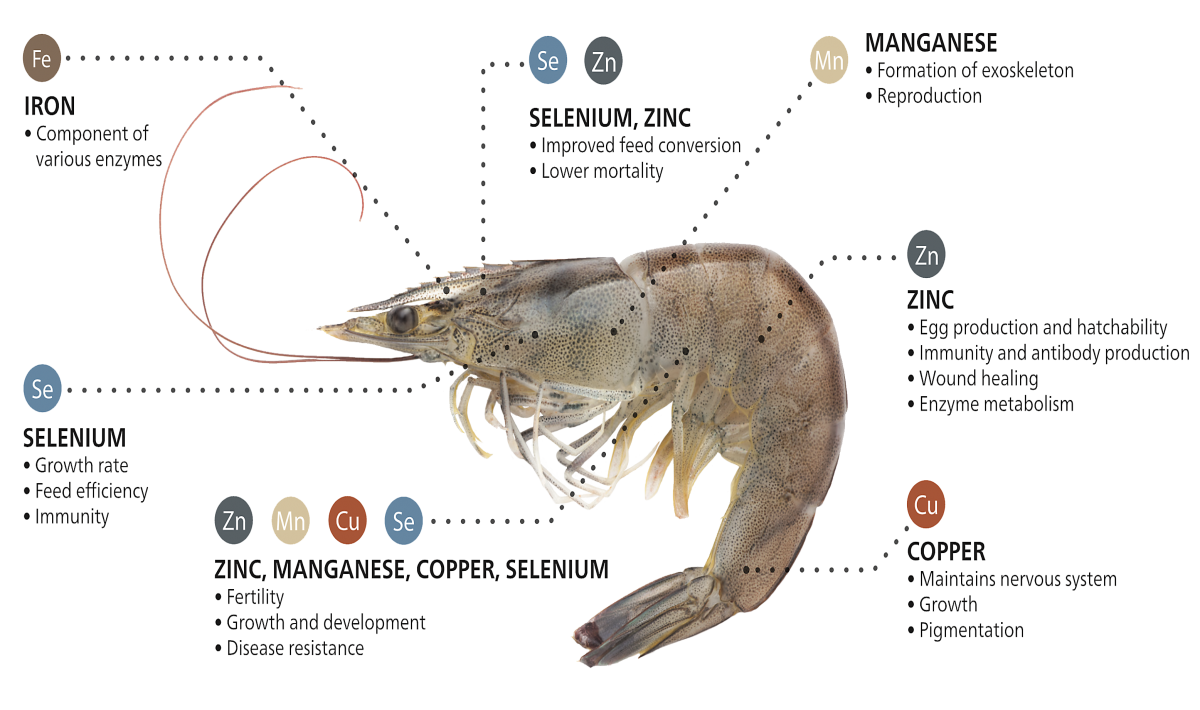 Although the benefits of trace minerals in aquatic nutrition are clear, the exact dietary requirements can be a murky area.

Trace mineral requirements in aquaculture – what needs to be explored?

The exact trace mineral requirements for aquaculture are still being explored and are hence a subject of debate.

According to Lall (2007) a fine balance of trace mineral nutrition is required to maintain homeostasis (maintenance of the internal environment of the animal). Excess mineral intake, either dietary or environmentally, can cause toxicity, while a deficiency can compromise immunity, therefore increasing susceptibility to disease. Lall (2003) has recommended the following ranges of dietary trace minerals in fish (Table 1). 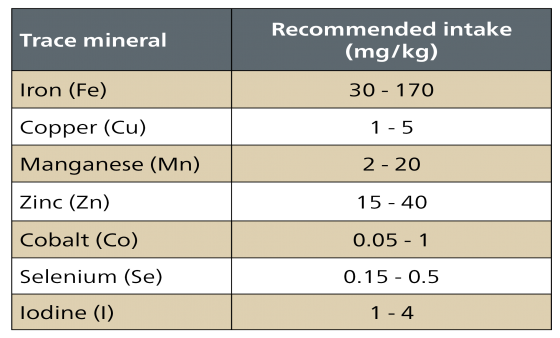 However, from the perspective of the National Research Council (NRC), knowledge on trace mineral requirements for farmed fish and shrimp is lacking (NRC, 2011). As a result, their recommendations outlined in Table 2 and 3 appear incomplete. It is worth noting that the NRC provide no differentiation between trace mineral source (organic versus inorganic), which has major influence on mineral absorption, interaction, bioavailability and dietary inclusion rates. 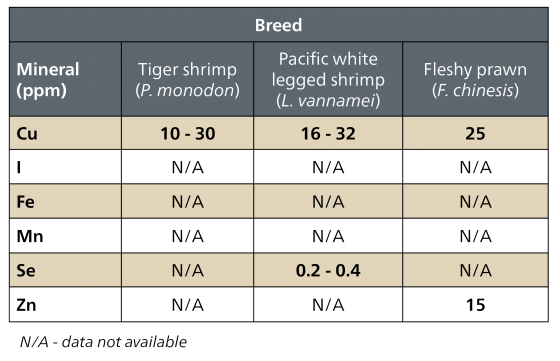 Trace mineral composition and bioavailability can differ markedly in aquatic feed ingredients and complete feeds due to high amounts of fish meal and marine by-products present (Lall 2007; McDowell, 2003). As a result, some trace mineral levels in feed can be exceptionally high. Excess dietary minerals can affect the absorption and bioavailability of other trace minerals within digesta. One example is excess dietary phosphorus which can interfere with the absorption of zinc (Lall 2003).

An example of the relationship between mineral bioavailability and dietary composition is zinc versus protein source. Zinc is better absorbed from animal protein sources than from plant sources such as cereals. Plant feedstuffs contain several substances such as phytate, which can bind to zinc and make it unavailable for absorption in a phenomenon known as antagonism – or negative interactions – between feed components.

If zinc is not supplied at an appropriate level, whole body, intestinal and bone zinc cannot be maintained. A continuous supply of dietary zinc is therefore required. The same holds true for iron –  bioavailability of iron is influenced not only by its chemical form, but also by interactions between other dietary components such as ascorbic acid, which enhances iron absorption, or tannic acid, which can decrease it.

One way that nutritionists counteract antagonistic interactions is to incorporate a mineral program that includes highly stable trace minerals, which must be from an organic source.

Supplementing aquatic feed with trace minerals in an organic form, such as BIOPLEX® mineral proteinates and SEL-PLEX® organic selenium-enriched yeast (Alltech, Inc.), reduces antagonism with other dietary components such as phytates. The chemical structure of BIOPLEX proteinates confer high stability, which results in a trace mineral that is less likely to interact and bind with feed components and more likely to be absorbed and contribute to growth, immunity, and fertility.

Research into the efficacy of BIOPLEX and SEL-PLEX have demonstrated higher bioavailability compared to their inorganic counterparts and warrants the use of lower dietary inclusion rates via reduced wastage of unassimilated minerals.

Rider and Davies (2007) investigated organic zinc and selenium in fish diets and established that organic trace minerals are far more superior in terms of bioavailability and performance when compared to inorganic sources.

[1] BIOPLEX minerals (zinc, manganese, copper, iron and cobalt) are trace minerals that are bound to amino acids and a range of peptides and are co-factors in enzymes critical to the animal’s defense system, growth and reproduction.

BIOPLEX and SEL-PLEX supplementation, either separately or combined with other feed technologies, have demonstrated many immune and growth benefits to a variety of aquatic species in field trials around the world.

Figure 2: Effect of an Alltech feed technology that incorporates BIOPLEX and SEL-PLEX on the survivability of red hybrid tilapia after an immune challenge (Arifin et al.) 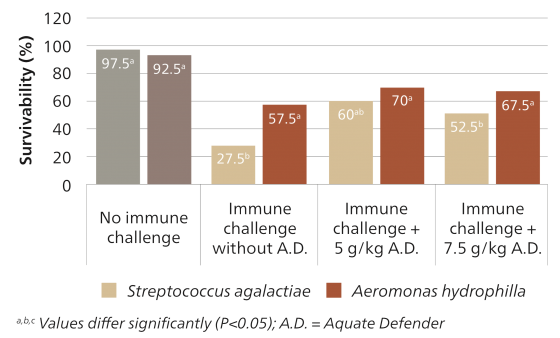 In rainbow trout fingerlings receiving BIOPLEX and SEL-PLEX at 66% of the level of the inorganic trace mineral group, FCR, weight gain, mortality and immunity (via lysozyme activity) were all improved (Staykov, 2005).

When post smolt Atlantic salmon were reared in conditions with suboptimal oxygen, supplementation of BIOPLEX Zinc and SEL-PLEX selenium-enriched yeast improved FCR and growth rate compared to those supplemented with inorganic trace minerals (Figure 3). By the end of the trial, salmon from this group also exhibited firmer filets (Kousoulaki et al., 2016). 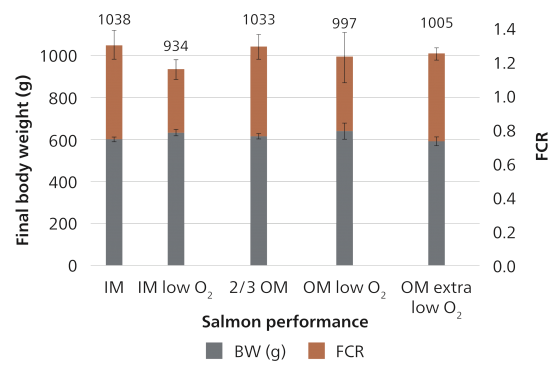 Appropriate mineral management is key to optimum health and performance across several aquatic species, and the incorporation of an organic trace mineral program can have an important role in maximizing fish production and profitability.

References to this article are available upon request. If you have any questions, please contact the Alltech Mineral Management team at KnowYourMinerals@alltech.com

An article by the Alltech Mineral Management Technical Team

Mycotoxins are metabolites produced by plant moulds during times of stress or following an environmental stimulus. These plant moulds can grow on crops in the field or even on stored feedstuffs and feed materials post-harvest. Often, livestock and poultry feedstuffs can be contaminated with multiple mycotoxins because many...

Aquaculture has already demonstrated its crucial role in global food security, with its production growing at 7.5% per year since 1970. About 580 aquatic species are currently farmed all over the world. While aquaculture has the capacity for even further growth, it faces various enormous challenges, especially on the feed, with the growing...

How to control ammonia levels in poultry houses

There are several strategies for controlling ammonia in poultry. These strategies can be used individually or in combination and can help encourage good barn air quality and better potential poultry performance....