9 warning signs of mycotoxins in your dairy herd

What are the impacts of mycotoxins?

Mycotoxins develop in feed materials, both pre- and post-harvest, and can negatively impact all stages of animal production.

Their effects on animals manifest in many different ways, including via reduced growth and efficiency, altered intestinal structure or function, damage to internal organs, the disruption of hormone systems and/or a modified immune system.

When are mycotoxins a problem?

Exposure to mycotoxins can occur in either a large single dose or as a lesser quantity consumed over time. To make matters even more complicated, the cumulative presence of multiple mycotoxins at low concentrations can be just as impactful as one highly concentrated mycotoxin.

Recent surveys in the UK have revealed that almost 82% of total mixed ration (TMR) feed samples contain a moderate to high level of mycotoxin contamination, meaning that now, more than ever, all producers should be on the lookout for indicators of mycotoxin threats.

How to manage mycotoxins?

Produced by moulds and fungi, eliminating poor-quality ingredients can help in controlling mycotoxins in dairy cow feed intake. However, due to the invisible nature of these toxic compounds, even without signs of mould, there can still be a threat of contamination, making mycotoxin detection more complex.

By spotting issues early, you can take steps to mitigate the impact of mycotoxins on your herd’s natural immunity and, subsequently, production profitability.

Here are nine tell-tale warning signs that all farm operators are encouraged to keep an eye out for:

Moulds like Penicillium, Aspergillus and Fusarium are often found in grass and maize silage and are common mycotoxin producers. Colourations can help you identify these moulds. White-to-red/pinkish moulds are Fusarium, or field-borne, moulds.

Blue-green moulds are typically Penicillium, which is more often storage-related but can occur in the field under certain weather conditions. Aspergillus, which is very common in dry climates, is olive green to yellow in colour. 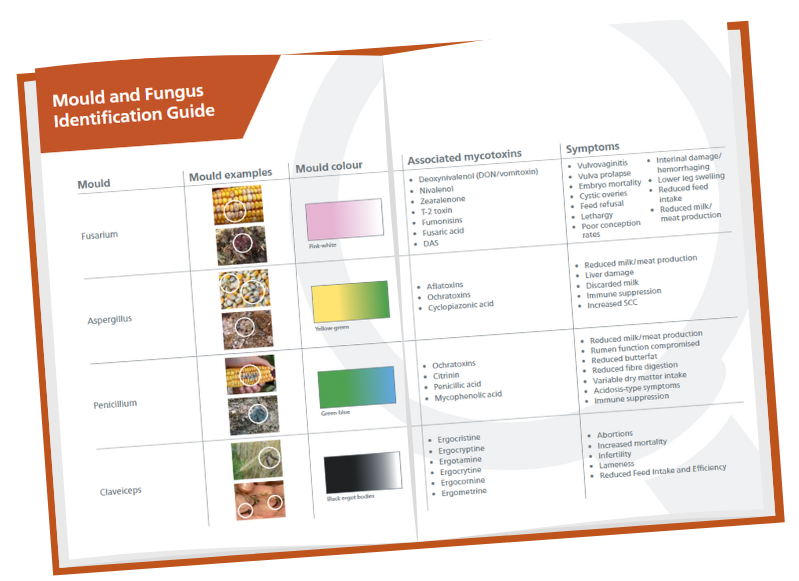 Download the Mould and Fungus Identification Guide to learn more, and regularly remove spoiled feed before it enters the diet.

If there is too much air trapped in your silage pit, it could lead to temperatures rising behind the clamp. This heat can result in slow fermentation and aerobic oxidation, increasing the risk of spoilage and mould and, therefore, mycotoxins.

To avoid this issue, make sure to follow all available guidelines for ensiling, ensuring that the silage is adequately compacted and covered. Alltech Navigate™ is a new feed-waste reduction support service that can help guide you in this process.

A significant tell-tale sign of poor gut health is loose and/or inconsistent dung. When the digestive system is not working optimally due to a mycotoxin challenge, this can often be seen in the consistency of the cow’s waste.

Consumption of mycotoxins, at both low and high concentrations, can significantly impact rumen gut health. These gastrointestinal issues can lead to reduced feed intake and even feed refusal, thereby affecting yields and body condition score.

As well as affecting the cows internally, there are also some external indicators that could suggest issues with mycotoxin contamination. Be on the lookout for swollen hind legs, arched backs and even cracks showing separation of the hooves from the feet.

Mycotoxins are a significant threat to the immune system, with the ability to cause both immune stimulation and immune suppression depending on the mycotoxin type and concentration. This can result in your cows being more susceptible to disease and leaving them unable to tackle bacterial challenges that lead to a high somatic cell count.

Mycotoxins can also impact breeding performance. In some cases, the effects on reproductive performance may be caused directly by mycotoxins, such as in the case of zearalenone. However, reproductive changes may also be due to the indirect effects that other mycotoxins have on animal health.

Trichothecene mycotoxins, such as deoxynivalenol and T-2/HT-2 toxins, have been associated with lower pregnancy rates in dairy cows.

Mycotoxins are unavoidable — there is no way of stamping out their presence completely. However, that does not mean that there is nothing that you can do to help mitigate their negative effects.

To get an accurate picture of your silage’s mycotoxin profile, Alltech offers several state-of-the-art detection services.

Looking for an overarching image of contaminants?

For producers looking for an overarching image of on-farm feed contaminants, the Alltech 37+® mycotoxin analysis can bring a comprehensive array of hidden challenges to light. The cornerstone of the Alltech mycotoxin control programme, this laboratory-based service investigates samples of your TMR, searching for and identifying more than 50 mycotoxins.

Once you have identified the mycotoxins present in your forage and feed, the next step in mitigation is to incorporate a mycotoxin binder that will help to minimise the threat to your cows. Mycosorb A+® from Alltech reduces mycotoxin absorption within the animal, thereby negating the damaging effects of mycotoxins on its health and productivity. It does this through adsorption, the process by which carbohydrate components of yeast and algae cell walls bind to mycotoxins, removing them from the animal’s digestive tract. Also, unlike most binders, Mycosorb A+ binds with mycotoxins produced by Penicillium spp., the most common toxin in forage and feed in the UK, according to recent survey data.

Depending on the source of infection and method of transfer, several steps can be taken to reduce the opportunity for mastitis transfer within the environment and housing, during milking, at drying off and in the diet. 1. Housing   Clean and dry bedding   Heat stress mitigation  Well...

It may feel like the cooler season is around the corner, but there is still plenty of time for temperature and humidity levels to impact herd performance. ...