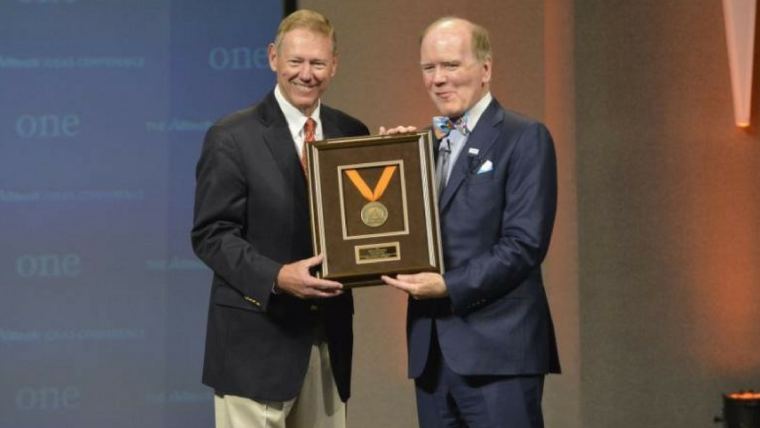 At ONE: The Alltech Ideas Conference, Calipari, head men’s basketball coach at the University of Kentucky (UK), and Mulally, former CEO of Ford and the recipient of the Alltech 2016 Medal of Excellence, both spoke on the idea of building a team and working together to achieve goals within a team. Although their experiences come from different sectors, they share many of the same ideas. Calipari gave five main points that he thought best suit his style of being a leader and building a team, while Mulally explained what he did to bring Ford out of a $12.7 billion loss.

Calipari talked a lot about his “one and done” athletes, who come to UK for one year to play basketball and then leave straight for the NBA.  He explained that it all starts out with “staying in the moment.”

“You can’t get it done in one day,” said Calipari.

He challenges all his teams at UK to abide by this rule. He also encourages his teams to stay steady and keep everything in perspective.

“You have to try stuff and fail fast,” said Calipari.

He emphasized building relationships based on trust that will last forever. Social media is “vital in today’s world,” he said, and you have to “connect with a lot of people, reform, act quickly.”

But he noted that social media can’t take the place of face-to-face contact and creating an attitude through caring. It shows his players that he is serious about his job and he wants what is best for them.

These are all the steps Calipari said make someone a “servant leader,” and this is important because Calipari feels it is his job to build community philanthropists in his team members. All of his former players who are now in the NBA are involved in their community in some fashion, and Calipari feels that this in particular is a personal affirmation that he has done his job well.

Mulally, like Calipari recruiting for his team, recruited the best people to work at Ford. He made sure that he surrounded himself with 16 leaders, nearly all of whom were already Ford employees. He hired the best 16 for the job and made sure that they all supported each other and their teams in the workplace.

Coming in at a time when Ford faced a $12.6 billion loss was a challenge, but Mulally felt company unity could bring them through it.

That’s what was needed to overcome such a big deficit. With everyone buying in and trusting not only Mulally but their entire Ford team, it made everything run more smoothly and lifted them out of that loss.

He shared four key points for leading a team:

“Working together always works,” he said.

John Calipari and Alan Mulally were presenters at ONE: The Alltech Ideas Conference. Audio recordings of most talks from ONE will be made available on the Alltech Idea Lab by mid-June 2016. For access, click on the button below.