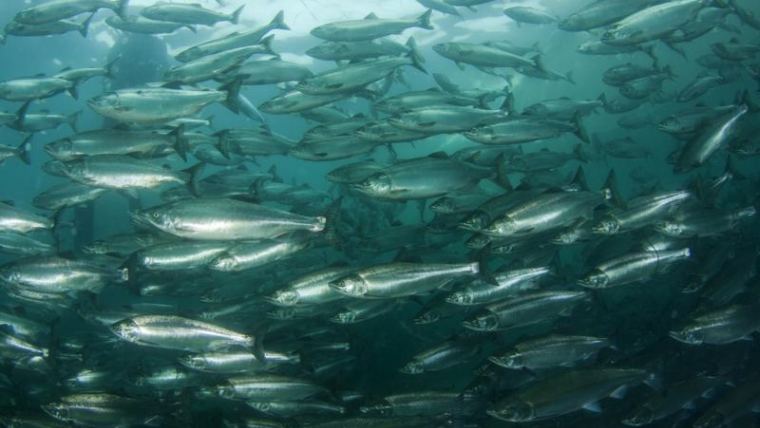 Whether you are a commercial producer of Atlantic salmon, an aquaculture research scientist or a consumer with a fondness for the fish, Lepeophtheirus salmonis matters.

In fact, this sea louse is the reason your salmon dinner is weighing heavy on your grocery bill. Market prices of farmed salmon have been reaching historic highs.

The tiny crustaceans, commonly known as sea lice, that feed on the mucous, skin and blood of the fish are a fascinating challenge for the aquaculture researcher but the bane of the producer’s existence.

With the world market for salmon estimated at $10.7 billion annually (IntraFish), salmon farmers in the major producing countries, such as Norway, Scotland, Canada and Chile, are racing to fight infestations of the damaging ectoparasites.

Marine Harvest has reported that its health-related production costs remain near record levels. Most of those costs are attributed to mortality and sea lice mitigation.

The trouble begins when wild lice-bearing salmon swim nearby.

“These natural populations of lice, whose juvenile stages drift with the current and attach to the salmon, are also brought to our shores on the backs of wild populations of salmon from their North Atlantic feeding grounds,” said John Sweetman, Alltech international projects manager for aqua. “As they come into the estuaries and bay areas to prepare themselves to go upriver and they meet lower salinity water, the sea lice, intolerant of freshwater, become detached from the fish.”

In those semi-saline conditions, the lingering juvenile sea lice become infectious agents preying on nearby caged salmon. The population density of these caged cultures allows the parasite to spread quickly and even contaminate the wild salmon population.

“Sea lice cause physical damage,” said Sweetman. “Physical damage in the skin of the animal allows opportunistic pathogens to penetrate the skin. So, you have opportunistic bacterial pathogens entering through the damage and disruptions in the membranes and barrier structures of the skin.”

Searching for a sea lice solution

A process of elimination has been underway in the search for solutions that satisfy production economics balanced against consumer demand for food source transparency and safety.

Mitigation approaches have included emamectin benzoate. Introduced in 2000 and marketed as SLICE®, the antimicrobial is fed to salmon, poisoning any sea lice nibbling on the tissue of the fish.

“But in recent years, a resistance has been developing, so today’s effective dose is about five times what it used to be and continues to increase,” Dawson stated in a presentation at ONE: The Alltech Ideas Conference 2017.

Hydrogen peroxide baths were once popular among Norwegian salmon producers until food safety regulators raised concerns. Thermolicers, another approach, plunge the salmon through heated water that kills sea lice, but also can damage the fish.

Other strategies, such as sea bath treatments, can be highly disruptive to salmon farms. Once-promising pharmaceutical treatments have become less effective as drug resistance has developed.

“We’re talking about an average 0.5 lice per fish as the upper limit before a treatment has to be undertaken in a region to reduce lice burdens on the fish,” said Sweetman.

New facilities being built in Norway are designed to hold fish longer before being transferred to sea cages. The idea is to reduce the amount of time the salmon spend in the sea, exposed to sea lice.

In 2016, Chile, another of the world’s major producers of Atlantic salmon, became the first country to approve an in-feed treatment formulated by Elanco. Studies are said to show that the treatment inhibits the formation of chitin in sea lice, preventing the lice from developing into adults. Fish treated with the medication are now accepted for trade with many major export markets, including the United States, European Union, Japan and Brazil, according to SeafoodSource.com.

A non-pharma option in the arsenal against sea lice

Led by Dawson and Dr. Keith Filer, research coordinator for aquaculture at Alltech’s Kentucky facility, Alltech and its research partners are investigating a novel approach inspired by work with a specific mannan-rich cell wall fraction (MRF) in other animals.

“The interest in using this material originally came from studies in chickens that indicated that early life exposure to the mannan-rich fraction improved the innate immunity of chickens,” said Dawson.

The Alltech scientists believe this innate immunity is critical to developing resistance to ectoparasites like sea lice. It is the basis for current efforts by Dawson, Filer and their team to expose young fish to the fraction early in life.

The MRF is a carbohydrate derived from the outer cell of a specific strain of yeast — Saccharomyces cerevisiae 1062 — using a proprietary process developed by Alltech. Its use as a feed supplement in terrestrial animals has been well-documented in more than 500 trials and numerous peer-reviewed papers, and recently its effectiveness in aquaculture has been established, according to an International Aquafeed article on gut morphology that Sweetman co-authored with Arkadios Dimitroglou, Simon Davies and Silvia Torrecillas.

The researchers reported that the MRF “not only improves the gastrointestinal morphology and therefore its function through an increased absorptive surface and better absorptive capability but also interacts with the immune system in a modulatory manner and alters enzymes. The combination of all these benefits results in better performance, livability and optimum immune response and therefore gives a more cost-effective production of interest to the commercial producer.”

As salmon begin to mature, they adapt for life in salt water in an intermediary stage known as smolting, which Filer sees an opportune time for priming their immune system by exposure to novel feed ingredients.

“The mucous system of the fish is considered a portion of their innate immunity,” he explained. “So, it would enhance their mucous production, and then when they’re put out to sea, it would enable them to be able to fight those ectoparasites.”

“That was extremely interesting for us in the aquaculture industry, because the mucus associated with the gut is a key component of the innate immune system,” said Sweetman, whose original work got underway in the Mediterranean in 2004 with an initial trial among salmon, sea bass and bream.

“A fish is exposed to the environment, and the first point of contact of the environment is on the mucosal layer, the skin, the gills and the gut of the fish,” he said. “That’s where opportunistic pathogens and other insults are derived from water. So, if we can improve the mucosal status and the gut structure associated with poultry, we should be able to do it with fish.”

Alltech is currently supplying an MRF product to the Norwegian salmon industry. When used as a feed supplement, it has been shown to increase external mucous production on the surface of the fish, which improves overall innate immunity and disease resistance of the fish. Active supplementation has reduced sea lice infections by up to 57 percent, according to Sweetman.

This is a novel approach for nutritionally enhancing diease resistance and controlling the pesky sea lice.

"In looking to the future, the industry will have an additional tool in the arsenal to improve the resistance of salmon to sea lice infections," said Dawson. "This tool will be a centerpiece of advanced control mechanisms as new and more effective ways of administering the supplements become available."