Wait. In China they can do what?

Where on the planet can you try out a new beer, share photos of the brew on social media, buy a six-pack through that same social media channel and have it delivered to your doorstep?

Chinese consumers — as a group, the world’s largest — spent $5.5 trillion on all sorts of purchases made through mobile payment platforms last year. That’s about 50 times the amount spent in this manner in the U.S., according to the Financial Times.

And well-positioned to accommodate a rapidly changing consumer landscape across China is Alltech Brewing.

“They can go on our WeChat channel,” said Dr. Mark Lyons, global vice president and head of the company’s Greater China division. “They can say ‘I just had a Kentucky Ale®’ and they can actually order it directly through that app.”

That’s a far cry from the China of not all that long ago. Most Chinese over age 55 readily recall the austere conditions of the Cultural Revolution of the ‘60s and ‘70s. If in those days you had suggested that private consumption would someday be a significant force in the Chinese economy, no one would have believed it.

But over time, the nation’s industrialization has steadily increased mainstream affluence. Frugality is giving way to consumerism made affordable by discretionary income. Younger generations, driven by digital technologies and social media, are entering the market relatively free of the influences of the past.

“The pace of change in China is very, very fast, and a mere couple of weeks can change the entire dynamic, which means that strategies must be adapted,” said Mark Lyons. “The Western model of quarterly plans or even annual plans does not fit well where competitors can be operating in a much more real-time pace.”

In a report entitled “Meet the Chinese Consumer of 2020,” the McKinsey Quarterly notes that an outcome of this noticeable trend in consumer spending “is a propensity to trade up, driven increasingly by consumers aspiring to improve themselves, the way they live and their perceived social standing. Many Chinese, like their Western counterparts, judge themselves and others by what they buy.”

In its own analysis, the Economist Intelligence Unit (EIU) forecasts nearly 35 percent of the population, or around 480 million consumers, will meet its definitions of upper middle-income and high-income by 2030. That’s larger than the entire U.S. population of 321 million.

The EIU predicts that the portion of the Chinese population defined as low-income will shrink from 36.9 percent in 2015 to just 11 percent in 2030.

“There will be a corresponding bulge in the middle-income bracket, with a growing portion of the population falling within its upper reaches,” stated the EIU in a recent report. “The share of high-income consumers, with annual disposable income of above RMB 200,000 (US $32,100), will rise from just 2.6 percent in 2015 to 14.5 percent in 2030. China will look and feel like a more middle-class society.”

The trend is altering the consumer landscape in the world’s most populous nation as this rapidly emerging middle class expresses changes in preferences and tastes, upgrading consumption habits and switching to more expensive and premium brands — including the libations selected for personal consumption and entertaining.

A key to the success of Alltech’s beverages in China has been savvy pricing, according to Patrick Lin, Asia manager of Alltech Brewing.

“In the past, the highest-selling alcohol products were either on the lowest end of the price scale — mass-produced beer and spirits — or in the highest range — cognacs, high-end wine, etcetera,” said Lin. “Now, the new middle-class consumer is demanding something that’s in-between.

“They no longer want the lower-priced beer their parents drank, and at the same time, they don’t want to spend the massive amounts that previously were spent on luxury alcohol products that were consumed as gifts and at banquets,” he explained. “The middle class wants to go out to restaurants and bars that are offering unique products and environments that are affordable, but not cheap.”

The China beyond Shanghai and Beijing

China is an immense nation of 31 provinces, its regions so diverse that the whole resembles a collection of separate countries.

“I often see companies coming in and seeing Shanghai, maybe Beijing, and assuming that they understand the country,” observed Mark Lyons.

And that, he says, can be a fatal mistake.

“Many subregions are very different in not only their levels of development, but personal, cultural preferences, in terms of the types of products consumers are looking for, but also business practices,” he explained. “This is where it is crucial to have local people in each market. We have representatives in virtually every province of China, and our regional representative offices help us considerably to be able to be more in touch with these local changes.”

Alltech founder and president Dr. Pearse Lyons has long been preparing his company to capitalize on the transitions now occurring in China. Alltech has 250 employees in the country, spread among offices in Chengdu, Guangzhou and Qingdao, with a factory in Tianjin and another expected to open in southern China.

“We have been in China for over 25 years,” he said. “We know the marketplace, and they know us. Therefore, to bring the beer in was almost like a logical extension. We decided to go to the market, so we reached out to our connections. We already had the resources there. They were well-educated, could speak the language and were Kentuckians. We needed to give them something that fit, like Kentucky Bourbon Barrel Ale®.”

With the launch of Kentucky Bourbon Barrel Ale in China five years ago, Alltech became the first independently owned American craft brewery to produce beer in China for national distribution. The division now sells 10 different brews made by Alltech, including Kentucky White Ale® , a citrus wheat beer that recently joined the beverage line.

Sales expanded to Taiwan in 2015, then on to Hong Kong and Japan. Today, Alltech Brewing is the largest independently owned American craft brewery operating in China. 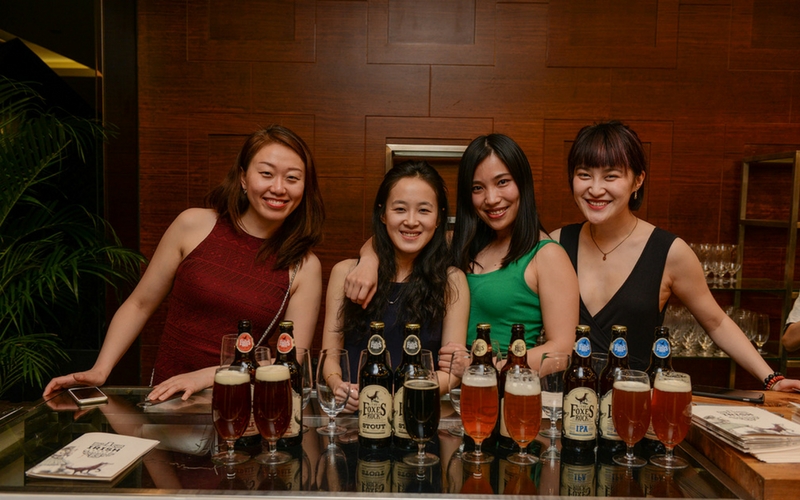 The brands are stocked in stores and restaurants in more than 400 locations across Greater China, including nearly all of the largest cities, such as Beijing, Shanghai, Chengdu, Shenzhen, Chongqing and Tianjin, as well as in Hong Kong and Taipei.

The current sales focus, according to Mark Lyons, is on cities where palettes have long been accustomed to big Chinese beer brands such as Tsingtao, Yanjing and Snow.

“We’re offering something to them that looks completely different,” he said. “It’s probably three times higher in alcohol, has a very different flavor and is presented in different ways. Just getting them to try a beer is one thing. Once they do that, we see the same thing that’s happened all around the world: that conversion happens rapidly.”

And he believes the beverages’ appeal extends far beyond the city limits of China’s sprawling urban centers.

“It’s not even just second- or third-tier cities,” explained Mark Lyons. “It’s already down to communicating directly with our customers on the agricultural side who are in really small places where these sorts of products are not accessible.”

Quite a different picture in Japan

Alltech’s 2017 arrival in Japan required a recognition of dynamics that are in stark contrast with those in China.

Due to the steady aging of the population and low national birthrate, the Japanese drinking population is relatively small. But the Japanese, observed Mark Lyons, make up for it with attention to quality.

“You already have this very high level of affluence,” said Mark Lyons. “The focus on quality is extraordinary. There is such attention to every single detail. It’s a super-premium market, and I think that’s where our products can fit very nicely.”

Raising a pint to opportunity and partnership in China 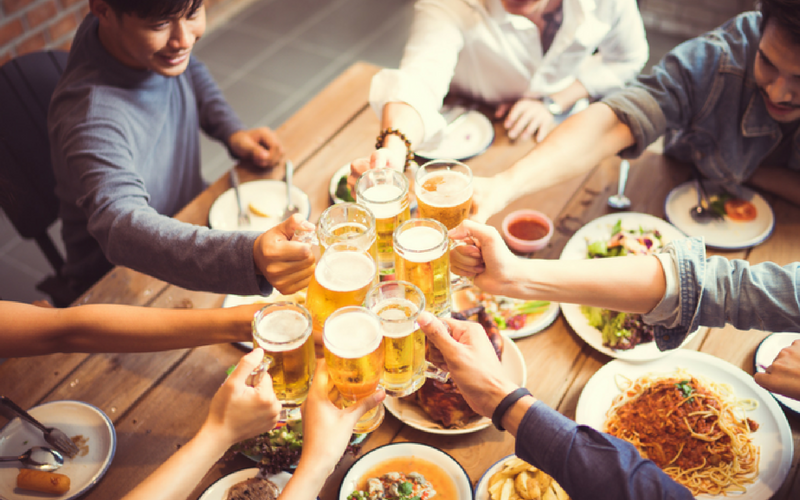 When asked to consider Alltech Beverage’s most important achievement, Mark Lyons cites its presence and stature as the largest American craft brewer in China.

“That provides us with a platform for growth, which we’re very, very excited about,” he said.

And that growth works to the benefit of others.

“We’re beginning to sell other people’s beers,” he said. “We’re in discussions with several large American craft brewers (about) helping them come into the market.”

He notes that many craft brewers cast a wary eye in the direction of the brewing giant AB InBev and its self-titled “Disruptive Growth Organization.” The company is investing in craft breweries and craft beer bars in the Asian market.

“Many independent craft brewers are worried about this,” said Mark Lyons. “They’re concerned about middlemen and ‘gray channels,’ and they’re hesitant to get in. But when they see a company doing the types of things that we’re doing, it gives them a lot of confidence. So, we’re getting a lot of people knocking on our door. We’re seeing it as a great opportunity to provide customers with a truly independent and unique product.”

By 2020, predicts the McKinsey Quarterly, “companies (operating in China) that have focused on maximizing their brands’ scale will have to adopt a model based on a portfolio of more targeted brands or sub-brands to connect with different consumer segments.”

“Our more recent strategy on the beverage side to expand our product portfolio, including other companies’ brands, and also to diversify our own portfolio, is a response to this type of feedback from the market,” said Mark Lyons.

“It is clear that, without a great number of price points and brands that appeal to different demographics, it is difficult to really scale a business in a sustainable way,” he continued. “We have to be thinking about a market for us, in terms of craft beer, that within a little bit over a decade will have three to four times more accessible consumers.”

There are challenges to navigate, warns the EIU analysis: “China’s economic trajectory has become more uncertain, and firms will need to monitor risks accordingly in order to stay ahead of the curve.” 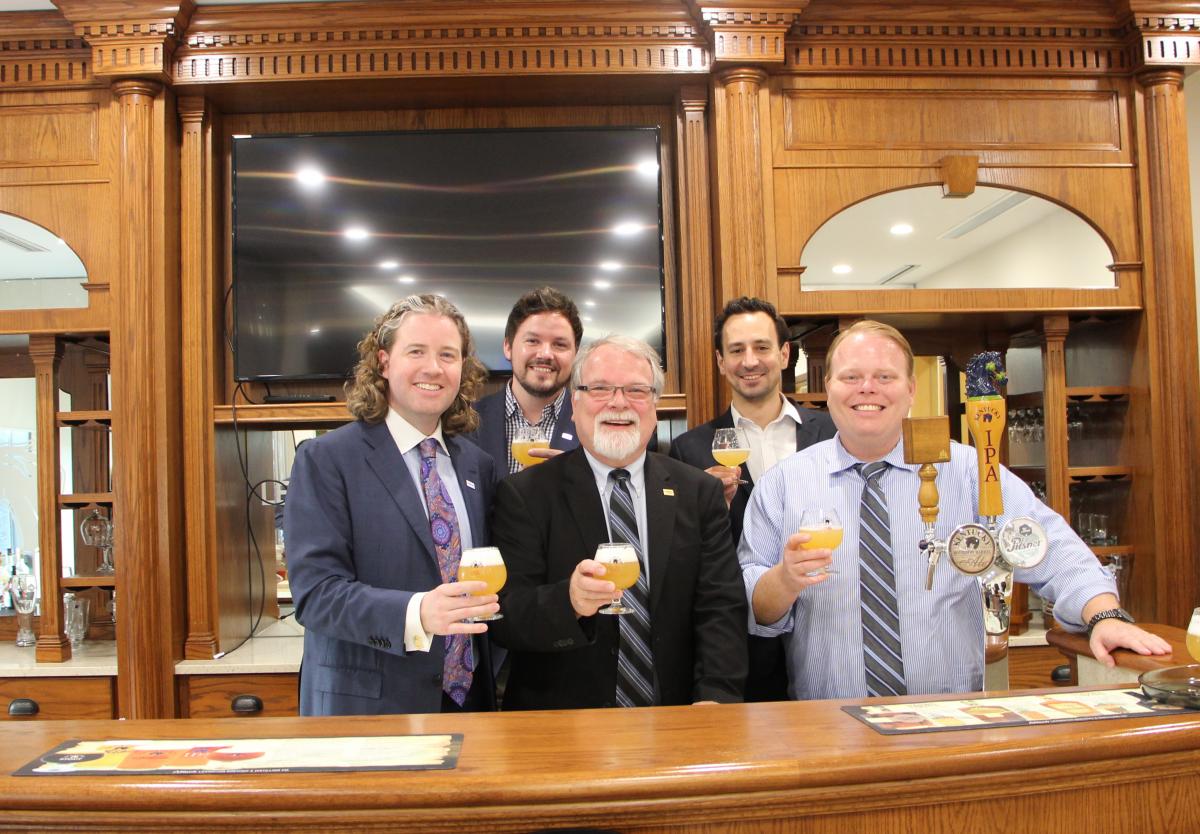 Pearse Lyons sees opportunity. His vision for the company’s beer and spirits interests in Asia is broad and has yet to be fully realized.

“We are actively looking at producing in other areas,” he said. “Keep in mind that we have Alltech Vietnam, Alltech Philippines, Alltech Malaysia, etcetera. Some of these offices are older than Alltech China.

“We can use Kentucky Bourbon Barrel Ale as a major differentiator for us,” Pearse Lyons continued. “The strategy has been: use the beer, use the Kentucky name. We have a unique product to promote Alltech and our home state. It will slowly but surely build up the brand image.”

What is the future of the agriculture industry after a tumultuous year? How will the supply and demand of soybean meal affect the global pork industry? Joe Kerns, managing director of Kerns and Associates, discusses the ways the food supply chain adapted over 2020, ways farmers must be agile to succeed today and what agri-food trends to look for...

In a recent study, the American Institute of Stress reported that 75% of today's employees believe that they have more on-the-job stress than a generation ago. This stress has been amplified within the past year, especially for those in agriculture, as they have worked hard to maintain the global food supply chain. Padraic Gilligan of Gilligan’s...

Modern farmers have countless resources at their disposal that those who came before could only have dreamt of. If we compare agriculture today with what was the norm 10 — or even five — years ago, the contrast is staggering....