Mycotoxins in Aquaculture: how to confront this hidden emerging threat 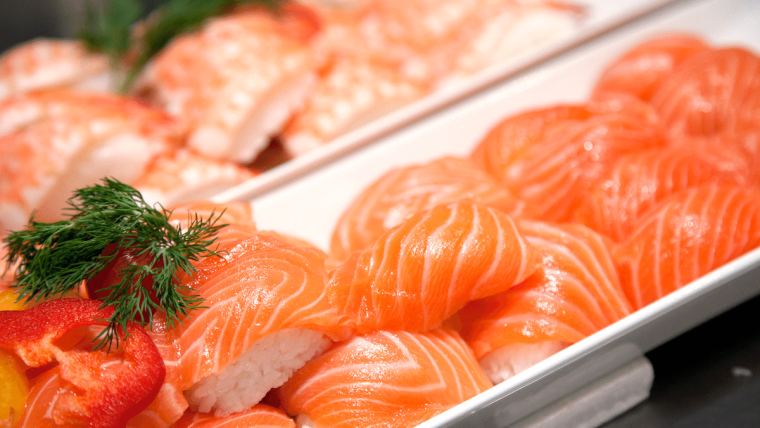 There has always been a threat of mycotoxin-contaminated feeds in the diets of terrestrially farmed animals as a result of the inclusion of high levels of cereals, and this has extended to include aquafeeds over the past few decades, as higher levels of cereals have become more commonplace. Mycotoxins in aquaculture and fish feed is an emerging and an underestimated problem for the industry.

Mycotoxins are chemical compounds produced by soil-borne "filamentous fungi". These lowly microbes are notorious plant pathogens in cereal crops, while their secondary metabolites, mycotoxins, are dangerous feed contaminants for farmed animals. It is possible for fungi to contaminate cereals in the early stages in the field, or later, during the transportation and storage of the commodities. Their growth, as well as the production of mycotoxins, is climate-dependent. That means that different fungi and mycotoxins bloom in different geographic regions.

For instance, Fusarium fungi flourish in temperate areas, and as a result, their corresponding mycotoxin, deoxynivalenol, is highly present. Similarly, in the tropics, the bloom of Aspergillus fungi is often linked to the release of aflatoxin. Unfortunately, the climate change and extreme weather conditions we are now experiencing may alter the fungal community structure and quantity of mycotoxin-producing fungi. Thus, in the coming years, we can expect an unavoidable and unpredictable increased risk of mycotoxins in our fields and agricultural commodities.

The hidden threat to farmers 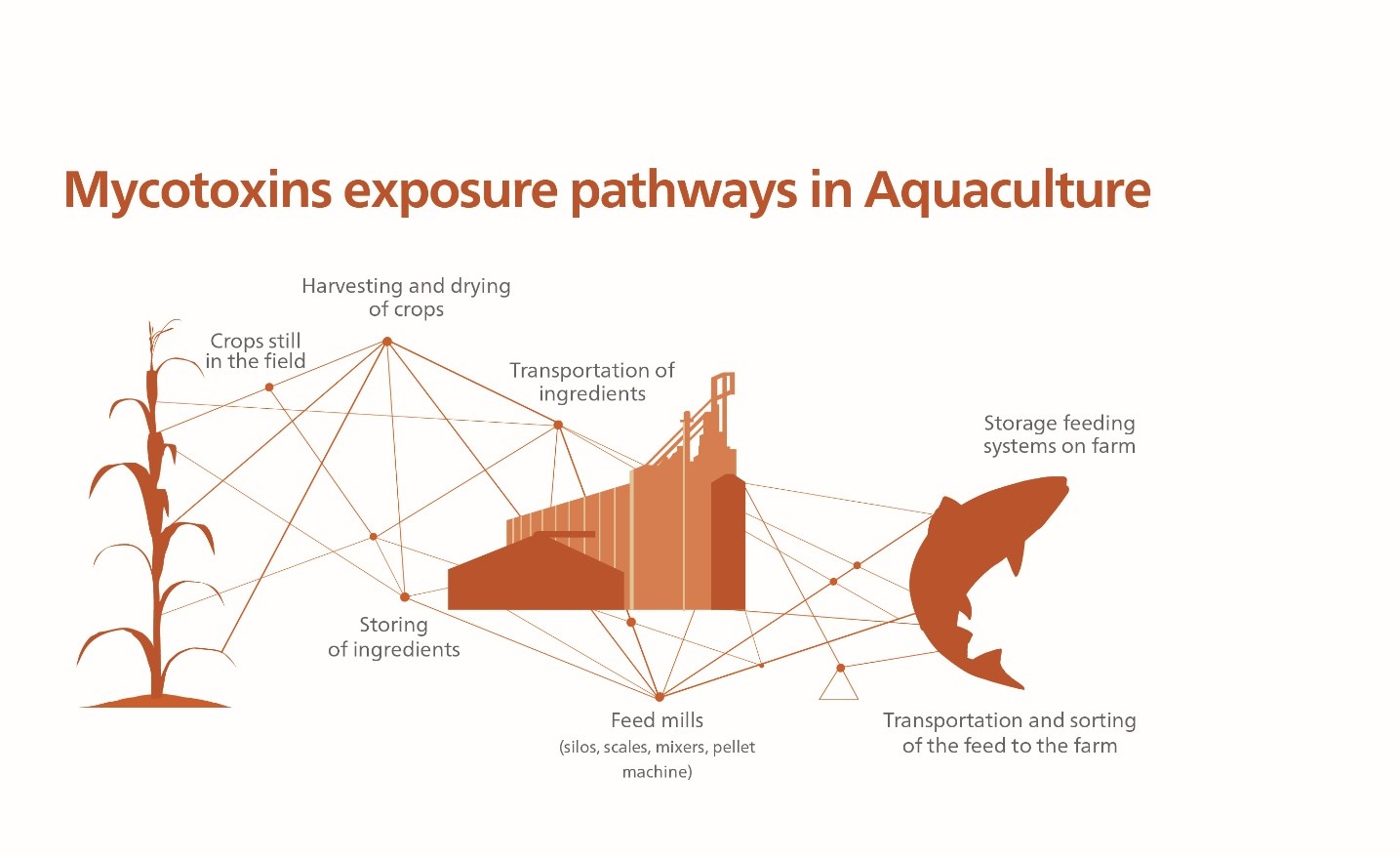 The aquafeed industry has made remarkable attempts to develop sustainable fish feeds by reducing the inclusion of traditionally used marine ingredients and replacing them with novel ingredients derived from crops and their byproducts. Thus, the inclusion of plant-based ingredients in fish diets, along with some known nutritional limitations, also introduces a potential exposure pathway for mycotoxins. To our knowledge, corn and its byproducts are the most highly contaminated with mycotoxins, followed by wheat and soybean products. If we consider the industry's long-term goal of reducing the value chain’s dependence on marine ingredients, then we can expect much higher inclusion rates of plant-derived raw materials in aquaculture feeds. Undoubtedly, these higher inclusion rates of plantstuffs, in combination with ongoing climate change, may boost the presence of mycotoxins in fish feeds, making the challenge of keeping contaminants out of fish feed even more difficult for the aquaculture industry.

Effects of mycotoxins on fish health and performance

Based on our established knowledge from the Alltech 37+ lab database, numerous individual mycotoxins have been detected in fish feed samples. In most cases, more than one mycotoxin is simultaneously present in a feed batch, at unpredictable levels and combination patterns. There are indications that some combinations might have synergetic effects on animals. However, the interactions among mycotoxins that co-occur in the feeds are not well-determined, as most of the research focuses on individual mycotoxins and not their combined toxicity.

An additional challenge to unraveling the effects of mycotoxins in aquaculture is the complexity of the industry itself. Fish farming is diverse and can include different fish species with different life histories, physiologies and, as a result, sensitivities to the toxins. The impacts of mycotoxins depend on various factors, including:

The biological effects of the most common mycotoxins (aflatoxin B1, ochratoxin A, fumonisin B1, deoxynivalenol, T-2 toxin and zearalenone) are described below based on studies on mammals. 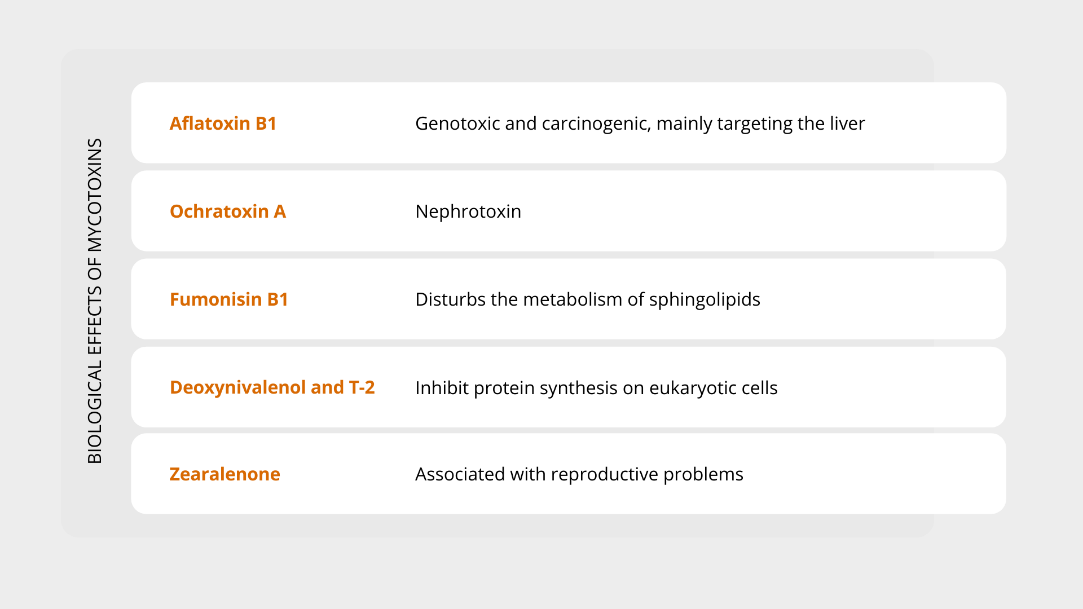 As a result of the developing trend of mycotoxins in the aquaculture industry, scientists are undertaking research trials aimed at evaluating the impact of mycotoxins on fish species. Initial reports of the results are focused on growth trials, indicating that we still have quite a long way to go. Regardless of the type of toxin, reduced growth performance and high feed-conversion ratios are often associated with the ingestion of contaminated feeds.

Growth might be affected directly, due to lower intakes of contaminated feeds, or indirectly, due to the molecular damage the toxins induce on the cellular level. In any case, the final output is the same: reduced growth performance for the fish and economic losses for the fish farmers. Unfortunately, mycotoxin contamination is a “silent” enemy for farmers, since most cases are not correlated with visual symptoms. Long-term ingestion of feeds with low levels of mycotoxins or acute exposure to high levels might be a reason for the unexplained mortalities that occasionally are observed in fish farms.

Sustainability is our priority, and we feel we have a responsibility to establish and maintain an aquaculture industry that protects farmed fish welfare, helps farmers maximize their profits and creates sustainable products that are essential for consumers to live a healthy balanced lifestyle.

To properly manage the mycotoxin risk at the industrial level, it is crucial to examine potential solutions at all of the critical points in the value chain, from the fields to the feed mills. Starting in the fields, good agricultural practices — like growing resistant crop varieties, crop rotation, soil tillage, and chemical and biological control of plant diseases — are recommended.

At the pre-harvest stage, mycotoxin contamination cannot be fully prevented, especially during unpredictable weather conditions. Raw material suppliers should implement methods for rapid mycotoxin analyses in cereal products to accept or reject a batch. Unfortunately, these quick tests can only detect a few toxins, and the regulatory limits vary among different countries. Thus, the responsibility of mycotoxin management in aquafeeds is automatically transferred to the aquafeed producers.

At this final stage, mold inhibitors are usually included in the feed formulations to prevent fungal growth in the finished feeds during storage. Mycotoxins produced in the pre-harvest stage are still present in the feeds and remain almost stable in high temperatures during the extrusion process. As such, feed producers should consider detoxification feeding strategies in order to eliminate the negative impacts of mycotoxins on fish after exposure.

Among different commercially available detoxification products, enzymes appear to have a high selectivity in transforming mycotoxins to less toxic forms. However, this strategy would only be effective if aquafeeds contained just one mycotoxin. In reality, as mentioned previously, a cocktail of mycotoxins is likely to be present in the feeds, and it is not feasible to supplement an enzyme for each potential toxin. As a result, attention is shifting to more practical and universal solutions, such as mycotoxins binders. In general, organic adsorbents bind with a larger spectrum of mycotoxins than the inorganic ones.

Overall, effective mycotoxin management is about seeing the whole challenge, from the farm to the feed mill and from risk assessment to feed management. The symptoms can be many and varied, but the outcome in all cases will be reduced performance and lost profits. The Alltech Mycotoxin Management team provides a number of solutions to help you mitigate the threat you could face from field or storage mycotoxins. Speak to the aquaculture team today and find out how you can mitigate the threat of mycotoxins in your feed. Email aquasolutions@alltech.com. 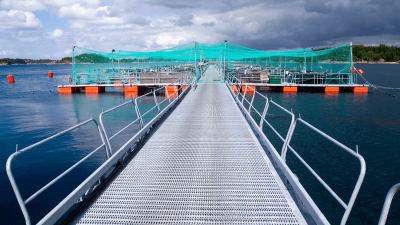 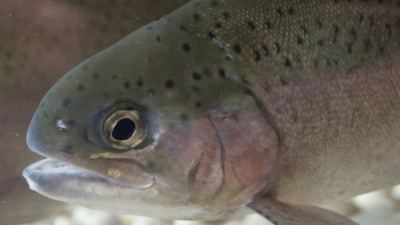 Aquaculture, in contrast with capture fisheries, has remained stable over the last few decades. The industry continues to grow and contribute to the increasing food supply for human consumption, reaching worldwide production of 80 million metric tons (Mt) in 2016. To sustain its growth, the aquaculture industry is highly dependent on commercial... 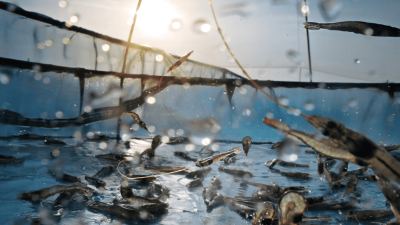