The influence of global economics on modern agriculture 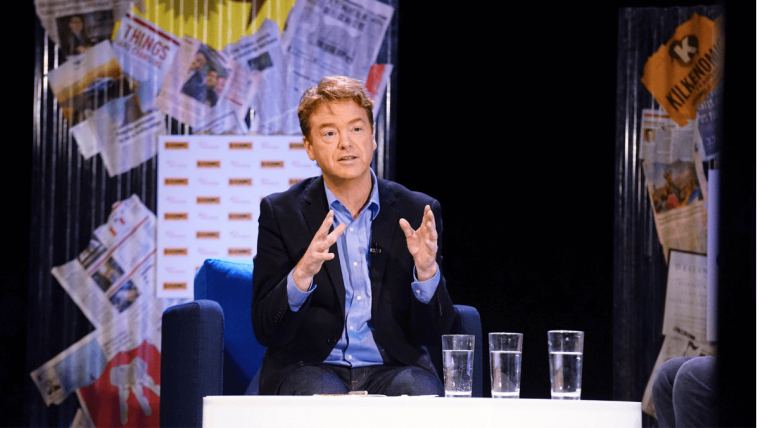 When it comes to our priorities in life, our day-to-day concerns can often take precedence over our long-term goals. We are constantly focused on what is happening right now, in our careers, families, social lives and more. Very rarely do we take the time, or even get the opportunity, to take a step back and look at the bigger picture. However, when we do get to take this broader view, it is only then that we begin to observe the issues that not only affect ourselves but the world and the people around us. And not only can we identify these challenges, but we can also engage with them and develop the opportunities and solutions that will help us all for generations to come.

This was one of the main themes of “Economics and Health: A Natural Connection,” an in-depth keynote discussion between Alltech president and CEO Dr. Mark Lyons and Irish economist, author and university lecturer David McWilliams during the Alltech ONE Ideas Conference. Over the course of their conversation, the two speakers discussed a range of different countries that significantly influence global agriculture and assessed how their current and potential agricultural practices could affect the world as we know it.

“How do we become what will be described as ‘good ancestors,’” asked McWilliams, “so people in the future can look back at us and say, ‘They left the place in good nick’?”

This conversation came on the heels of a new animation project between Alltech and McWilliams. In a series of short videos, the two teamed up to focus on different nations’ economies in a quest to understand them better and learn how our histories and ideas are interrelated.

“We thought it would be a good way to look at what's the big global challenge,” McWilliams explained. “What are the historic, what are the momentous events going on? And then (we can) say, ‘Okay, how do these percolate down into countries big and small, major producers but also small, nimble producers?”

The outcome of this journey into world economics has been the revelation that everything is connected and that we all have a part to play in the betterment of our planet.

“What the (COVID-19) pandemic has told us is that none of us are alone, none of us can isolate ourselves, and the world is kind of smaller than we thought — and more interrelated,” McWilliams continued.

United States: Going back to its agricultural roots

The first of these country-focused animations looked at the United States. In the video, McWilliams pointed out that:

Taking all of this information into account, McWilliams insisted that the U.S. itself will be the source of change in our environmental future.

“I think American culture is changing, at least when you see it from the outside,” explained McWilliams when asked his thoughts on the current Biden administration and what it means for the future of the U.S. “He's saying, ‘There's no point being wealthy if the wealth is only (in the hands of) a small minority. The wealth has to trickle down to everybody else. And if it doesn't trickle down, we're going to force it up.’”

What President Biden understands, according to McWilliams, is that the environment and inequality are the important issues and that they need to be addressed in order for the world to move forward, even if that goes against previously held beliefs.

“We are now at this phenomenal, intergenerational tipping point that the older generation isn't quite getting and the younger generation hasn't quite articulated,” said McWilliams. “But what it is is a change of macroeconomic policy, and what is driving the entire thing is this idea that we cannot simply be a gratification mindset, all of us together.

“We cannot have an immediate gratification mindset, which is ‘me, mine, my balance sheet, my profit margin, etc.,’” he continued. “We have to have a legacy mindset that we are, as I said at the top of the animation, we're just custodians. We're only passing through, right?”

McWilliams also highlighted the Biden administration’s understanding that the farming community is key to addressing these issues, especially regarding the country’s environmental impact. He said that the president realizes that agriculture is the solution to meeting carbon-neutral targets in the future. With this in mind, McWilliams believes U.S. agriculture is about to go through an enormous change, reinstating confidence and self-belief in the industry that has been missing for a long time.

When it comes to feeding the world, Brazil is at the forefront. The South American country is:

But, according to the animation created by Alltech and McWilliams, Brazil has often failed to spread the good news stories of its agri-food industry. While its soybean farmers may feed billions, we only ever hear nightmarish stories of them forcing cattle ranchers off their land and allowing the rainforest to be destroyed. The video suggests that maybe now is the time for Brazil to reassess its legacy and to show how, rather being than part of the problem, its agricultural industry is actually integral to the global solution.

McWilliams is convinced that as long as Brazil can improve the messaging, it could be at the forefront of agricultural and environmental change.

However, he believes that the country first has to get its story right. He suggested that Brazil has to focus on aggressively positive messaging, revealing to people how much of what they eat comes from Brazil and how efficiently it is produced.

According to the next installment in this animation series, the next 30 years will be the most important in the history of agriculture. This will be mainly due to the changing economic and agricultural landscape of China and Asia as a whole.

The short video states that in order for China to succeed in becoming the world’s largest economy and military power, it must secure a sufficient food supply for its people and ensure that they are not subjected to inflated food prices. However, this is complicated by the fact that China has limited natural resources, particularly water. The outcome has been a transformation and modernization of Chinese agriculture, an industry that utilizes cutting-edge agriculture technology like no other country. This development has allowed China to stake its claim as the world’s most sustainable food producer.

Another huge trend in China and Asia as a whole, McWilliams pointed out, is that with newfound wealth comes a change in diet. This can be seen with upper-middle-class Asians, who are dining on a more Western diet of beef and dairy instead of traditional tofu and rice. This shift in taste is another indicator of how the continent will influence food and agriculture production and the supply chain as we move forward.

“The future is one whereby China will try and do whatever it can to make sure that its agricultural production remains high and/or that it can buy in food,” McWilliams explained.

Ireland: The benefits of modernizing agriculture

When considering a list of some of the biggest agri-food producers and consumers on the planet, you could be forgiven for thinking that the addition of this small island on the edge of the Atlantic was a clerical error. But Ireland is a significant player when it comes to the global agriculture industry. According to the animation focusing on the island, Ireland’s geographic location and climate make it the perfect place for healthy grass growth. And with healthy grass growth comes healthy cows. This amounts to a total of $13 billion in annual food exports.

However, there are large stumbling blocks scattered along Ireland’s path to energy-efficient and sustainable food production. One is the commonly encountered misconception that the solution to reducing carbon emissions is to reduce food production — something that McWilliams said the European Union is pushing but that he believes is a mistake.

“In order for the European Union to get an aggregate reduction in carbon emissions,” McWilliams evaluated, “it would seem to me much more logical to favor those countries that have had an evolutionary or ecological or environmental gift, in order to actually produce more, not less, in places like this, because your input/output ratio is so much lower here (in Ireland) than it is either in the parched Mediterranean or in the frozen tundra of the North.”

McWilliams believes that in order for Irish agriculture to modernize and grow, it needs to take a leaf out of the book of one of Ireland’s leading sectors: technology, which generates over $25 billion in exports. He said in the animation that embracing innovation could cultivate new agricultural breakthroughs, making Ireland the most resource-efficient, carbon-neutral, sustainable food producer on Earth — something which, in turn, could produce a new export: incredibly valuable ag-tech.

In concluding the discussion, McWilliams reiterated that everything in economics is interrelated and that positive change now will lead to further growth in the future, allowing us to leave a positive legacy for generations to come.