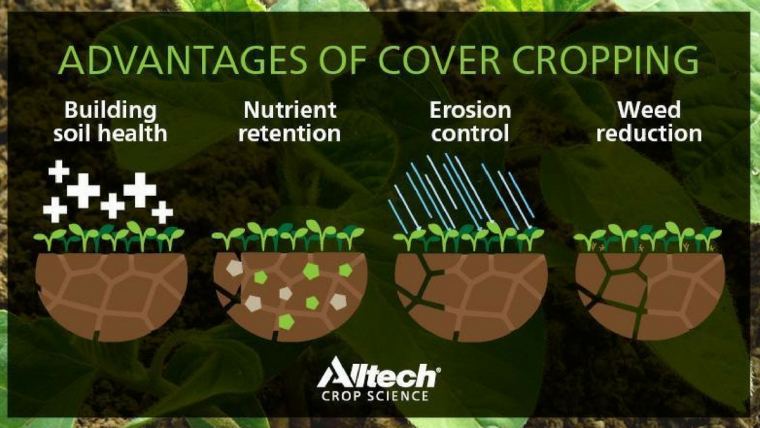 Are you looking to improve soil health and your area’s water quality? Kentucky farmer Jim Wade believes you should look no further than the addition of cover crops to your farm operation.

Wade plants three- and four-way mixes/combinations of various seeds with cereal rye. The use of a cover crop mixture that contains two or more species is often more effective than a planting of single species cover crop. Wade has experimented with cover crop combinations that include red clover, crimson, vetch and Austrian winter peas.

“My fields planted with cover crops don’t have brown runoff,” said Wade. “I measure for compaction and never find any.”

Cover crops also add organic, living matter to the soil with the degradation of their roots, explained Chuck McKenna, Alltech Crop Science territory sales manager. McKenna cited a research demonstration by the University of Kentucky in which one field plot has been no-tilled for more than 30 years.

“There is nearly a difference of 10 inches in soil height between that and the rest of the area,” he noted, referring to the building of organic matter.

No-till is almost a requirement when incorporating cover crops, added Wade. On his farm — where he raises corn, soybeans and wheat — he has been practicing no-till on 100 percent of his acres for more than 10 years.

“The first thing I noticed after trying cover crops was that I no longer had a horseweed (marestail) problem,” said Wade.

This year, he has a split test on corn acres.

“The test looks to be very definitive,” he said, in favor of those with cover crops.

With reduced weed pressure, Wade has been able to cut his herbicides cost in half.

Although today’s commodity prices are low, this is not the time to cut back on exploring cover crops, suggested McKenna.

Wade is one of many farmers participating in the Conservation Stewardship Program (CSP). He has enrolled 600 of his 1,000 acres in the cost-sharing program.

In 2016, the United States Department of Agriculture (USDA) Natural Resources Conservation Service is making $150 million available for agricultural producers through the CSP. It is estimated this will help add 10 million acres to the USDA’s largest conservation program.

With yield being the main way to increase profit, Wade happily reported that he believes he will see a 10 percent yield increase in his soybean fields this year.

As with any early adopter, Wade has had to adapt current technology to keep up with changing needs. With a background including training in engineering, he has modified his equipment to fit his cover crop strategy.

Crimpers are a good idea, Wade suggested. He has also custom built a 60-foot planter for planting into cover crops.

“It’s heavier than it used to be, and I use as much down pressure as I can get,” he said.

To plant the cover crops, Wade has a Hagie highboy sprayer that has been modified for broadcast seeding.

In conclusion, McKenna believes the addition of cover crops are a win-win for producers.

“They fit into an overall plant and soil health scheme,” he said. “They can complement — not replace —conventional programs.”

If we learned anything from 2020, it is that we cannot control everything. For instance, we can’t control the weather, but we can work to control the mycotoxin risk it presents. Weather is the main influencing factor when it comes to mycotoxin risk, leading to a variation in risk levels across the U.S. This year is no exception to that trend,...

Minette Batters represents the interests of 47,000 members of the National Farmers’ Union of England and Wales (NFU) as the organization’s president. She joined the podcast to discuss protecting farmers through agricultural policy, small farm innovations that will lead to more sustainable food production and why she is hopeful about the future...