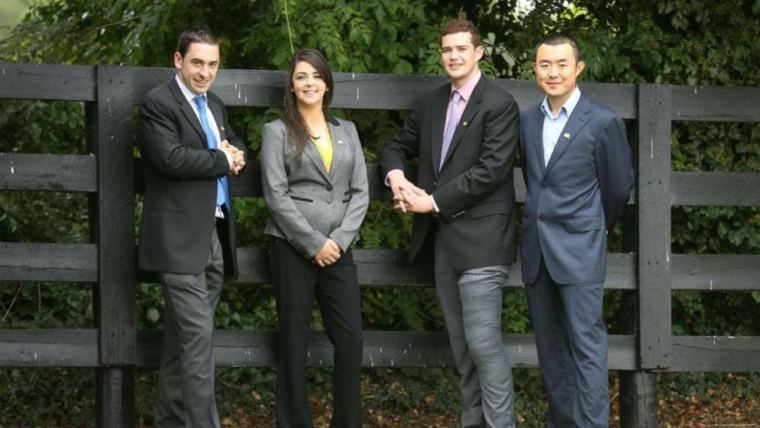 We are very excited to welcome the first ever members of our new Alltech Dairy Career Development Programme - Niall Brennan and Joseph Butler from Co. Louth, Ireland, April Higgins from Co. Mayo, Ireland and Han Longfei from Henan Province, China.

Each member will be based in Alltech European Headquarters, Dunboyne, Ireland for the next ten weeks before taking their on-farm positions in November as part of the 40 week programme. Members will be based on farms in Turkey, Vietnam, US and China.

Here is a brief bio on each of our new team members:

Niall Brennan is from county Louth, Ireland. His passion for the dairy industry came at a young age while growing up on the family farm. Brennan recently graduated from University College Dublin with an honours degree in Agricultural Science, where he specialized in Dairy Business. In 2012, Niall received a scholarship to travel to New Zealand where he spent six months working on a dairy farm in Canterbury. He will be working in Turkey.

Joseph Butler grew up in a small village in county Monaghan, Ireland. He attended Ballyhaise Agricultural College and University College Dublin where he earned an honours degree in Animal and Crop Production. Butler has a strong beef farming background, as he hails from a progressive suckler family farm. He has also previously managed a large beef farm in Loire valley, France and a large dairy farm in South Dakota, USA in 2013. Additionally he has worked with the local feed mill in Monaghan giving his additional expertise in the area of animal nutrition. He will be working in Vietnam.

April Higgins is from county Mayo, in the west of Ireland and has been very involved in the Irish agricultural industry from a young age through showing and breeding cattle. Higgins recently graduated from University College Dublin with an honours degree in Agricultural Science where she specialised in Animal Science. As part of her degree, Higgins completed a two month work experience on a large dairy farm in South Dakota, USA. She also spent four months reporting for Ireland’s leading agricultural publication, The Irish Farmer Journal. She will be working in the US.

Han Longfei grew up in Luoyang, Henan province, China. He was awarded a BSc in Animal Science and an MSc in Animal Genetics in Huazhong Agricultural University. Longfei spent the last two years of his MSc travelling around China visiting farms, talking to farmers, speaking with scientists and technicians in China and around the world. He will be working in China.