The antibiotic-free “other white meat”

Antibiotic-free is a hot topic these days, but have you noticed the discussions mainly center on poultry? What about pork, “the other white meat?”

If pork intends to align itself with poultry in the minds and preferences of consumers, it’s time for the industry to pay heed to the consumer demand for protein produced without the use of antibiotics. Many areas around the world, including the European Union and the United States, are already legislating the judicious use of antibiotics, but some consumers have pushed even further for “no antibiotics ever.” While some consumers’ demands may emanate from misinformation, it doesn’t require a crystal ball to understand that change is at hand for traditional production.

According to a recent study by Feed International, 57 percent of respondents report more than half of their company’s production is antibiotic-free. The study was not specific to production animal species, but it’s clear that the antibiotic-free movement isn’t slowing. It’s coming down the pipeline fast, and pork producers would do well to prepare for their customers’ expectations.

It is probable that consumers will soon turn their eyes to pig production with the same scrutiny and expectations they have had for poultry.

Pork has the greatest stomach share among meats in world consumption. The Alltech Global Feed Survey 2017demonstrated an 8 percent increase in feed for pork production in 2016, and that growth is expected to continue its rise, particularly as the population increases. In the U.S. alone, pork is projected to have a 3 percent growth, according to Rabobank’s 2016 fourth quarter report. 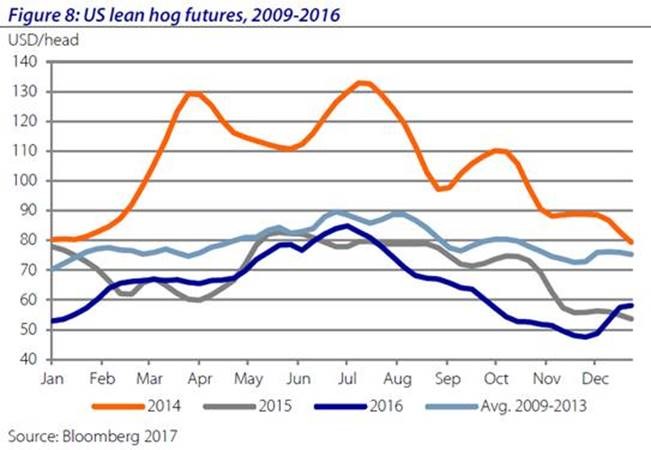 Despite its top position among meats and its growth, pork has not contended with the same level of consumer-driven scrutiny as the poultry industry, which has been pressured to remove antibiotics from production as much as is humanely possible.

In dealing with the demand for antibiotic-free poultry, some retailers and major restaurant chains have already anticipated the shift in attention to pork.

Here is a list of a few that have made their plans regarding future pork sourcing public:

Chipotle and Panera Bread: Both have made claims to commit to sourcing some of their meat from antibiotic-free livestock.

Subway: Intends to transition to antibiotic-free pork once it completes its chicken and turkey transitions. 2025 is the approximate date.

Walmart and BJ’s: Currently have some antibiotic-free pork meat available.

Chick-Fil-A: Aims to be “No antibiotics ever” by 2019, but their commitment has been specific to their chicken. Will the bacon and sausage be next?

As retailers begin to pull from the supply chain, we might see a domino effect toward wider adoption of antibiotic-free production within poultry.

Where else is the pork label turning “antibiotic-free?”

Antibiotic-free pork production is flourishing in Denmark, for example. In 1995, a program known as DANMAP was established by the Danish Ministry of Food, Agriculture and Fisheries and the Danish Ministry of Health for “surveillance of antimicrobial consumption and resistance in bacteria from animals, food and humans.”

For over 15 years, Danish farmers have only relied on antibiotics to treat illness in their herds. The program they follow allows for this therapeutic use and, when combined with other management techniques such as delayed weaning, it has shown to be just as effective as traditional production. Interestingly, according to an article in the New York Times, it would only cost U.S. farmers $4.50 per head to follow a Danish model.

What’s holding pork back from capitalizing on the antibiotic-free movement?  First and foremost on producers’ minds is the risk of decreased profitability. Animals that do not receive antibiotics are more prone to sickness, and, of course, mortality. On several occasions, Dr. Rodger Main from the College of Veterinary Medicine at Iowa State University has cited a 2011 study in which the cost of producing an antibiotic-free pig was $11 per pig, increasing to more than $15 if one incorporates the overall risk that only 70 percent of the herd will survive production. This is significantly higher than the more recent New York Times estimate, but this range illustrates how exact production costs are highly variable and may vary daily based on feed costs.

Another worry is decrease in production weight. This adds to higher production costs and, together with the threat of mortality, can account for the pork industry’s slow adoption of antibiotic-free production, especially given that antibiotic growth promoters have proven their ability to increase animal size and weight.

Additionally, certification of antibiotic-free pork can be costly and time-consuming. Transitioning one’s herd from traditional use of antibiotics requires strategic planning and the implementation of counteractive measures to minimize the effect it can have on the operation’s bottom line.

What has made antibiotic-free poultry successful?

The poultry industry has been finding success in their transition to antibiotic-free production by following practices such as good husbandry, fewer birds in pens, feeding vegetarian diets, increasing downtime between harvesting flocks, etc.

However, there are some ways these issues can be addressed. There is evidence that pigs can not only be less susceptible to infectious risks, but may in fact thrive when certain natural feeding supplements are added to the diet.

For information on how Alltech can support your swine operation in reducing antibiotics or transitioning to antibiotic-free production, visit www.alltech.com/antibiotic-free or contact your local Alltech representative.

Iowa State University. October 2002. “Minimizing the Use of Antibiotics in Pork Production.” https://www.ipic.iastate.edu/publications/ipic8.pdf