Is agriculture feeding the world — or destroying it? Discussing climate change, greenhouse gases and livestock emissions with Dr. Frank Mitloehner 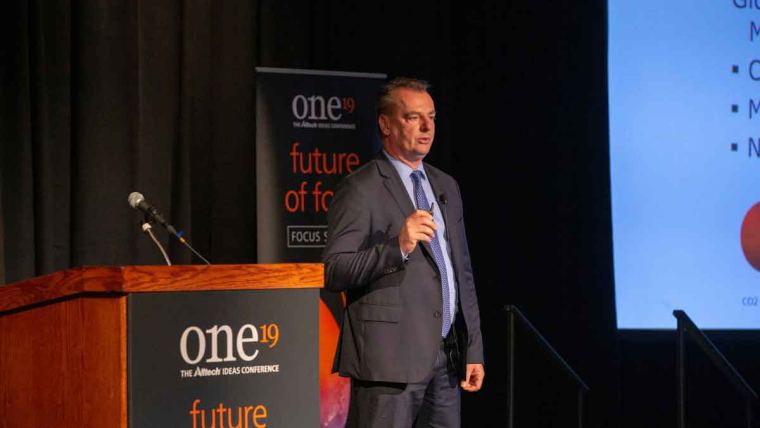 Dr. Frank Mitloehner takes the stage at ONE: The Alltech Ideas Conference to discuss the truth about agricultural emissions.

Farming is often a thankless job; the hours are long, the paycheck is not very impressive, and vacation and family time are frequently sacrificed. With the population expected to triple by 2050, farmers must now face the daunting task of feeding a rapidly growing world. But misinformation is spreading like wildfire, including false data claiming that agriculture — specifically livestock — is the biggest cause of climate change. So, how are farmers expected to feed the masses when some of the food they provide is under attack?

Dr. Frank Mitloehner, professor and air quality specialist at the University of California–Davis, presented on this topic at ONE: The Alltech Ideas Conference (ONE19), and his message was clear: agriculture and farmers are the solution, not the problem, and it is our duty to educate the masses with the truth about agricultural emissions.

What about fossil fuels?

“First and foremost,” said Dr. Mitloehner, “I do believe that climate change is happening.”

Dr. Mitloehner explained that companies producing and selling plant-based meats benefit from spreading the lie that agriculture has the highest global warming potential (GWP). Unfortunately, the real threat to climate change — fossil fuels — is overshadowed by the media’s war on livestock.

This stream of misinformation has spiraled so out of control, noted Dr. Mitloehner, that people are directing their frustrations toward the wrong culprit. How can we not only support the agricultural sector but also help clear its name?

1)     The methane produced by livestock is vastly different from the greenhouse gases created by fossil fuels. Dr. Mitloehner broke down the creation of these emissions by livestock:

This continuous cycle helps keep the balance between the atmosphere, plants and cows. Alternatively, fossil fuels like oil and coal are taken from the ground, burned and subsequently released into the atmosphere without any sustainable contribution to the planet.

2)    Herd size has decreased over the past 200 years, said Dr. Mitloehner. Additionally, since 1975, the number of beef and dairy herds has decreased, which means that our methane emissions are also decreasing. In 1940, there were 140 million head of beef in the United States; today, there are only 90 million head. Notably, however, the same amount of beef (24 million tons) was produced in both 1970 and 2010, meaning that, over the years, we have begun accomplishing the same amount of beef with fewer cattle.

“This is thanks to improved fertility, health and genetics,” explained Dr. Mitloehner, who went on to argue that we should focus on better and more efficient livestock health than on livestock elimination.

3)     According to Dr. Mitloehner, there are two types of agricultural land. Two-thirds of the land can be defined as marginal land, which crops cannot be grown on for various reasons, such as poor soil or water restraints. As such, marginal land is used for ruminant livestock. The other one-third is arable land, which is ideal for crops. When others suggest that we halt livestock production, they are really suggesting the abandonment of usable land. With the population growing so quickly, Dr. Mitloehner asked, would it really be wise to ignore such a valuable resource?

“How can we feed three times the people (that currently inhabit the earth) in our lifetime if we aren’t using all the land we can to produce food?” he added.

To put it bluntly, agriculture has been the target of gossip; numbers have been skewed, media coverage has been exaggerated and farmers have been misrepresented.

“Unfortunately, for the longest time, this industry didn’t have data to show what their impact was,” said Dr. Mitloehner. “So, the notion was (that) you’re guilty until proven innocent.”

By utilizing Dr. Mitloehner’s expertise, however, we can become ambassadors of agriculture, farmers and the truth about agriculture’s contributions to climate change. With the population expected to triple by 2050, the question of how to feed the world remains — and we should thank our farmers for being part of the solution to that problem.

Dr. Mark Lyons: Unifying for a Planet of Plenty™

Post-COVID, there will not be a “return to normal.” According to Dr. Mark Lyons, president and CEO of Alltech, now, more than ever, we must take a leap of faith and recognize that it is up to us to make positive changes in our “new normal.” COVID-19 presents monumental challenges, but also innovative opportunities, particularly in...

As businesses and schools began closing due to the spread of COVID-19, the market for liquid eggs dropped while the demand for shell eggs in grocery stores increased. Dr. Kristi Scott, veterinarian for ISE in Maryland, discusses this shift in the sales of various egg products and how it has affected the industry in North America. This episode...