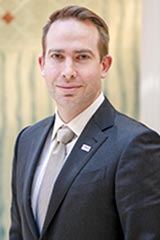 He began working with Alltech on its M&A strategy in 2010 while at Bank of America Merrill Lynch, served as an exclusive advisor to Alltech in 2018 and joined the company full time at its corporate headquarters in Kentucky in 2019.

Prior to joining Deutsche Bank in 2014, Speight spent 10 years at Merrill Lynch and Bank of America Merrill Lynch in the consumer group. Throughout the course of his career, he had the opportunity to advise on most of the major agribusiness M&A and capital-raising transactions. In addition to his primary work in agribusiness, he has advised on numerous transactions in the broader food and beverage and consumer space.

Born and raised in Iowa, Speight received his bachelor’s degree in finance from the University of Iowa. He currently lives in Kentucky with his wife and two children.