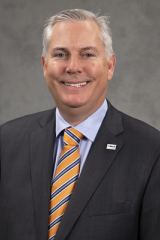 Brian McCawley is the chief commercialization officer at Alltech and is responsible for the commercial strategy and development of the organization, ensuring that all functions are aligned to meet the company's business objectives. Previously, he was the senior vice president of sales at Alltech, with a focus on Alltech’s North America additive business.

Prior to joining Alltech, McCawley spent 15 years growing Big Dutchman’s business in the Asia-Pacific region, with posts in Bangkok, Kuala Lumpur and Beijing. As vice president of sales for the region, he led Big Dutchman’s Asia-Pacific team through a period of tremendous growth. Then, while president of Big Dutchman’s operations in China, he built the country’s largest egg farm with 3 million layers and 1 million pullets on a single site.

After six years in China, he returned to the U.S. in 2016 to begin a new business unit for Big Dutchman that would deliver on customers’ requests for complete layer, broiler and pig housing systems. This represented a fundamental shift in the company’s approach, positioning Big Dutchman as a provider of turnkey farms. After establishing the new business division, McCawley served as its president and quickly expanded operations globally to four continents.

Prior to joining Big Dutchman in 2002, McCawley was international sales manager for Hired-Hand Manufacturing and American Coolair Corporation.

He received his bachelor’s degree in agricultural operations from the University of Florida in 1992. He and his wife have been married for 25 years and have three daughters.